Kathleen Wynne: 'I never took anything for granted'

Kathleen Wynne on winning, new jobs, old scandals, the province’s pension plan and the touchstone in her life 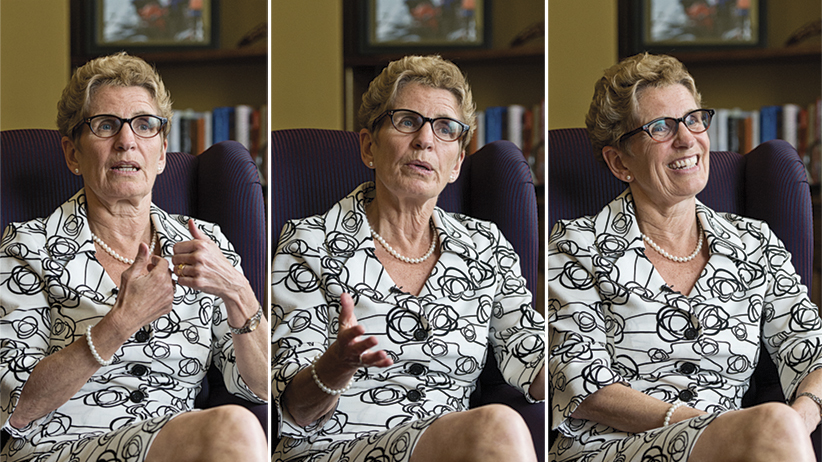 Listen to this interview here:

You underestimate Kathleen Wynne at your peril. Since taking over as Ontario premier from Dalton McGuinty 16 months ago, she has rejuvenated a scandal-ridden Liberal government by making big promises and tacking hard to the left. On June 12, voters rewarded her activist vision with a majority that few pundits or pollsters saw coming. She spoke with Maclean’s about what lies ahead for the country’s biggest province.

Q: You seemed surprised by your majority win. Why? Were your pollsters wrong too?

A: I think I was more pleased than surprised. We hadn’t known where we were going to land. There were polls all over the place: we were going to lose, or we had a majority, and everything in between. So I never counted on anything. I never took anything for granted.

Q: It was a campaign of stark choices: You were promising a lot of government stimulus; the Tories were promising austerity. So what message do you take away from this majority?

A: I think that people looked at some very clear differences and they chose the plan that was going to invest in them. Whether it’s the transit and transportation infrastructure they need in their communities, or whether it’s in a retirement pension plan that they, or their children or grandchildren need. They saw themselves reflected in the concerns and the investments we were talking about. That is what they want to see implemented.

Q: At the same time, turnout was just 52 per cent, and you won with 38.6 per cent of the popular vote. Isn’t that a message too? Are Ontarians turned off by their politics?

Q: Prior to the election, the polls indicated that more than 60 per cent of people in the province thought the Liberals deserved to lose, that it was time for a new government. What do you have to do to change that sentiment?

A: I think the election campaign went some way to doing that, but I am under no illusion that I don’t have to keep earning the trust of the people of the province. The way I have to do that is to be very upfront as we implement the plan we ran on. I have committed to openness, and doing what I said and telling people how it’s going.

Q: What mistakes did your predecessor Dalton McGuinty make?

A: I was part of that government. I have never tried to pretend that I wasn’t. I have a lot of pride in its accomplishments. But there were mistakes made. There has been a lot of discussion around the relocation of the gas plants, and the oversight of some of the agencies. What I’ve done over the last 16 months is to work to correct that, and work to learn from them so that the same issues don’t happen again. I want to make sure there is good, strong oversight and attention on agencies, and good accountability mechanisms from agencies to the government.

Q: You mentioned the gas plants. The OPP are still investigating that decision. You’ve committed to full disclosure and co-operation, but you’ve rejected calls for a public inquiry. Why?

A: There are couple of things going on. There is an investigation that will unfold. There was also a [legislative] committee that saw 90 witnesses or so and looked at hundreds of thousands of documents. That committee never got the opportunity to write a report. What I committed to during the campaign was to recalling that committee, and getting the report written and their advice. That’s the process that needs to be concluded.

Q: And after that?

A: We will take the advice of the committee.

Q: You said on election night that jobs and growth are your biggest priorities. You’ve also committed to reintroducing the budget you were defeated on within 20 days. How will that budget immediately address jobs and growth?

A: We will invest in transit and infrastructure, hospitals and schools. All of that bricks and mortar creates jobs in the short term, and a climate for investment and prosperity in the longer term. The second thing we have in the budget is a jobs and prosperity fund. We need to partner with business. Look at the jobs that came to Ontario in the past year, like Open Text and Cisco. They came because we have a competitive tax regime, but also because there’s a willingness on the part of government to invest and support them.

Q: You are also promising to erase a $12.5-billion deficit. Your platform did call for fiscal restraint further down the road. What sort of cuts do you have in mind?

A: We’ve laid out a path to balance the budget that continues many of the constraints that we’ve already implemented. Over the next couple of years we will continue to find savings in government. We’re the leanest government in the country, in terms of per capita spending. In our budget we’re asking the top two per cent of income earners in this province to pay a bit more. We’re looking at our assets and how they can work better for our province. On a number of fronts we’ve made decisions that will allow us to eliminate the deficit by 2017-18.

Q: During the campaign, you ruled out laying off public servants, and you’ve rejected recommendations about cutting programs. Are you telling people this can be done without pain?

A: Let me be clear: there is no new money for wages and salaries. That will mean that we will have very challenging collective bargaining processes. That will be one of the ways we will continue to constrain the growth of spending in Ontario. I have never said that there won’t be changes in government. We have made changes. Our minister of health has kept the increase in spending at under three per cent. No one else has done that. We’ve done it by changing the way we deliver health services, with home care and providing services where people want them. We can cut down on costs, and, more important, deliver better services.

Q: You enjoyed a lot of support from unions during the campaign. What do you think they expect in return?

Q: You came out swinging at Stephen Harper, saying he has mistreated Ontario. The federal Tories replied in kind. How are you going to repair that relationship?

A: Throughout the campaign we talked about our retirement pension plan and on that file, Stephen Harper and I have had a disagreement from the time that he indicated that he was not interested in supporting an enhancement to CPP. I think that’s the wrong decision, and there are leaders across the country who think that is the wrong decision. But there are other ﬁles I hope we can work together on very well—like the development of the Ring of Fire—that are in the best interests of the entire country.

Q: You met Hillary Clinton the other day, and she was quite effusive in her praise of you and your “progressive agenda.” You’re also the first woman to be elected premier of Ontario. Do you feel like you stand for something bigger?

A: Historians will weigh in on that. But I think it’s very important that we work always to have an inclusive political process. That everyone who lives in this province sees themselves reflected in some way in the decisions that are made by government and the people who represent them. We have some way to go, but I think it is significant that little girls can see that they can be the premier if they want to be. I will do everything I can to live up to the expectations of being a good premier as well as a female premier.

Q: Since the election, there’s been a lot written and said about how your sexuality wasn’t an issue—which is sort of contradictory . . .

A: I think it’s a wonderful thing, and I think it speaks volumes to that inclusive vision. I hope it means that the issue in terms of this office, and provincial politics, is now in the past, and that no one will have to face a homophobic response again. That would be a huge advance for us as a province.

Q: You’ve described your partner Jane Rounthwaite as your “touchstone.” What does she bring to you as a politician?

A: It was interesting. She travelled with me on the [campaign] bus. She’s just such a solid, sensible person who believes in my capacity. She and I met in history class at Queen’s University in 1972, and from that time we were best friends, and then our relationship changed. But she’s always had a view of the world that has helped me to understand it better. She’s got a great sense of humour, she’s smart, and she believes in a progressive vision of this province with the same depth that I do.