Ontarians set to vote — at least in theory 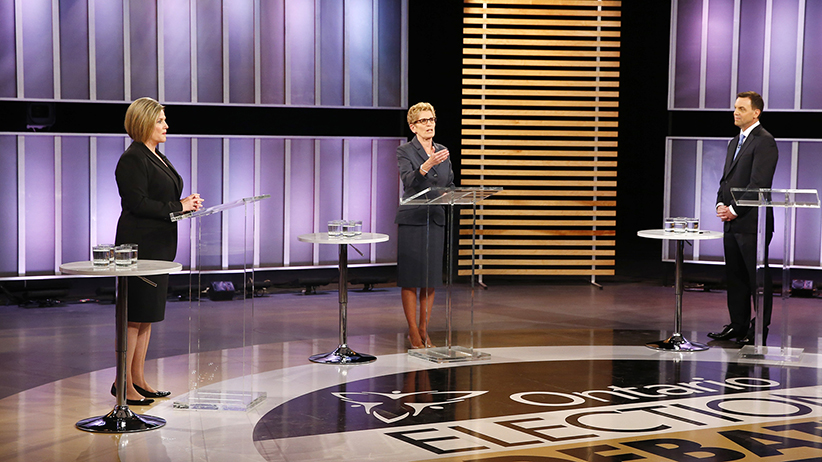 TORONTO — Uninspiring choices at the ballot box, negative campaigns and unprecedented involvement from organized labour have political observers worried that the upcoming Ontario election will be marred by yet another disappointing voter turnout.

Ontarians have shown a growing propensity to stay home on election day during the past two decades, with voter turnout numbers steadily falling from 64 per cent in 1990 to a historic low of 48 per cent in 2011.

Experts monitoring the most recent campaign say they fear voters have been given little incentive to buck the trend this time around.

Voters are usually galvanized by either a single hot-button issue or an active economic crisis, he said, adding none of those factors are present this time around.

More importantly, however, he said is the question of leadership. Rose said Liberal Premier Kathleen Wynne, Progressive Conservative Leader Tim Hudak and NDP Leader Andrea Horwath have all failed to capture the public’s imagination despite their stark ideological differences and clearly defined visions of how the province would look under their leadership.

“There is not a lot of enthusiasm for any of the leaders, in part because I don’t think any of them are inspiring,” Rose said in a telephone interview from Kingston, Ont. “They’re not motivating people to go out and vote because of some inspirational idea.”

The flat response to the front-runners seems to be born out in the various polls gauging public interest in the election.

The margin between voters backing Wynne and those supporting Hudak has levelled off at roughly one per cent among the most recent survey results, with undecided voters consistently pegged at more than 10 per cent.

Experts said the era of the disengaged voter makes it increasingly difficult to predict how the undecided voter will behave when election day rolls around.

Related: Blame the nerds for low voter turnout in Ontario

Eric Grenier, author of poll analysis website ThreeHundredEight.com, said the dip in voter interest leaves pollsters in a quandary as they try to gauge which parties have the most support.

“When turnout’s 70 or 80 per cent, the people you’re polling are probably also the people who are going to vote, so it’s not a big deal. But when turnout drops to 60 or 50 per cent, …that’s when turnout is a huge, huge thing,” he said. “The 100 per cent of people that can be polled can be very different from the 50 per cent who will actually vote.”

Grenier said the more useful approach is to look at the numbers of people who are likely to cast a ballot, since they stand a much higher chance of exerting some influence at the polls.

Determining that number, however, is a complex proposition.

Grenier said the practice of tracking likely voters is comparatively recent in Canada, adding the metric was adopted as a way for pollsters to keep their guesses accurate in the face of dwindling turnouts.

But every pollster has a different tracking methodology, he said, adding that while many of the approaches are sound, they all yield different results.

Projections from Ipsos Reid, for instance, indicate Hudak’s supporters are more motivated to cast their votes, while findings from Ekos Research suggest the ballot box advantage belongs to Wynne’s Liberals.

The group has often been characterized as engaged citizens weighing their democratic options, but is more likely to simply not be interested, he said.

“The assumption we have when we hear ‘undecided’ is, someone is sitting there at home thinking, ‘I should read over these platforms again. I just can’t decide now, I’m really thinking about it.’ But I don’t think that’s what it means to most people when they’re asked in a survey,” Wiseman said.

Rose said there are other factors that may give apathetic voters even more reasons to sit this election out.

Campaigns defined by partisan attacks, combined with unprecedented political statements from prominent police and media unions, may make the average voter feel both either coerced or superfluous, he said.

“Negativity breeds cynicism towards the process,” he said. “It plays into the cynical view that the real action is going on beyond the voters and they’re being manipulated,…and that organizations, either parties, unions or social groups, are making the decision for them.”

The personal barbs flying between the front-runners intensified in the dying days of the campaign to the point that even the party leaders were forced to decry the negative tone.

Wynne said Wednesday that her party crossed a line by distributing a flyer depicting Hudak walking away from an exploding hospital in a crude parody of the blockbuster film “The Dark Knight.”

Hudak was forced on the defensive after dozens of voters in London received letters directing them to the wrong polling station. Similar notices were allegedly also sent out to voters in an Ottawa riding.

The Tories said it was an innocent mixup and apologized, but the Liberals suggested it was a deliberate attempt at voter suppression and filed a complaint with Elections Ontario.

Grenier suspects the election results will ultimately be decided by which party has the more efficient organization on election day itself. The one that’s able to convince known supporters to get out and vote, he said, is the one that will carry the day.

“If (turnout) is going to be around that 50-per-cent mark again, it’s really going to matter who gets out the vote,” he said. “A lot of ridings, if it’s decided by a handful of points, it’s that organization that’s going to make the difference.”