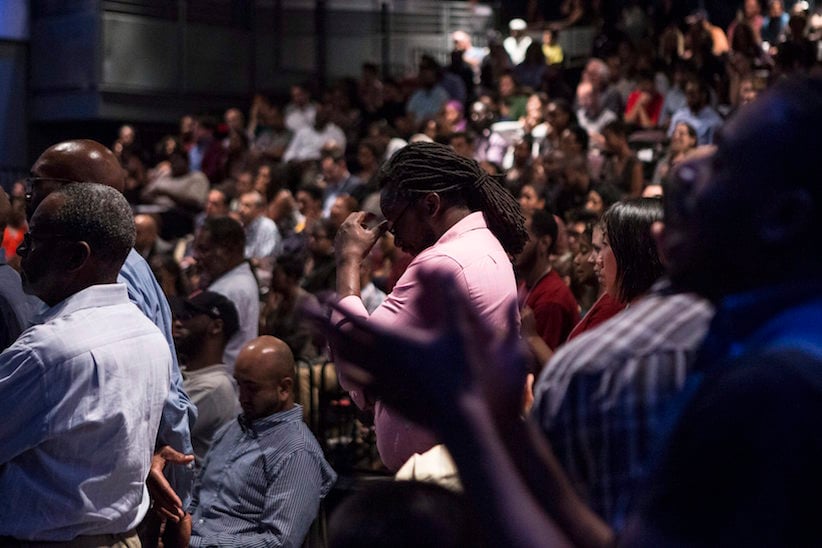 Members of the crowd listen to a speaker at an anti-racism meeting attended by Toronto Mayor John Tory and Ontario Premier Kathleen Wynne in Toronto on Thursday July 14, 2016. THE CANADIAN PRESS/Chris Young

“I understand that government institutions have not lived up to that,” she said. “Part of doing my job is acknowledging that we haven’t done enough.”

Audience members lined up to voice their opinions during the open consultation period, some waiting past the planned 9 p.m. end time to speak. The crowd crammed into overflow spaces well beyond the 300-person capacity of the meeting room.

The room broke out into cheers of “black lives matter” several times throughout the night as people spoke, with some speakers leading chants and singing songs.

Many were critical of government officials, saying that not enough concrete action has been taken to deal with racism despite years of activism.

MORE: The problem with ‘All Lives Matter’

Akua Benjamin was the first speaker at the microphone. She credited the activist group Black Lives Matter Toronto for calling for the public meeting and bringing people together.

“There hasn’t been a time in the last 50 years when we have not marched on the streets of Toronto calling out to put an end to racism,” she said.

“And so here we are again. … Here we are many years later doing the same thing, calling attention to the issue of racism. It really is a shame.”

Wynne and Michael Coteau, the province’s minister of children and youth services, opened the event with remarks to the crowd.

Toronto Mayor John Tory was also present at the meeting but unlike Wynne and Coteau, he did not have a formal slot to address the crowd.

However, he did speak after a woman asked him when he planned to have his own anti-racism community meeting.

Tory said he had agreed to two series of meetings in addition to the anti-racism directorate meetings, including consultations on a report on police reform in August.

MORE: Why the ‘Rogue Tenor’ indicted more than himself

Before the meeting, Wynne said that when people say “all lives matter” in response to the Black Lives Matter movement, it reminds her of people saying: “Why don’t straight people have a parade?”

Wynne, who is openly gay, also responded to questions about a member of The Tenors changing the national anthem’s lyrics at the Major League Baseball all-star game earlier this week to contain the controversial phrase “all lives matter.”

“I think what is heard by people who heard him sing that is that, ‘You don’t understand what we’re saying. What we’re saying is that there’s a particular issue,'” she said.

Wynne added it appears that tenor Remigio Pereira, who also held up a sign bearing the message, “made a big, big mistake in terms of his career.”

Also ahead of the anti-racism meeting, Wynne said Pride Toronto and Black Lives Matter Toronto will have to discuss their issues without her input.

Black Lives Matter temporarily halted the Pride earlier this month to make a series of demands that included more funding and better representation for racialized communities during Pride events. It also called for a ban on police floats in future parades.

Wynne said people can debate specific tactics, but the group is raising issues of systemic racism “that have to be taken seriously.”

Wynne stepped outside the Ontario legislature in April to speak to a crowd of Black Lives Matter protesters and told them she was willing to set up a formal meeting. That has not yet happened, but Wynne said Thursday that it would take place “later in the fall, perhaps.”