Six people ran to help Cpl. Nathan Cirillo. They were strangers back then. They are not now. 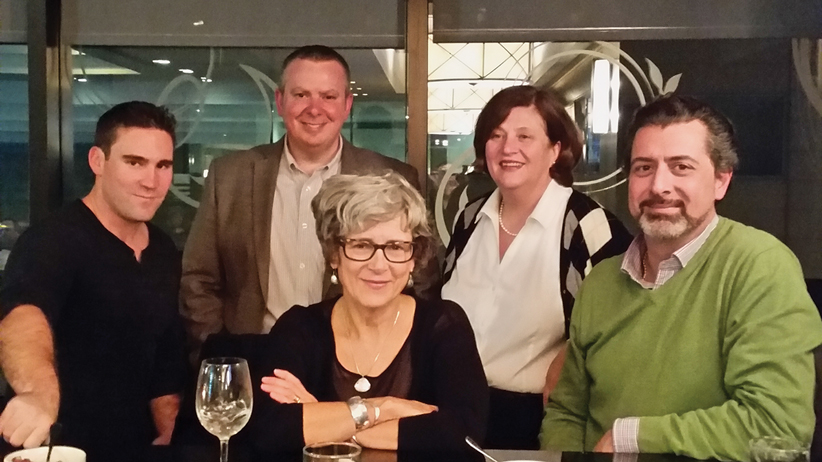 On Oct.22, a beautiful fall day, Barbara Winters, Margaret Lerhe and Martin Magnan—all strangers—walked by the National War Memorial in Ottawa, heading to various offices. Winters had her camera, so she took a few photos of the soldiers at the cenotaph. Col. Conrad Mialkowski, meanwhile, was driving past on his way to work. Across the street from the memorial, Anthony Wiseman—the driver for Gen. Tom Lawson, the chief of the defence staff—was waiting in his car while his boss had a meeting at the Prime Minister’s Office in Langevin Block.

It was a normal weekday.

Then they heard several shots—“pop, pop, pop,” as Magnan recalled—when Michael Zehaf-Bibeau gunned down Cpl. Nathan Cirillo, a 24-year-old reservist guarding the Tomb of the Unknown Soldier, and fired at Cpl. Branden Stevenson, the second guard on duty and Cpl. Cirillo’s best friend. The soldiers were holding rifles containing no ammunition. The shooter missed Cpl. Stevenson, who dove over a hedge and ran to get help.

It was the moment that would soon stun a nation, and turn this group of bystanders into Good Samaritans who demonstrated a courage and self-sacrifice embodied by the fallen soldier they tried to save. Just weeks before Remembrance Day, they captured the nation’s hearts.

Maclean’s #longread: Bearing Witness: An oral history of Oct. 22 as told by those who were there

Cpl. Kyle Button was also working at the memorial that day. He took cover, then went to Cpl. Cirillo’s side and put pressure on his wounds, trying to stop the bleeding.

Lerhe, a nurse, and Magnan, a communications adviser with the Department of National Defence, had a direct view of the shooter. Still, they darted toward the fallen soldier. So did Winters, a government lawyer. Within seconds of the shooting, Wiseman saw the gunman run from the memorial. He sprinted after him. When Zehaf-Bibeau got in his car and reversed toward him, Wiseman took cover in a bush. He looked up and the shooter was gone, so he hurried to the memorial to help Col. Mialkowski, who served in Afghanistan and knew the familiar sound of rifle fire. He turned his car around into oncoming traffic, parked on the sidewalk and raced to join the other first responders.

The group of six—civilians and military members—had a remarkable level of medical and trauma response training and took turns doing CPR, putting pressure on the wounds and encouraging each other. “[We were] telling each other, ‘That’s good,’ or someone might say, ‘Check this.’ Nobody was grandstanding,” Winters said after the shooting.

Magnan held Cpl. Cirillo’s hand. Winters talked to the soldier and prayed. “I kept telling him his parents would be so proud of him. That he was a good man.” The six, at this point, had no way of knowing whether the gunman would return or if there were other shooters. They focused on saving Cpl. Cirillo’s life.

When the 911 call came in, Anthony Di Monte, chief of the Ottawa Paramedic Service, was in his car leaving a city hall meeting about Ebola preparations. He drove 45 seconds down Elgin Street to the War Memorial. He later praised the group. He said Cpl. Cirillo died by the Tomb of the Unknown Soldier, though they tried again and again to revive him at the hospital. “It was an extremely traumatic entry and exit wound. We tried everything, everything.”

Tragedy can divide people. It can also bring them together. The night before Cpl. Cirillo’s funeral, five of the people who worked to save his life rented a van and drove from Ottawa to Hamilton. It was an emotional trip—the first time they had been together since the shooting. They met the soldier’s family for dinner. That same night, Di Monte and a colleague ran into the group at the bar at the local Sheraton hotel. “I didn’t recognize them at first. They invited us to come sit with them. It wasn’t planned but it was really nice. The real hero is the corporal who was doing an honourable job and whose life was taken away too young. But, for me, these people represented what is good about Canadians. They didn’t hesitate to do whatever they could to help. That reflects the humanity of this terrible event. They all said this event had changed their lives and rightly so.”

They are no longer strangers. The “team,” as the six call themselves, have kept in touch. They talk about that day and help each other move on. “I think we’re going to be friends for a really long time,” said Magnan. “We’ll go for a coffee or lunch and talk. We went for beers a couple of times, just like friends who you meet downtown. We call or email regularly, making sure everyone’s okay.”