Need to learn how to smoke pot? Ask the government.

Politics Insider for Jan. 7: Canada's troops in Iraq are in limbo, Chrystia Freeland heads west, and the Coast Guard is about to dismantle a heroic warship 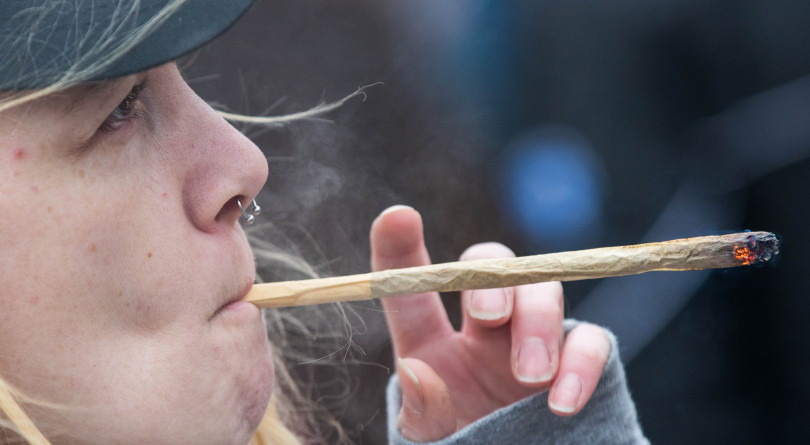 A woman smokes marijuana during the annual 4/20 rally on Parliament Hill in Ottawa on April 20, 2019. (Lars Hagberg/AFP/Getty Images)

Who wants to be Conservative leader? Senior Writer Paul Wells takes stock of the Conservative leadership campaign, which galloped into gear late last week. Wells muses about several prominent potential Tory hopefuls, and makes sure not to leave out Pierre Poilievre, an Ottawa-area MP who’s won six elections in a row.

Of course the Conservative finance critic makes Liberals furious, but he’s hardly universally popular among Conservatives either. That he is soft-spoken and thoughtful in private does him little good, since he’s just about only ever been a pit bull in public. He’ll be a formidable candidate if, as seems likely, he runs. And he may attempt a personality transplant, on the theory that his previous public persona was a carefully constructed artefact and can easily be swapped out for a new one.

Indeed, last night, the Toronto Star reported that Poilievre would launch a leadership campaign later this month. And whatever he does with his public image, he’ll apparently have the organizational muscle of two big Tories in his corner: John Baird, the former cabinet minister who’s writing the post-mortem on the party’s last failed campaign; and Jenni Byrne, a longtime senior campaign hand who recently served as Doug Ford’s principal secretary. [Toronto Star]

Canada has 500 troops stationed in Iraq. Half of them are part of a NATO training mission that was suspended soon after U.S. President Donald Trump ordered air strikes that killed Iranian general Qasem Soleimani. Over the weekend, Iraqi parliamentarians voted to expel foreign troops. The government has not yet responded to that non-binding vote.

Yesterday, NATO secretary-general Jens Stoltenberg appeared to suggest the NATO mission will eventually resume. Defence Minister Harjit Sajjan reiterated that message on Twitter (and confirmed to CTV News that Canada received no heads-up before the U.S. strike). Meanwhile, Foreign Minister Francois-Philippe Champagne tweeted a readout of a phone call with his Iraqi counterpart, Mohamed Ali al-Hakim. They agreed that “de-escalation” should be a priority—but there was no word on Canada’s troops on the ground. [CBC News, Sajjan tweet, Champagne tweet]

What instability means for Canada: We know that global oil markets and domestic stock markets don’t trade in a vacuum. They respond to international crises. You might expect headlines to scream that Canadians should brace themselves for catastrophe. But a Global News analysis says the “stakes for Canadian investors and motorists may not be as high as the political headlines suggest.” We have our own volatile job numbers and potential western recession to worry about. But at least gas prices aren’t spiking for most of us, right? [Global News]

Freeland has landed in the west: If the deputy PM’s new year resolution was to shake hands in the west, she’s a woman of her word. Yesterday, only six days in to 2020, Chrystia Freeland met Edmonton mayor Don Iveson, among the friendlier faces on her westward trip. Today, she’s set to meet Premier Jason Kenney in Edmonton, surely a testier tête-à-tête. Later, she’s headed to rural northwestern Alberta to hear from locals. [Global News]

What U.K. Labour can learn from a decade-old Gordon Brown rally: In his column from our print issue, Wells ponders the eternal questions that face left-leaning political parties when they’re out of power and looking for a leader. Do they prioritize principle over winning, or winning over principle? Read his tea leaves for yourself.

I’m not here to plead for the moderates over the true believers. Everyone must weigh the issues by their own lights. If you believe there’s an urgent climate crisis, why would you not support the candidate with the most ambitious climate plan? (Maybe because you don’t think that candidate or their party will win, a quiet little accommodation with electoral math that millions of people who voted Liberal in Canada this past October had to make for themselves.)

The Canadian Coast Guard announced yesterday a plan to remove a floating rust bucket from the Fraser River near Surrey, B.C. The fishing vessel, M/V Spudnik, is polluting the river and looking generally decrepit. But it has an explosive history. Sixty-five years ago, Spudnik was known as LSMR-401, a U.S. Navy ship that could fire hundreds of rockets at a time—and did, at North Koreans bent on taking over the Korean peninsula. Navy records say LSMR-401 won seven battle stars in that war. Those sailors never could have guessed how their ship would finally meet its end. [Coast Guard news, U.S. Navy records]

It’s by no means the biggest news of the day, but it’s what everyone should be talking about. No, we’re not referencing Prime Minister Justin Trudeau‘s new beard, distracting though it may be. The thing you need to know is your friendly Ottawa bureaucrats published a guide on how to consume cannabis. There’s clip-art, too—of weed brownies. Parents across Canada can finally offer federally sanctioned advice to their kids on how to smoke up.