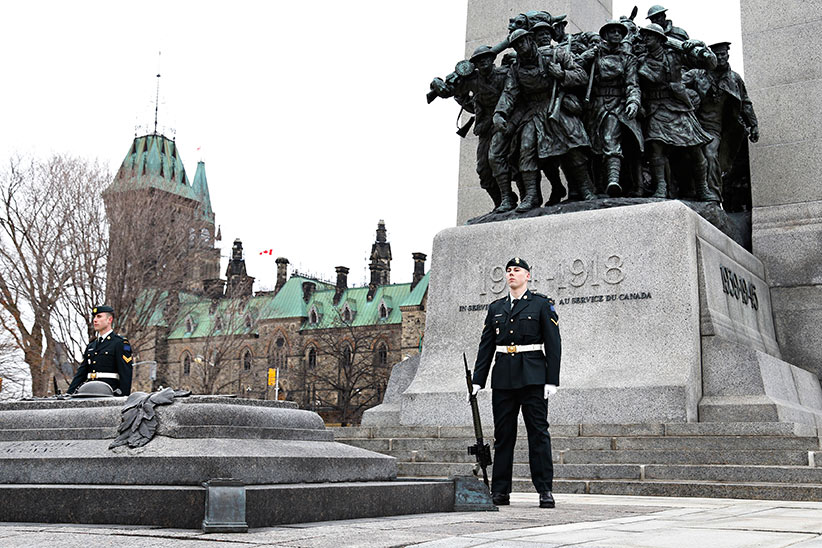 OTTAWA — Soldiers, veterans and hundreds of ordinary citizens joined dignitaries at the National War Memorial today to mark the first anniversary of the deadly attacks that killed two members of the military.

The memorial began with a 21-gun salute that echoed across downtown Ottawa.

On Oct. 22, 2014, Cpl. Nathan Cirillo, 24, was shot in the back as he stood ceremonial guard at the National War Memorial across the street from Parliament Hill.

From there, the lone gunman, Michael Zehaf Bibeau, stormed through the front doors of Parliament Hill’s centre block before dying in an hail of bullets, including from the gun of the sergeant-at-arms of the House of Commons.

The incident came 48 hours after Warrant Officer Patrice Vincent, 53, was murdered in a hit-and-run by an Islamic-extremist in Saint-Jean-sur-Richelieu, Que.

Downtown Ottawa was plunged into a day-long lockdown amid persistent — and ultimately false — rumours that multiple shooters might be on the loose.

A year later, people filed to the memorial to join members of the Cirillo and Vincent families, members of Cirillo’s regiment and representatives of police and first responders.

Public Safety Minister Steven Blaney, who was one of the Conservatives re-elected Monday, was among those who strode down Sparks Street towards the commemoration.

He says he went for a morning jog to the memorial at 7 a.m. to pay tribute to both fallen soldiers.

“Today our nation is coming together,” Blaney told The Canadian Press. “We are stronger than we were. … The elected prime minister will be there with our right honourable Mr. Harper.”

Harper issued his own written statement in advance of the ceremony, paying tribute to Cirillo and Vincent.

“On this day let us also pay tribute to all the security forces, medical personnel and brave citizens who risked their safety to stop the attackers and help those injured,” said Harper.

“It was inspiring to see how Canadians came together in the aftermath of these attacks.”

Trudeau echoed some of that in his own statement:

“Our servicemen and women, who have put their lives on the line for their country, stand for the very best of what it means to be Canadian. We will live up to our sacred obligation to Canada’s men and women in uniform, our veterans, and their families.”

The ceremony included a CF-18 flypast.

Blaney said he has a “profound sense of mission accomplished” after a year of leading the Conservative government’s controversial response to the attacks.

During the past year, long-standing security gaps on Parliament Hill have been addressed and controversial new anti-terrorism legislation was enacted. More changes could be in the works once a pair of security studies are completed.