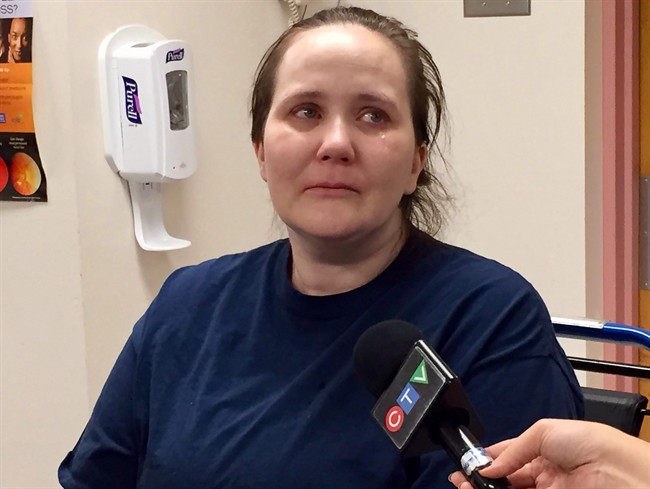 Fliss Cramman speaks to the media at her detention review hearing at Dartmouth General Hospital in Halifax on October 21, 2016. A 33-year-old mother of four who was facing deportation will be allowed to stay in Canada, her lawyer says. Fliss Cramman was due to be deported to her native Britain as early as Dec. 16 after a drug conviction. She has lived in Canada since she was eight years old, but her parents and other guardians failed to obtain her citizenship. (Aly Thomson/CP)

HALIFAX – Canada’s immigration minister has granted permanent residency to an ill woman who was born in Britain but grew up in Canada under difficult circumstances, citing compassionate grounds in an unusual case that raised questions about what it means to be a Canadian.

The Canada Border Services Agency wanted to deport Fliss Cramman after she was convicted of a drug offence in 2014 and served 27 months in prison.

But in an unexpected move, Immigration Minister John McCallum intervened in the high-profile case Friday, saying the 33-year-old mother of four could stay in Canada as a permanent resident, based on humanitarian considerations.

“I feel overwhelmed and happy — really, really happy,” Cramman said at the conclusion of a brief Immigration and Refugee Board hearing at the Dartmouth General Hospital. “It surprised me big time … To be honest, it shocked me.”

Having lived in Canada since she was eight years old, Cramman said the deportation order never made sense to her because she didn’t know she wasn’t a citizen. At the age of 11, she was moved into foster care, where her status as a citizen was never resolved.

“I’ve been here so long, it’s my life,” she said, a tear rolling down her cheek. “If I had gone back to England, I’d be feeling like I was getting sent to Africa or something.”

Cramman has long struggled with abuse, anxiety and chronic pain.

And she is recovering from surgeries she needed after she was rushed to hospital from a prison facility on Aug. 12 suffering from a perforated bowel.

Her physician, Dr. Alex Mitchell, told a recent deportation hearing that Cramman has significant addiction and mental-health issues. At the time, he said it would be “inhumane” to ship her back to a country where she would have no support.

Cramman’s case attracted national attention when her supporters revealed that while awaiting deportation on Dec. 16, she remained shackled to her hospital bed and under guard.

Julie Chamagne, executive director of the Halifax Refugee Clinic, said she was stunned by McCallum decision.

“I have never seen it happen at this stage (and) I’m … relieved and so happy that the minister … realized how unfair and horrific it was,” she said after the hearing.

“I don’t think this would have happened a year ago,” she said. “It is a reflection that we’re a little bit more compassionate, more understanding and able to see the big picture.”

Cramman has long-standing mental health issues, and a drug addiction that set in following years of physical and sexual abuse. In the worst instance, Cramman said she was sexually assaulted and tortured for hours on Christmas Day when she was 16.

Cramman said she was exposed to heroin a few years ago and quickly developed a taste for it, leading her to become part of a Facebook scheme to sell the potent drug.

Cramman has four young daughters living in Ontario, where she spent most of her time growing up.

“I can reconnect with them down the road,” she said.

She is expected to leave the hospital within a few days and move to a halfway house in Cape Breton, where she will be on parole.

“I can’t wait to just step out of the hospital and touch the grass … For me to just move around, I’m just ecstatic.”

When asked what she hopes to do once she is feeling better, Cramman said: “I’m going to be giving back to society big time.”

She said she wants to work as a counsellor for women caught in the legal system.

“It was a refreshing response from the minister of immigration and, hopefully, a sign of a government that really cares for the women that we work with.”