Ottawa shooting: Cobbling together a narrative from shards 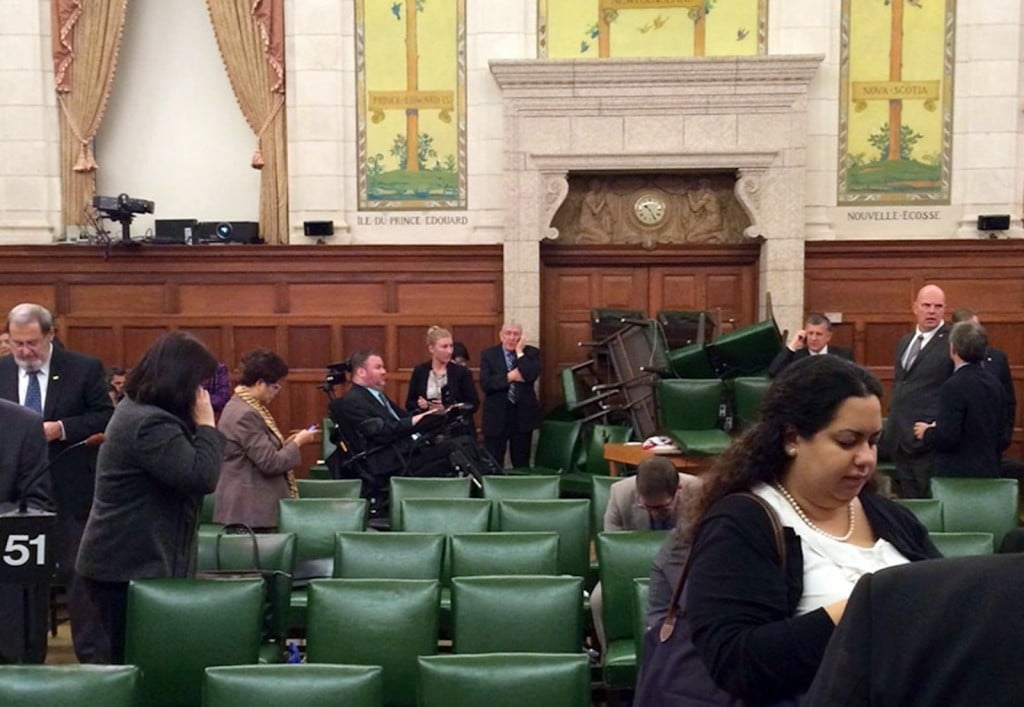 Conservative MP Nina Grewal took this photo of MPs barricaded in a meeting room on Parliament Hill on Wednesday after shots were fired in the building.

In a telling sign of this country’s lack of experience with potential mass gun crime and acts of terrorism on its soil, CBC Radio didn’t cut away from its pre-taped, one-hour interview with Liberal Leader Justin Trudeau when news broke at 10 a.m. that a soldier had been shot in front of the National War Memorial. Equally telling was the fact that, as Trudeau continued chatting to Jian Ghomeshi—long before any hard facts were known—Twitter was ablaze with attacks on both the Liberal and NDP stances on Islamic State, based on the presumption that the shooting was a terrorist attack. Steven Luft tweeted: “I wonder if the @liberal_party will condemn terrorists now? Or are today’s shooters just misunderstood too @JustinTrudeau?”

Dale Held was more brutal: “@JustinTrudeau hey idiot think we still need to be nice and talk to these people? #timetofightback.”

We still don’t know that the shooting was an organized terrorist attack, but the immediate public reaction provided a snapshot of how terrorism works: by creating chaos and uncertainty, stoking rumour and fuelling divisive anger.

Information was free-flowing, even though little of it was confirmed. Writ large was the human instinct to create a narrative, to cobble the shards of information into a story that made sense, even if it was simply guesswork. Without actual evidence, associations were made with historical terrorist attacks in an eerie echo of the hours after 9/11, as a nation braced for more violence. A straight line was drawn between the Ottawa shooting and the hit-and-run near Montreal on Monday that killed one member of the Canadian Armed Forces and injured another, perpetrated by a driver with jihadist sympathies who had been monitored by police for months.

Another detail given oxygen was a witness’s recollection that the scarf covering the Ottawa gunman’s face had Arabic designs on it. By noon, Britain’s Daily Mail, a paper never afraid to sensationalize a story, was quoting the Ottawa Citizen: “Witnesses also told the Citizen that they saw a man wearing an ‘Arabic scarf’ and carrying a long rifle, while others said the suspect looked South American.”

In Canada, the double-barrelled shotgun allegedly carried by the shooter was referred to repeatedly as a “long gun,” a term that summoned inevitable associations with the long-gun registry, a controversial program terminated by Prime Minister Stephen Harper in 2012. Only days earlier, the Prime Minister complained publicly that bureaucrats wanted to bring it back.

Related:
How the terror unfolded in Ottawa
Parliament Hill shooting leaves soldier, 1 suspect dead
Ottawa shooting: In the shadow of the Toronto 18
Interactive timeline: What happened in Ottawa

Like a spreading virus that immobilizes the public, the lockdown extended ever farther, from Parliament Hill to the University of Ottawa, to schools and the Rideau Centre shopping mall. (By 2 p.m., we were told there had been no incident at the Rideau Centre, as had been earlier reported.)

Amid wildly conflicting reports, the RCMP took to Twitter for leads, and barricaded parliamentarians became stringers for national news outlets. Conservative MP Tony Clement tweeted that 30 shots were heard inside the Centre Block on Parliament Hill. Meanwhile, a Globe and Mail reporter captured on video a harrowing scene that saw a Parliament building hallway become a scene out of a SWAT-team drama. More than an hour before official confirmation, cabinet minister Jason Kenney tweeted news that the reservist who’d been shot had died.

CNN, meanwhile, had begun its continuous coverage of the shooting by noon, under the banner “Numerous gunmen in Ottawa attacks.” The network’s extensive experience covering mass shootings and attacks on its own nation’s capital provided a stark contrast to Canadian networks’ freshman forays into terrorist attacks on home soil. As Peter Mansbridge filled time describing the street layout of Ottawa and recalling the War Measures Act of 1970, CNN correspondent Christiane Amanpour spoke to Wolf Blitzer about Canadian citizens fighting in Syria. “This idea of homegrown citizens being militarized is taking place in Canada,” she said. “We have no idea if this has anything to do with that.” CNN also considered the bigger picture, noting that NORAD was considering the possibility of combat air control over Ottawa, before turning to a White House briefing that nicely summarized what we knew. “The details are sketchy,” Obama press secretary Robert Gibbs told the room, adding that the President would soon speak to Prime Minister Harper.

A slideshow on CNN’s website showed the world a Canada it had never before seen: Parliament Hill transformed into a militarized zone wrapped in yellow police tape, and tactical officers of the RCMP—a police force known internationally for wearing jaunty scarlet dress jackets and posing on horses—wearing khaki military gear.

Coverage by midday in the American media showed how a story could be trumpeted or tamped down. The New York Post announced: “Hunt on for more shooters after gunman in headscarf kills Canadian soldier.” The Washington Post had a more sober take: “Soldier killed in shooting near Parliament Hill in Canada.”

“Parliament Hill is usually a sleepy place; it’s far from that today,” said Mansbridge later in the day. The newsman, who has covered Canadian breaking news for decades, seemed numb as he reported that soldiers were being told not to wear their uniforms in public. “I can’t remember anything like this,” he said. “This is something entirely new for a generation of Canadians.” 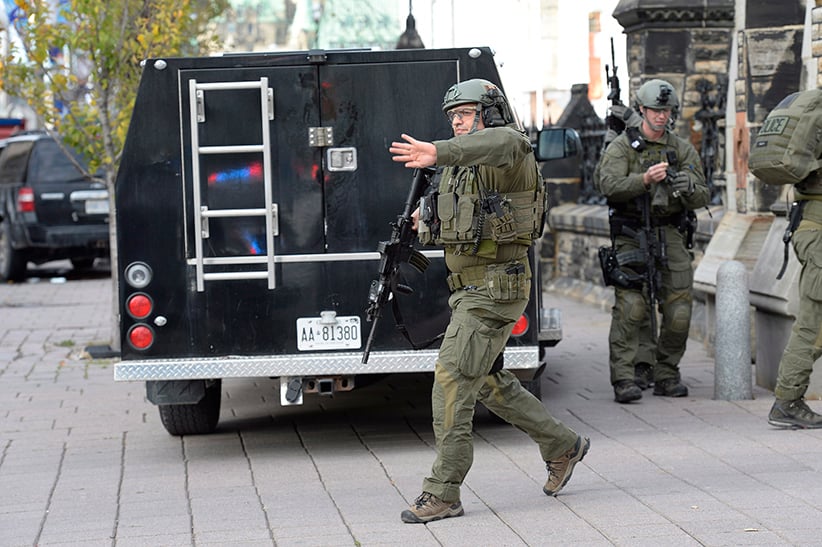