The discovery of HMS Erebus, one of Sir John Franklin's lost ships, is punctuated by the find of its bell, with all its symbolic value

Ice and snow have returned to Canada’s Arctic, and to other parts of Canada as well, but the federal government still managed to coax one more public revelation from last summer’s historic discovery of HMS Erebus, one of Sir John Franklin’s lost ships.

Environment minister Leona Aglukkaq revealed during a press conference Thursday that Parks Canada divers recovered a ship’s bell from the Erebus wreck back in September. The bell, made of bronze and embossed with the year 1845, was brought to the surface after two days of diving on the wreck, located in shallow water in the eastern part of the Queen Maud Gulf. 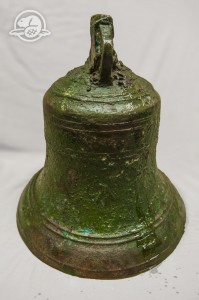 The artifact is a “symbolic embodiment of the ship itself,” as it would have been used to mark the passage of time onboard the vessel, struck every half-hour, day or night, as well as to signal the change of the crew’s watches, the government said in a statement. Erebus was one of two ships that went missing during the ill-fated British expedition to chart the Northwest Passage in 1845. Franklin and his crew became trapped in ice and eventually perished amid Inuit tales of exposure and, possibly, cannibalism.

Marc-Andre Bernier, a Parks Canada underwater archeologist, says the object of the dives wasn’t to recover artifacts, but that an exception was made for the bell because of its “iconic nature,” and because it would help positively identify the ship as Erebus (its sister ship, the HMS Terror, has yet to be located). He added there was also a threat the bell could be damaged by the ice that scrapes along the seabed.

It’s also possible the federal government was keen to bring home a key piece of Arctic history. Ottawa poured resources into this year’s hunt, the sixth since 2008, and Prime Minister Stephen Harper has made no secret of the fact that he views Franklin’s tragic expedition as a key part of Canada’s national story. Private sector partners that joined in the 2014 search included Shell Canada, the Royal Canadian Geographical Society and Jim Balsillie’s Arctic Research Foundation.

As for why Ottawa waited six weeks to reveal it had recovered the bell, a spokesperson for Parks Canada said the archeologists wanted to take the necessary time to investigate and confirm the find, as well as take initial steps to stabilize the artifact. That included keeping it damp during transport to prevent further corrosion after more than a hundred years submerged in saltwater. “It was bubble wrapped and kept humid,” said Bernier. Now, the bell, submerged in fresh water, is undergoing a painstaking months-long cleaning and preservation process, including chemical baths designed to extract salt from its surface.

Rear Admiral John Newton, commander of Maritime Forces Atlantic, said ships’ bells have long had an emotional connection for sailors. He spoke of a tradition that began in the Royal Navy in which sailors’ children are baptized with water from an upturned ship’s bell, and their names later inscribed under its lip. “Every ship has a bell,” Newton said. “It comes on commissioning and stays with it forever.” Even in the deep.