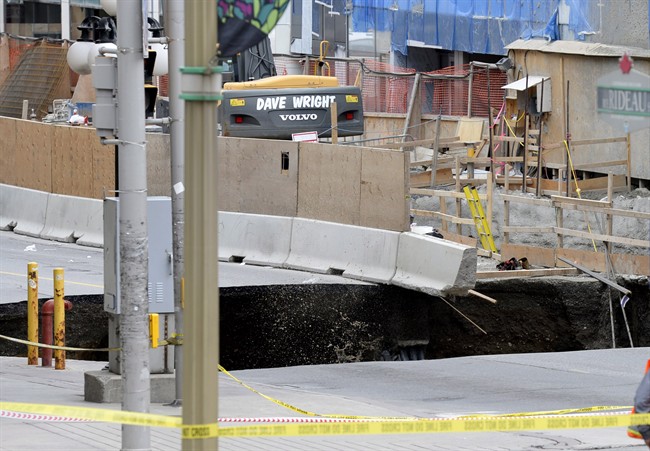 Water splashes as falling debris hits the bottom of a large sinkhole that formed on Rideau Street next to the Rideau Centre mall, on Wednesday, June 8, 2016 in Ottawa. (Justin Tang/CP)

OTTAWA – A gaping hole has opened up in a busy downtown thoroughfare just blocks from Parliament Hill.

Police say 911 calls started coming in at mid-morning and they have been blocking off streets surrounding the cave-in at the corner of Rideau St. and Sussex Drive.

No injuries have been reported, although a taxi van is believed to have been swallowed up by the sinkhole, which television footage shows was full of water from a broken water main.

The city says nearby buildings have been evacuated because of the smell of gas.

Water service in the area has been cut and traffic has been re-routed.

The road itself had been limited to bus and taxi traffic only since last summer due to road and subway construction.

This is the second sinkhole to open up in the downtown in recent years.

In 2014, another road just a few blocks away collapsed. Officials blamed it on unexpected soil conditions encountered during a tunnelling operation.