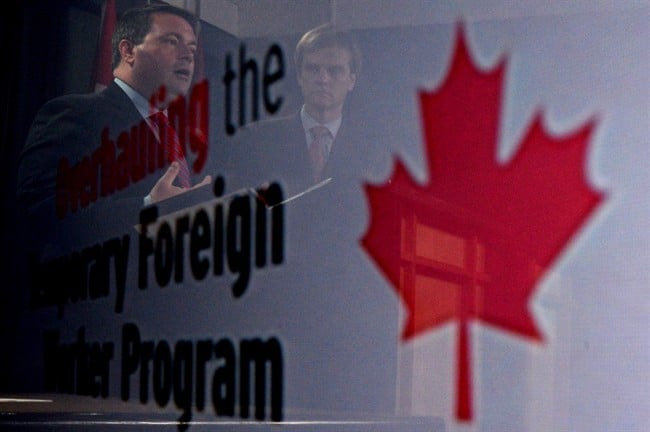 Employment Minister Jason Kenney, left, and Immigration Minister Chris Alexander are seen in a reflection at a news conference in Ottawa on Friday, June 20, 2014 on reforms to the Temporary Foreign Worker Program. (Sean Kilpatrick/The Canadian Press)

VANCOUVER – The federal government’s planned overhaul of the temporary foreign worker program has done little to calm debate in British Columbia, where revelations about foreign workers in a range of industries — from fast food to mining — helped push Ottawa toward reform.

The Conservative government announced a series of changes last Friday designed to make it more difficult and more expensive for companies to use temporary foreign workers, particularly for low-skilled jobs such as those in the fast-food industry.

Use of the temporary foreign worker program, which is designed to allow companies to meet temporary labour shortages, has increased significantly, from about 100,000 workers across the country in 2002 to more than 300,000 today.

In B.C., several revelations about how companies are using the program have fuelled controversy.

In 2012, a Chinese-owned mining company, HD Mining, received approvals to bring in roughly 200 miners from China to work on a proposed coal project.

Two unions filed a lawsuit in an attempt to block HD Mining’s foreign worker permits, alleging the company did not do enough to ensure Canadians were considered first. The unions lost the case.

Earlier this year, news reports alleged three McDonald’s franchises in Victoria were misusing temporary foreign workers, prompting the federal government to announce a moratorium on the food service industry’s use of the program and making the sector a target for Ottawa’s recent changes.

Jim Sinclair, president of the B.C. Federation of Labour, said no amount of reform can change the fact the program will still allow companies to hire foreign workers instead of Canadians.

“The program is still going to exist — they just found ways to massage public opinion so they can continue with it,” said Sinclair.

The federal government’s proposed changes will prevent employers in areas of high unemployment from applying for temporary foreign workers in the lowest wage and skill groups. It also caps the number of foreign workers employers can use and dramatically increases fees.

Sinclair said the proposed changes will do nothing to help the foreign workers themselves.

Sinclair argued that it doesn’t make sense to tie the program to unemployment rates, particularly in heavily populated regions such as the Lower Mainland where companies are essentially drawing from the same workforce. For example, Vancouver’s relatively low unemployment rate would allow foreign workers to be used there, but companies in nearby Abbotsford, which has an unemployment rate of 7.6 per cent, would not.

Ian Tostenson, president of the B.C. Restaurant and Food Services Association, which has defended the industry’s use of the foreign workers, said the changes will hurt restaurants.

He said only looking at jobless rates fails to take into account whether unemployed workers in a particular area are able to or even want to work in the positions that need to be filled.

“Are we sure that in areas of high unemployment that the group of people who are unemployed are matched for the jobs that are opening?” he said.

Critics have claimed the program drives down wages, because companies that pay at or near minimum wage can bring in foreign workers rather than offer better pay to attract Canadians.

A report published earlier this year by the C.D. Howe Institute, a non-partisan public policy think-tank, suggested the program actually increased unemployment rates in B.C. and Alberta. The report said one of the program’s goals is, in fact, to keep wages from “rising precipitously” in response to a shortage of workers.

The B.C. government, which emerged as a vocal supporter of HD Mining’s use of the program, reacted to last week’s announcement only by saying it would be reviewing the proposed changes.

“Our province is on the verge of unprecedented growth and I want to make sure there are no unintended consequences that hinder economic development in B.C.,” said a written statement from Jobs Minister Shirley Bond.

B.C.’s Opposition New Democrats said the provincial government should have demanded that Ottawa hand over more control of the program.

“This is a once-size-fits-all approach and we have distinct needs from coast to coast,” said NDP Leader John Horgan.

“Here in B.C., the program is heavily subscribed and I believe that’s a disincentive to employers to look for training opportunities.