‘God separated us as an island’

Mike McGeoghegan on the Confederation Bridge that he vehemently opposed

Even now, nearly two decades after the ribbon-cutting ceremony, Mike McGeoghegan has a hard time looking at the bridge. Enduring symbols of defeat don’t come much bigger than a $1-billion, 13-km stretch of concrete. “It was like getting sucker-punched in the side of the head,” he says. “You get over it after a while, but the memory is still there.”

For more than a century, it was the dominant debate on Prince Edward Island: to build or not to build, a fixed link connecting the country’s smallest province to mainland Canada. The “yes” side trumpeted the economic potential, promising that a year-round road would attract more jobs and tourists than the ferries criss-crossing the Northumberland Strait. The “no” camp envisioned borderline bedlam, from an influx of drugs and prostitutes to the end of “the Island way of life.”

A father of seven who made his living trapping lobsters, Mike was among those firmly opposed. He worried most about possible environmental damage, especially to the fisheries, but his objections were sentimental, too. “God separated us as an island,” he often says. “If He had wanted to hook us up, He would have done it at the time.”

A giant of a man (six foot four, 270 lb.), Mike became a vocal spokesman for Friends of the Island, an anti-bridge coalition that fought the project at every turn. The group’s campaign reached fever pitch in the late 1980s, when the province called a plebiscite to settle the question once and for all. “We thought we did a real good job explaining all our points to everybody we could,” he recalls. “But we were up against the federal government and their so-called experts.”

When the votes were tallied in January 1988, the answer was loud and clear: yes. The race wasn’t even close, with nearly 60 per cent in favour and barely 40 per cent against. 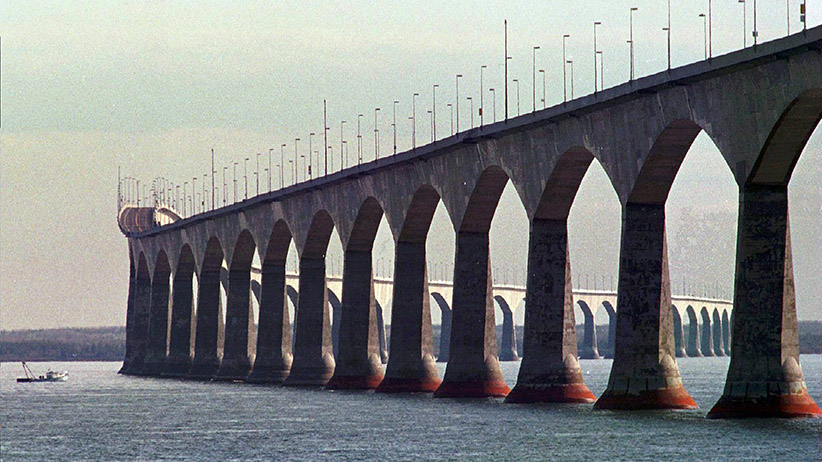 The Confederation Bridge welcomed its first car on May 31, 1997. (Andrew Vaughan/CP)

Mike could do little else but watch the construction from afar. A tradesman as well as a fisherman, he was actually offered a job on the project. He declined. “I said: ‘Absolutely not.’ My name wouldn’t be worth five cents if I went to work on that thing.”

The Confederation Bridge, joining Borden-Carleton, P.E.I., to Cape Jourimain, N.B., welcomed its first car on May 31, 1997. Nineteen years later, Mike is now 66—still working the waters near his beloved home, and still welcoming grandchildren (19, at last count). Steadfast but not unreasonably stubborn, he admits his group wasn’t right about every prediction. The lobster fishery did collapse (which may or may not have been linked to the bridge), and the promised prosperity was greatly exaggerated. But the tourism industry has flourished, he says, and “the riff-raff didn’t show up like we thought it would.”

Even Mike, the harshest of critics, takes drives along his nemesis once or twice a year. “I said so many nasty things about it I figured I would fall into the water,” he laughs. “Like anything else, once it was there you might as well use it.” — Michael Friscolanti