One had a political coming-out, the other a hockey love-in with the sport’s most loyal fans. A tale of the tape between Pierre-Karl Péladeau and P.K. Subban. 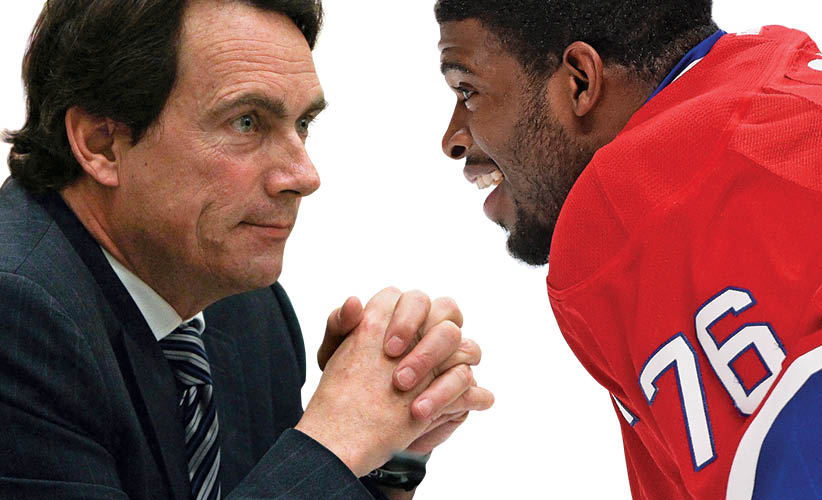 Pierre-Karl Péladeau: Quebec’s business-first mini-titan has strayed from his right-wing perch as of late, if only to convince the curmudgeonly lefties in the Parti Québécois, a party he hopes to lead, that he isn’t the second coming of Attila the Hun.

P.K. Subban: A defenceman for the Montreal Canadiens, whose favoured spot on the left-hand point is the equivalent of a sniper’s perch, P.K. often strays from his own defensive position, forcing coaches and fans alike to wonder whether he’s a wannabe forward.

Péladeau: The media magnate, still Quebecor’s majority shareholder, has been bypassing journalists in his own empire, airing grievances on his social media pages instead. According to PKP’s bon mots, Quebec Premier Philippe Couillard wants to “make all us Quebecers into good Canadians” and the newspaper La Presse, owned by one of Quebecor’s biggest competitors, is in bed with Big Oil.

Subban: The defenceman can jaw with the best of them, and seems to feed on the fury his words incite. “If they hate me, great. Hate me. We’ll just keep winning,” he said during last season’s epic playoff series against the Bruins. He is one of few NHL players to have a dedicated online “Hate Club” cataloguing “the dirtiest player in the NHL.” It’s a demonstrably false moniker, indicative of P.K.’s ability to make his opponents overreach.

Péladeau: PKP had a tumultuous relationship with his father, the self-made print magnate Pierre Péladeau. So disgusted was PKP with his father’s wealth and trappings that he changed his middle name from “Carl” to “Karl” as an ode to Karl Marx. Suffice to say, his love affair with Communism didn’t last.

Subban: Pernell Karl comes by his middle name more honestly; he inherited it from his dad, a retired school principal. Karl Subban fell in love with hockey after moving to Sudbury, Ont., from Jamaica in 1969, and would schlep his son to practice at ridiculous hours. His mother often dressed young P.K. in hockey gear at bedtime so he’d be ready.

Péladeau: Before exploding out of the separatist closet last spring, PKP spent much of his career obscuring his political leanings. He draped himself in the Canadian flag when launching the blindingly patriotic Sun News Network, only to doff the Maple Leaf for a fleur-de-lys while selling cellphones and the like to Quebecers. This political meandering was good for business but strained his friendship with former prime minister Brian Mulroney.

Subban: Subban meanders and pirouettes, the puck seemingly Crazy-Glued to his stick, in an on-ice dance that often finishes with an improbable and unassisted goal. Or he’ll take a pass and uncork a criminally hard one-timer. Sometimes he passes cross-ice directly to the opposing team, straining his relationship with his coach. He is magnificent if only because he can be so infuriating.

Péladeau: PKP’s insouciant fist pump, accompanied by proclamations of his desire to see Quebec become an independent country, hamstrung the PQ’s already wobbly election campaign last March. Though the sovereignist party went on to suffer its worst defeat in its history, PKP has doubled down on the separatist talk, recently musing that federalism is responsible for bad train service in Quebec.

Subban: In 2013, Canadiens coach Michel Therrien outlawed Subban’s hand gesture of choice, in which he exchanged five “low fives” with goalie Carey Price following a win. This hasn’t stopped P.K. from performing his post-goal routine, where he streaks down the ice, falls to one knee and pulls an imaginary bow aimed at the arena rafters. It’s both graceful and boastful, much like Subban himself.