Vancouver study is a world's first 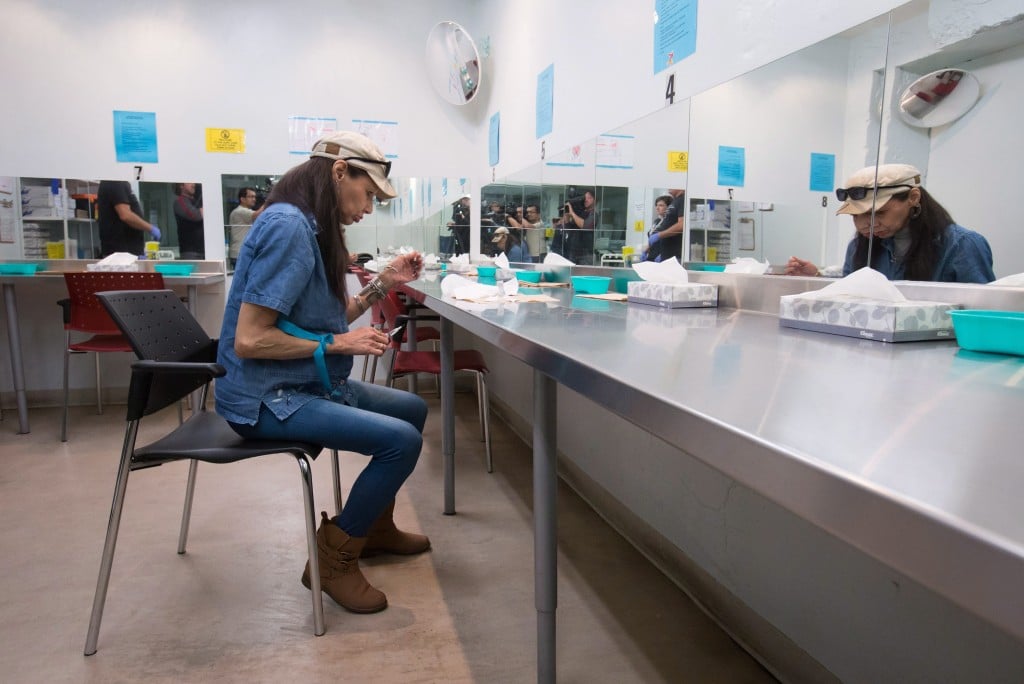 Tracey Loyer prepares to inject herself with hydromorphone at the Providence Health Care Crosstown Clinic in the Downtown Eastside of Vancouver, B.C., on Wednesday April 6, 2016. A Vancouver study suggests severely addicted heroin users could be treated with an injectable pain medication. The Study to Assess Longed-Term Opioid Medication Effectiveness, or SALOME, found hydromorphone is as effective as a pharmaceutical-grade heroine for people who do not respond to methadone or suboxone. THE CANADIAN PRESS/Darryl Dyck

VANCOUVER – For nine years, Max’s life spiralled out of control as a heroin addiction following a car crash had him living on the streets, barely eating and constantly hungering for his next fix.

Methadone treatment failed, and he thought he’d die. But in 2011, he was recruited into a study to test the effectiveness of a pain medication called hydromorphone versus pharmaceutical-grade heroin for addicts after other treatments hadn’t worked.

Max didn’t know which of the two medications he was getting as part of the four-year study, but he knew one thing: he wasn’t craving illicit heroin, and he wanted to live.

“I turned 50 yesterday,” Max, whose last name was not released, told a news conference Wednesday as researchers announced the results of a groundbreaking trial involving 202 participants.

The results of the world’s first such study involving hydromorphone are published in the Journal of the American Medical Association Psychiatry.

Researchers from Providence Health Care, the Centre for Health Evaluation and Outcome Sciences at St. Paul’s Hospital, and the School of Population and Public Health at the University of British Columbia said the results underscore the urgent need for more treatment options for chronic addicts.

“I’m not sure I’d even be here today if I didn’t take this study,” said Max, who learned he responded to hydromorphone, which didn’t get him “stoned” but helped to wean him off heroin and put him on a path to getting his life back.

“When I first entered the program I was homeless, I was committing crime to get my fix,” he said, adding others “are screaming for help” because they too have hit bottom.

The study’s participants injected either hydromorphone or the pharmaceutical-grade heroin three times a day at a clinic under medical supervision and with the support of medical staff, counsellors and social workers who helped with other aspects of their lives, such as housing.

Lynda, 48, whose last name also wasn’t released, said she responded to supervised prescribed heroin, or diacetylmorphine, after years of heroin addiction that gripped her life, especially following the murder of her 23-year-old son.

The study followed an earlier trial, the North American Opiate Mediation Initiative, which took place in Vancouver and Montreal between 2005 and 2008 and suggested diacetylmorphine is an effective treatment for severely addicted heroin users when methadone doesn’t work.

“We have been trying to get this going for 20 years,” she said of the study, adding hydromorphone or the prescribed heroin, needs to be given under medical supervision in case of overdoses so more clinics must open in other jurisdictions.

“It’s a statement of what we want to be as a society,” she said. “If a treatment is not working what are we going to do to help people who need it the most?”

Dr. Scott MacDonald, the lead physician at the Crosstown Clinic in Vancouver’s Downtown Eastside where the study was done, said he is still treating people including Max with hydromorphone.

“Whether you’ve been using five, 10 or 15 years this could help you,” he said. “It’s safe, it’s effective and most importantly, it’s available now.”

Following the North American Opiate Mediation Initiative, the federal government refused to allow participants who responded to the prescribed heroin to keep taking it.

In May 2014, a B.C. Supreme Court judge issued a temporary injunction for 110 people to continue being treated with diacetylmorphine, which is not approved in Canada.

Five plaintiffs and Providence Health Care are part of the case. A trial has been scheduled for October.

Health Minister Terry Lake said the latest findings shine a new light on how people with heroin addictions can be supported if they have not responded to other treatment.