A wildfire whipped by winds has spread into the outskirts of the major Alberta city, forcing tens of thousands to flee their homes 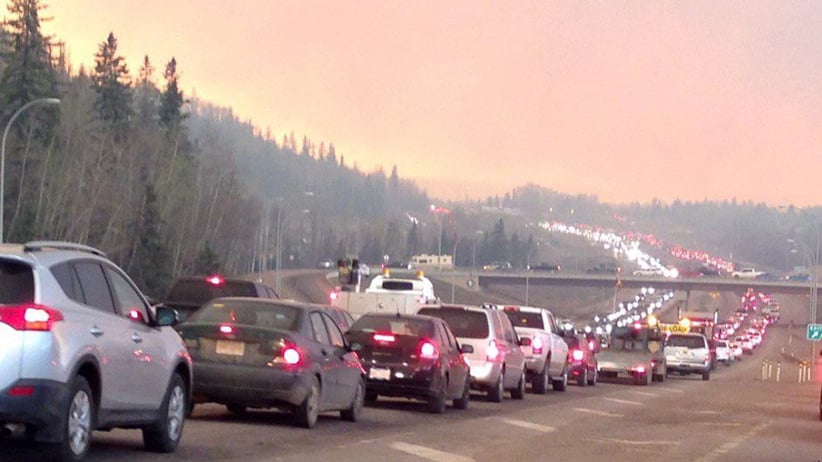 Smoke fills the air as cars line up on a road in Fort McMurray, Alberta on Tuesday May 3, 2016 in this image provide by radio station CAOS91.1. At least half of the city of Fort McMurray in northern Alberta was under an evacuation notice Tuesday as a wildfire whipped by winds engulfed homes and sent ash raining down on residents. (CP)

FORT MCMURRAY, Alta. – The entire population of the Alberta oilsands city of Fort McMurray was under a mandatory evacuation order Tuesday as a raging wildfire destroyed buildings, pushed billowing dark clouds of thick smoke into the air and spit ash down on residents.

An earlier order that had applied to almost 30,000 people, mostly on the city’s south side, was extended to tens of thousands more as hungry flames continued to eat their way into the city.

The wildfire, whipped by unpredictable winds on a day when the temperature reached 32 C, worsened dramatically in a short time and many residents had little notice to flee. Towers of bright-orange flames cut through the clouds and skipped over tinder-dry forest.

Alberta Premier Rachel Notley said the province was doing all it could to ensure everyone’s safety. She said she was looking into the possibility of an airlift for residents with medical issues.

“It is absolutely important that people follow instructions and evacuate as requested.”

Scott Long of Alberta Emergency Management said the flames had burned a number of structures, but he couldn’t say how many.

Carol Christian’s home was in one of the neighbourhoods under the order to leave. She said it was scary as she drove to an evacuation centre with her son and cat.

“When you leave … it’s an overwhelming feeling to think that you’ll never see your house again,” she said, her voice breaking.

“It was absolutely horrifying when we were sitting there in traffic. You look up and then you watch all the trees candle-topping … up the hills where you live and you’re thinking, ‘Oh my God. We got out just in time.”

Work camps associated with oilsands projects well north of the city were being re-purposed to house evacuees.

“We’ve made our work camp available to staff and their families who have been evacuated and need a place to stay,” said Cameron Yost of Shell Canada. 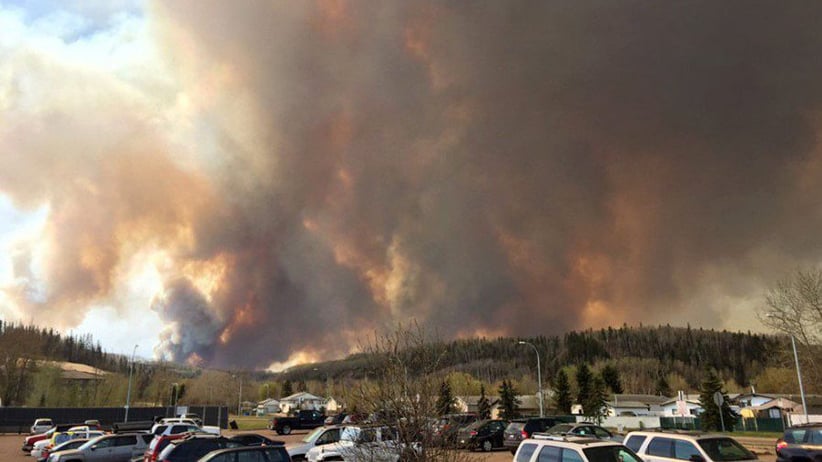 Smoke fills the air near a parking lot in Fort McMurray, Alberta on Tuesday May 3, 2016 in this image provide by radio station CAOS91.1. At least half of the city of Fort McMurray in northern Alberta was under an evacuation notice Tuesday as a wildfire whipped by winds engulfed homes and sent ash raining down on residents. CP

“If you just walk outside, you feel it (ash) falling on you. You see it floating in the air. I can take a broom and brush it off my deck,” said Durocher.

“You can taste it and feel it when you’re walking around. It feels really heavy and you can taste just how ‘woody’ it is in the air.”

A local radio reporter said a trailer park that had been evacuated on Monday was on fire and flames were advancing toward businesses.

“It’s chaos on the roads. People are panicking. It’s gridlock on the roads. Flames are right next to a gas station,” said Carina Van Heerde with radio station KAOS.

Highway 63, the main way into Fort McMurray from the south, was closed after flames jumped the road.

“I’m feeling nervous. It’s a bit of a surreal thing to see it go from nothing to big. It’s very disheartening.”

Pictures posted on Twitter showed long lines of traffic and skies darkened by thick smoke as flames licked the edges of roads.

Fort McMurray is the capital of Alberta’s oilsands region and sits about 435 kilometres northeast of Edmonton.

The Regional Municipality of Wood Buffalo, which includes Fort McMurray, had an overall population of 125,000 in 2015. That included a temporary “shadow” population — many of whom live in work camps — of 43,000.

It’s five years ago this month that wildfires destroyed about one-third of the community of Slave Lake, Alta. More than 500 homes and buildings were damaged at a cost of almost $1 billion.

Crews had seemed to be making progress controlling the Fort McMurray blaze, burning since the weekend, but the situation worsened quickly. 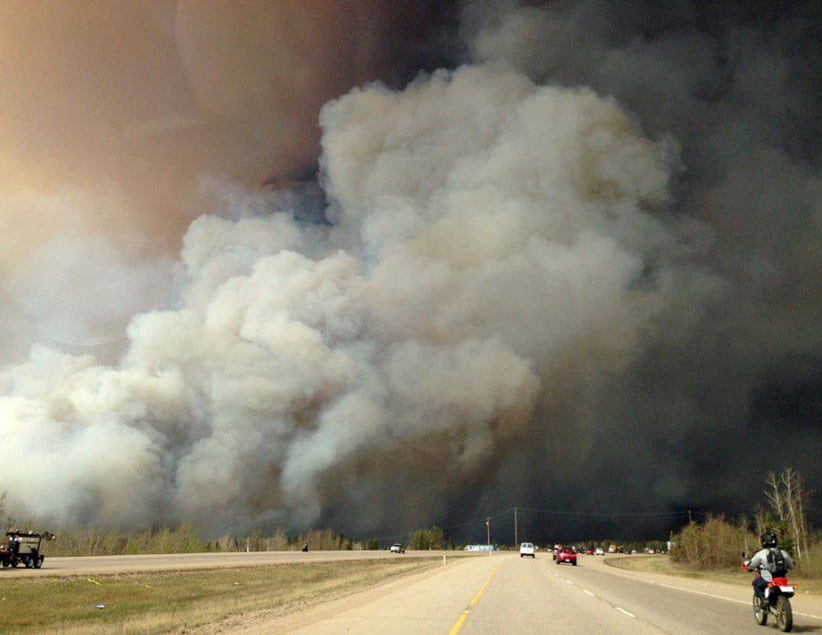 Smoke fills the air as people drive on a road in Fort McMurray, Alberta on Tuesday May 3, 2016 in this image provide by radio station CAOS91.1. At least half of the city of Fort McMurray in northern Alberta was under an evacuation notice Tuesday as a wildfire whipped by winds engulfed homes and sent ash raining down on residents. (CP)

Sandra Hickey, who lives in a neighbourhood under an evacuation order, said the situation changed quite suddenly.

“When I got in the shower earlier today the sky was blue. When I got out, the sky was black,” said Hickey, who had to leave her home. “It was fast. The wind picked up and changed direction.”

Fire officials had already warned earlier in the day that rising temperatures and low humidity could help the fire grow.

“Don’t get into a false sense of security,” fire chief Darby Allen said during a media briefing before things worsened. “We are in for a rough day.”

Crews were busy cutting down a line of unburned trees in the path of the flames to deny the fire fuel. Air tankers were dropping carpets of fire retardant while other aircraft released water.

Unseasonably hot temperatures combined with dry conditions have transformed the boreal forest in much of Alberta into a tinder box. The wildfire threat ranging from very high to extreme.

Forestry spokesman Bruce Mayer said a cold front was expected to come through the region by mid- to late-day Wednesday, which would bring with it shifting winds gusting to 50 km/h. He said to expect “a more intense burning day.”