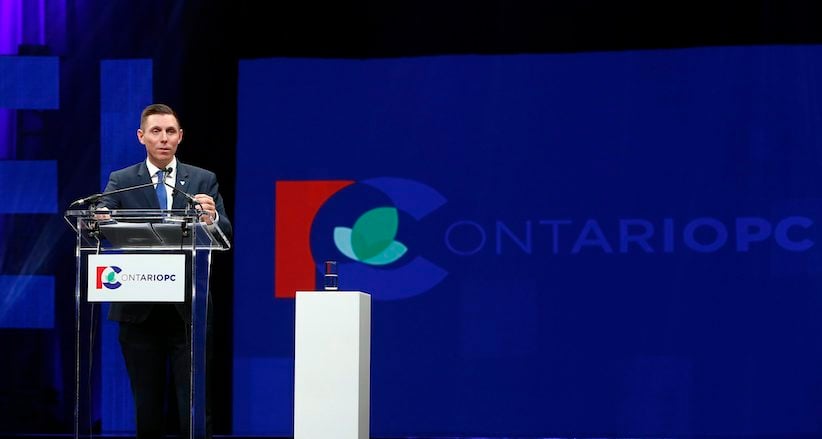 OTTAWA — Ontario’s Progressive Conservatives emerged from a weekend convention confident they will be able to defeat the Liberals in the 2018 election, with a younger and more inclusive party hungry for new ideas.

It was the first convention for new leader Patrick Brown, who announced his first major policy position, saying he supported a price on carbon to fight climate change and calling the Liberals’ cap-and-trade plan a $1.9 billion government cash grab.

Brown, 37, a former federal Conservative MP who won the PC leadership in May 2015, offered few details on how he’d put a price on carbon — British Columbia’s carbon tax “is one example” — and said it must be “revenue neutral” with tax cuts for people and businesses.

“Having polluters pay and having that returned as a dividend to taxpayers in broad-based tax relief is a sensible approach to dealing with the environmental challenges of today,” Brown told The Canadian Press in an interview Sunday.

Some of the nearly 1,800 Tory delegates muttered complaints at the carbon pricing announcement — and one lone cry of “No” — but Brown said there was “practically universal”support“ in the PC caucus on the issue.

Environment and Climate Change Minister Glen Murray took to Twitter Sunday to attack Brown as a climate change “denier” who never raised the issue once in 10-years in the House of Commons.

Brown said he had hoped the Liberals would welcome the Tories’ agreement that something must be done about climate change instead of taking “cheap partisan shots.”

The fact there were so many new PCs at the convention, especially from ethnic communities, and a strong showing of youth delegates, shows they’re well positioned to take advantage of the “huge thirst for change” in Ontario, said Brown.

Brown, who calls himself a pragmatic Progressive Conservative, told the party it must change if it doesn’t want to lose a fifth consecutive election, and said the next campaign platform would come from widespread consultations of members and non-members, not top down from party brass.

“If we have a policy platform that is reflective of the membership, the membership must be a reflection of the province,” said Brown.

Former Toronto Argonauts player and coach Mike ‘Pinball’ Clemons, who amused delegates with a 40-minute motivational speech Saturday, is expected to be a PC candidate in 2018, and will join the leader on a province-wide tour to “listen relentlessly” to voters.

“He would be a great public servant,” said Brown. There are other high profile Ontarians, some not previously engaged in politics, who want to run for the Tories in 2018, said Brown.

“There’s lots of Pinballs out there,” he said. “That is a very encouraging sign for our party.”

The Progressive Conservatives will begin nominating candidates in January, 2017, 18 months ahead of voting day. As part of their rebranding exercise, they also unveiled a new logo, with a red P intertwined with a blue C, and a green leaf in the middle.

Several Tory MPPs who supported Christine Elliott in the leadership race, including Todd Smith and Michael Harris, said they were impressed with Brown’s performance during the convention, especially his Saturday night speech.

Brown called claims of infighting in the PC caucus between two eastern Ontario MPPs “exaggerated,” and said Jack MacLaren was not helping another would-be candidate challenge caucus mate Lisa MacLeod for her re-nomination in 2018.

“There really is nothing there,” he insisted. “Jack said very clearly that he is publicly supporting his caucus colleagues.”