Paul Martin: Canadians not racist, but aboriginal issue invisible to many

Former prime minister Paul Martin: 'It is my belief if we speak about [Indigenous issues] ... more and more Canadians are becoming aware of it' 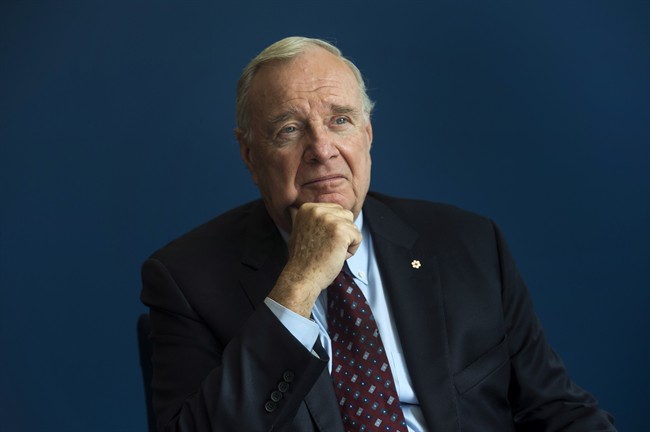 Former prime minister Paul Martin poses for a portrait following an interview with The Canadian Press in Ottawa, Thursday May 12, 2016. (Adrian Wyld/CP)

OTTAWA – Canadians are not racist, but the country’s indigenous problem remains out of sight and mind to many, says former Liberal prime minister Paul Martin.

In an interview with The Canadian Press on Thursday, Martin stressed that when more Canadians grasp the challenges playing out in indigenous communities, they will realize it is totally unacceptable to discriminate against them.

“I do not believe Canadians are racist,” he said. “I do believe, unfortunately, that the whole issue that we are talking about is invisible to so many Canadians …

“We are a generous people when we rise to an occasion of which we are aware. Unfortunately, the invisibility of the aboriginal issue in this country is something that has been locked in by history, but it is my belief if we speak about … more and more Canadians are becoming aware of it.”

From the archives: In Winnipeg, Canada’s racism problem is at its worst

He also said he supports Cindy Blackstock, who spent nine years fighting the government over aboriginal policy and won a landmark ruling from the Canadian Human Rights Tribunal in January.

“It is first money, it is second recognizing that we have to work with the First Nations,” he said.

“There are tremendous child welfare advocates out there, people who are very knowledgeable, people like Cindy Blackstock and what the government has to do is to work with them … for cultural reasons, traditional reasons, and just simply that’s where the expertise lies.”

Working together could produce results quickly, he added.

“We won’t do it if we are turning our back on them,” he said. “Cindy Blackstock is right.”

Martin’s voice lends credibility to the notion that First Nations children are worth the money and can succeed, given the proper opportunity, Blackstock said.

She noted, however, the current government’s commitment of $71 million for the issue in this year’s budget falls far short of what is required to close the gap.

“(It’s) going to mean more investment from the federal government for equitable child welfare services and more flexibility in the way that the funds are rolled out, so it can actually meet the needs of children,” she said.

“Right now, the funding is totally not based on the needs of kids and that needs to change.”

Martin said his Liberal government had child welfare services on reserves in its sights when it drafted the Kelowna Accord — the 2005 funding agreement with aboriginal leaders and the provinces that was abandoned by Stephen Harper’s Conservatives.

He said the former government’s refusal to honour the agreement still robs him of sleep.

“It starting keeping me up at night at the day the Conservatives did it,” Martin said.

“It made no sense in the world and has it bugged me for 10 years? Absolutely.

“How can you go along and say to a six-year-old going into Grade 1 that you’re not going to get the same type of education as a six-year-old kid who is living 10 miles from you. It is just wrong to do that and … not only is it wrong morally but it is economic lunacy.”