Penny Oleksiak on adjusting to life as an Olympic role model

After Oleksiak's record-setting success at the 2016 Olympics in Rio, the 17-year-old has become the face of Canadian swimming 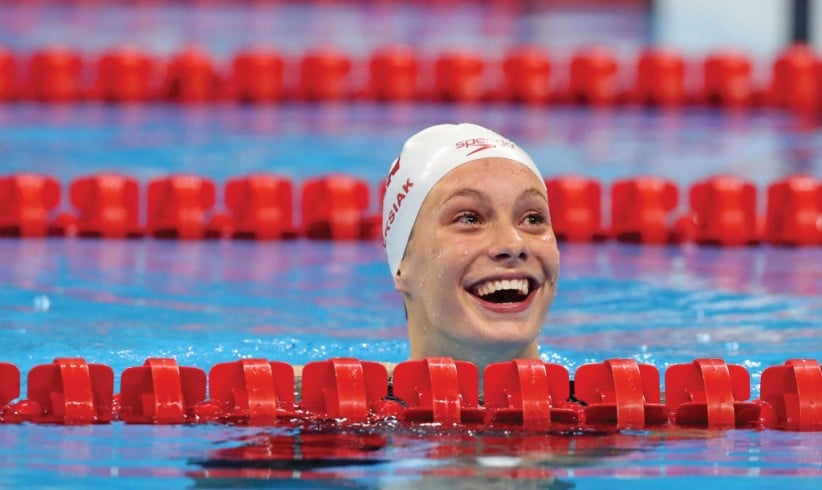 What a difference a year makes.

Last summer Penny Oleksiak was just like any other Canadian amateur athlete. Now she’s the face of Canadian swimming.

The 17-year-old Toronto native captured the hearts of Canadians with her record-setting success at the 2016 Olympics in Rio. Oleksiak became the first Canadian to win four medals at a summer games, Canada’s youngest-ever Olympic champion and she was selected to carry the Canadian flag into the closing ceremony.

Her success at the Olympics kicked off a year that could best be described as a blur.

MORE: The making of Penny Oleksiak: Our best-ever Summer Olympian

Between meeting Chance the Rapper and visiting Australia, while trying to keep a normal teenage life in between six hours a day of training, Oleksiak is living life in the fast lane.

The best metric of her ascension is Instagram followers. Before Rio she had a couple thousand followers but that number is now just under 90,000. With all that attention, you might think she would be self-conscious about what she posts but that’s not the case.

“My mom actually pays attention more than I do,” Oleksiak says. “I’ll post something and she’ll be like ‘Only 14,000 likes.’”

When asked if she bothers mining through all of that online traffic, Oleksiak bluntly responds, “Of course I do. What teenager doesn’t read their mentions?”

All of the attention Oleksiak’s gained from being so dominant and yet so charmingly down to earth is why the next phase of her evolution is of heavy interest to potential sponsors.

Oleksiak recently landed a four-year partnership with the performance and lifestyle footwear brand Asics. This marking her first major deal, she was excited about partnering with a brand that has pivoted in recent years to appeal to a younger consumer. Don’t be surprised if you see a collection curated and designed by Oleksiak in the future.

I caught up with Oleksiak at the launch of her partnership with Asics to pick her brain about what the whirlwind of the last year has been like.

Sportsnet: What’s the biggest difference in your life this summer in relation to last summer?
Penny Oleksiak: The biggest difference is the opportunities I’ve gotten. I know last year people wouldn’t be like “Hey come to the Chance concert or hey let’s go to the Drake concert.” Last year I was buying shoes at the mall not modelling them for a campaign that will be put up in malls.

You’re already a fashion influencer off of your social media. How did you decide what apparel brand you wanted to align with?
I’m super excited to be a part of [Asics]. They’re emerging so quickly right now. You see everyone wearing their shoes even though is kinda subtle. I’ve seen them on Jay-Z and the OVO crew. I feel privileged to be a part of that.

What’s your thought process when deciding what to wear?
It’s really hard to find shoes that you can wear when you’re hanging out with your friends and then go to training in. Most of my work is not in the pool. I’m doing a lot of agility, strength work, cycling, yoga. I’m happy to have shoes I know I’m always going to be my best in.

How many of your friends have asked you to hook them up?
So many! They are all like “when are you going to get me some shoes?” I’ve shown my friends some of the stuff coming up and they are really excited about it.

Are there things that aren’t great about the added attention?
For sure. There are definitely times I don’t want that much attention. When I’m just hanging out with my friends it’s weird to have people come up to you and be like “hey can I get photos of you?” Once one person does it then more people come up and my friends are like “ok, can we go?”

How does it feel to be a role model for young girls?
It’s crazy for me because there are so many people that I still look up to. It’s weird to think that kids look up to me because I’m just trying to follow someone else and they are just trying to follow me. It’s nice to know I have that ability to empower people and change their minds but it’s weird to think kids are looking up to me.

Who do you look up to?
There are so many people I look up to. I definitely look up to all the girls that I train with every day and my parents. I’m just in a really good place in my life.

What was your phone like after you won your first medal?
My phone in Rio actually broke a few times because it just kept getting way too many notifications and way too many messages. Before my first race I totally forgot to turn off notifications for everything. So, I got every notification on every app. It was crazy.

So winning an Olympic medal broke your phone?
Yeah it definitely did. Warning to the Winter athletes.

Has the success changed your approach to the sport?
I’m not sure my mindset is too different. I am just more confident in what I can do. Last year, going into my gold medal race I was like “ughh, I think I’m going to come like eighth. I don’t know how well I can do.” Now I have the confidence of “why can’t I win again?” So, I know I can go in there and race my fastest.

What are you most looking forward to after the season?
Concerts. Ovofest, Veld maybe. Probably Boots and Hearts with one of my friends and going to Africa with my family.

After a long season you are choosing to go across the world and do philanthropic work in Africa. Why?
I just think it’s really important to give back and WE is giving me the opportunity to go to Africa with my family. I’m just really excited to be able to go and help out there. We all should do whatever we can do.

At We Day you met one of Africa’s greatest sons, Masai Ujiri. What was that conversation like?
It was super cool. He was super chill and I really liked talking to him. He was like “if you ever want to come to a Raptors game just let me know.” I was like “I’ll come to every Raptors game.” I love the Raptors.

After you won the Lou Marsh award Prime Minister Trudeau tweeted you to congratulate you. What’s it like to have the PM in your mentions?
It’s so cool. I’ve met him a few times now and every time I met him he’s always like “Oh, hey Penny. How are you doing?” and I’m like this is so weird. Just because he’s such a big role model and such an important figure in Canada and around the world. So, to have him come up to me and have a conversation like we’re family friends, it’s weird.

Thank you Penny Oleksiak for being our flag bearer this evening! #ClosingCeremony #Rio2016 #TeamCanada pic.twitter.com/WgqJ3XOIMf

I don’t think you’ll have an issue getting closer seats this year.
I hope not. That would be awesome. (Laughs)

OVOPenny aka @typicalpen we are so proud of you!!!! Can’t wait to see you when you are back from Rio at a show!