Perry Bellegarde: 'If we win, Canada will win' 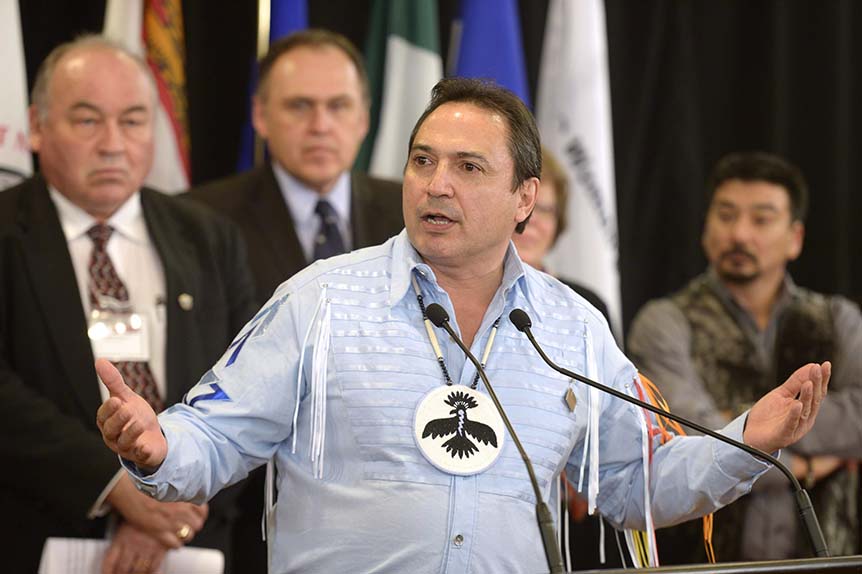 Perry Bellegarde was elected Grand Chief of the Assembly of First Nations last December. Bellegarde is from the Little Black Bear First Nation, in Treaty 4 territory, in southeastern Saskatchewan. He spoke to Maclean’s from Winnipeg, where he was attending the annual Indigenous Music Awards.

Q: It seems there has been no attention paid to Indigenous issues in this election. Is that your perception?

A: I have noticed that for sure. Part of our job is to ensure our priorities get front and centre attention. According to the UN Human Development Index, Canada ranks six in the world. If you applied the same indices to First Nations, we would rank 63 in the world. There’s a high cost to maintaining that gap. When we look around every day we see it: Life expectancy for our people is five to seven years less than for a non-Indigenous person. Half our children live in poverty; 120 of our communities are under boil water advisories. Our youth suicide rate is five to seven times higher than for youth in Canada as a whole. We have 1,500 missing Indigenous women and girls. That violence needs to be addressed, and violence in communities needs to be addressed. If we win, Canada as a country will win. It’s all about closing the gap. If Canada started doing these things as an investment, it would be an economic stimulus plan for Canada. If five years ago we had started investing in housing education and training we could add $400 billion to Canada’s GDP; and you’ll save $115 billion in social spending by 2026.

Q: Why do you think there has there been a lack of focus on these issues?

A: In Canada, we are 4.3 per cent of the population. We get overlooked because we’re not large in numbers. Historically, a lot of First Nations people don’t vote. Trying to form government, you’re not concerned about First Nations issues because they don’t tend to help you win. We’re trying to mobilize the vote. We can influence 51 ridings. We can make the difference between a minority and a majority Parliament. Our people matter. Our priorities matter. Our votes matter.

Related: Our in-depth primer on truth and reconciliation, one of the election’s big issues

Q: You got a lot of press last week when you said you were not planning to cast a ballot in the federal election. That decision was quickly reversed. You will be voting on Oct. 19. Can you tell me a bit about your initial decision not to vote?

Q: So what changed?

A: I listened to my elders, to chiefs and youth across Canada. We’re trying to mobilize the vote, to tell our people that individual votes matter, that our vote matters. That if we can mobilize our vote, we can influence ridings.

Q: Will you endorse any one party?

A: I’m not telling people who to vote for. We are saying get out and vote—make informed choices and decisions.

Q: Then what will parties have to do to win your vote, and the vote of First Nations people?

A: Whichever party starts announcing policies and priorities that help address the gap, our people will start gravitating toward. I will remain non-partisan because I will have to work with whoever gets elected.

Q: Given the current climate—the hurtful comments about First Nations people by some Conservative candidates—do you see many Indigenous people voting Conservative?

Q: Who in particular reached out to you after you announced your decision not to vote?

A: I heard from a number of chiefs. I follow our traditional ways, and I always seek advice and guidance from my Sundance chiefs and ceremonial leaders from back home. I heard from my colleagues, from the regional chiefs.

Q: Which chiefs did you hear from?

A: I talked to a number of them. I also spoke to the Elders and ceremonial people I grew up with. I wanted to make sure I have their direction and their guidance.

Q: Chief Isadore Day, Regional Chief for Ontario, has announced a fundraising campaign to launch an inquiry into missing and murdered Indigenous women and girls. Will you support this inquiry?

A: Of course. And once Oct. 19 comes, we’ll see who we’re dealing with, and whether they are willing to hold an inquiry. The Conservatives have said they do not support a national inquiry—that they want to see action. What action are they doing? We haven’t seen any action on their part. There’s been no investment in housing, in daycare, in wellness centres, in transportation—in areas that can help bring real change. But we can’t just have an inquiry. There needs to be an action plan. And there needs to be strong education and awareness by Canada in general. Right now, there is a sense that First Nations women and girls aren’t important. They don’t matter. They are expendable. Indigenous women are human beings and they matter. We all need to understand that.

Related: ‘It Could Have Been Me’: Harrowing stories of Indigenous women who could’ve been missing or murdered

Q: Will you be voting in Ottawa or Saskatchewan?

A: Good question. I’ve moved to Ottawa. I will be voting in that territory.

A: Paul Dewar is my current MP. Catherine McKenna is running against him for the Liberals. I’m not sure who from the Conservatives is running in the riding. I’d like to sit down with all candidates and make a more informed choice.

Q: Once you’ve better informed yourself, will you announce who you intend to vote for?

A: No. That’s a very personal choice I can at least keep that between me and the Creator.

Q: Have you sat down with the Prime Minister?

A: We sat down once for 45 minutes after I was first elected last December. We continue to reach out. We are trying to build a relationship that will bring positive change.

Q: What did you make of him?

A: He’s an economist, so I tried to appeal to his economic side, to build the business case, to explain the financial cost of maintaining the status quo.

Q: How did you find him?

A: He was open, but not committal to any ideas. Respectful. But not really engaging. Professional.

Q: What should government consider its most crucial priority with regards to Indigenous people?

A: Closing the gap is the most important thing. If we can close that gap, we can build a greater government. When we do that, everyone in Canada wins. All political parties are starting to realize the current government’s approach is holding everyone back—it’s unnecessarily adversarial. I’d like all Canadians to know and understand that.