Perry Bellegarde makes his pitch for a developed, respectful Canada 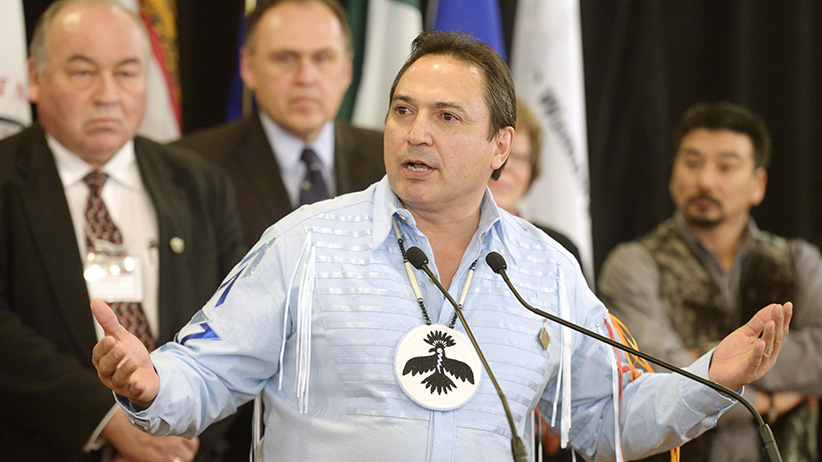 Sitting in front of a crowded room of top policy-makers and corporate CEOs on Wednesday, Assembly of First Nations National Chief Perry Bellegarde brought a clear message: “Close the gap.”

Sandwiched somewhere between an interview with federal Innovation Minister Navdeep Bains and a keynote speech by the federal government’s top economic adviser, Dominic Barton, Bellegarde acted as the Indigenous voice at the Public Policy Forum’s Growth Summit in downtown Ottawa.

In his interview, Bellegarde stressed the difference between quality of life for non-Indigenous people and Indigenous people—a population that’s young and growing. As Baby Boomers approach retirement age, Bellegarde touted the potential for Canada to tap into the “human capital” on and off reserve.

“As First Nations people, we want to see development, no question,” he said. But in doing that, the federal government, provincial governments, industry leaders and Indigenous peoples need to find common ground. “Before you try to build anything, build a respectful relationship with Indigenous peoples.”

These relationships could help address the grim socioeconomic reality Indigenous people face in Canada. In 2015, Canada ranked ninth in the world for quality of life, according to the United Nations Human Development Index. If you apply those same principles to Canada’s Indigenous community, Bellegarde said that ranking drops to 63rd. “This gap represents everything we talk about: it represents the 1,200 missing and murdered Indigenous women and girls; it represents the high youth suicide rate, the 132 boil-water advisories; it represents the cap on post-secondary funding, the disproportionate number of people in jails.”

The federal government set aside $8.4 billion over five years in this year’s budget to address some of those issues, but Bellegarde said they have yet to see any of that money, and impatience in communities across Canada is “starting to brew”—as is the impatience for Prime Minister Justin Trudeau to act on all five promises he made at AFN’s general assembly last year. Those included an inquiry into missing and murdered Indigenous women, implementing the Truth and Reconciliation Commission’s 94 recommendations, removing the two per cent funding cap, reviewing federal laws, and making significant investments in Indigenous education.

Of that $8.4 billion, $2.6 billion will be invested in primary and secondary schooling on reserves. But half of Canada’s First Nations population lives off-reserve, and Bellegarde said change has to happen there as well, starting with the curriculum.

Other news from the Growth Summit: Bill Morneau takes on Donald Trump

Education among First Nations youth is sorely behind. A report released in early 2016 by the C.D. Howe Institute found that only 40 per cent of First Nations aged 20 to 24 living on reserves finished high school, compared to 70 per cent off reserve. Ninety per cent of non-Aboriginal young adults have a high school diploma.

“We’re still here,” Bellegarde said. “But we don’t want to be in 63rd anymore. We’ve got to close this gap, which really is in the best interest of Canada.”