The National Chief of the Assembly of First Nations on changing minds, his mother's sacred teachings, and building a fairer Canada 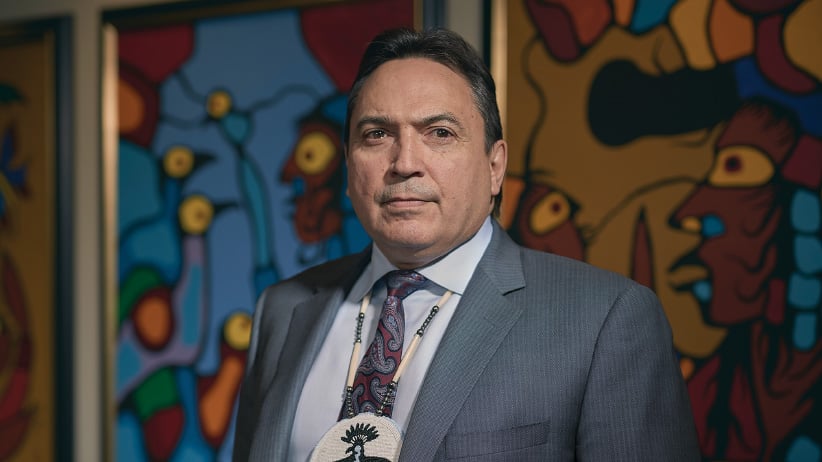 Q: Tell me about your parents.

A: My mom was very strong. My dad died when I was 17. He had heart and other problems.

Q: He was also a residential school survivor.

A: Oh yeah. He was a good father, lots of love. But he was affected by it. When he died, mom picked up the reins and raised six boys all on her own.

Q: What was your mom like with you boys?

A: My mom could have been a CEO of any company. She was very organized, very strict. She showed us the importance of living a healthy lifestyle. There was no alcohol allowed in the house. Three of my brothers are retired RCMP officers. I’ve got another brother working in child counselling. My mom is 80 years old now; she gave us a good, strong foundation and start.

Q: What is the most valuable lesson you learned from her?

A: The seven sacred teachings: love, respect, courage, honesty, wisdom, humility, truth. These are the seven virtues that lead to a full and healthy life. My mom espoused those teachings. That’s how she lived her life. That’s how she raised us.

Q: But you didn’t grow up around ceremony.

A: Growing up, the major institutions were school and church. We were taught our culture was no good. We didn’t have sundances. The last ones were in the 1940s and ’50s. They’re starting to come back now. Each reserve is starting to have a Big Lodge and a sundance ceremony. That’s what’s going to rebuild our people.

Q: When were you first exposed to ceremony?

A: When I was 19, 20, I started meeting with elders. They really had an impact. You listen to them. There’s no interruption, no questions.

Q: What was it like living on reserve back then?

A: We hunted; we fished; we trapped. We lived off the land. If we didn’t hunt, we didn’t eat. In summer, we hauled water from the slough. In winter, we hauled in snow to heat for water. We set net on the lake.

Q: Where did you go to school?

Q: How did you get to Goodeve?

Q: What was it like to go to school in an all-white community?

A: I played a lot of hockey, a lot of ball. Because of that I fit in—everyone wanted me on their team. The guys knew I was a hunter, and they were farmers. They just accepted that. I have lifelong friends from Goodeve. I experienced racism in different settings: I was followed in stores, in cars.

Q: How did those early experiences of prejudice not embitter you?

A: The way you experience racism depends on how you deal with it. My memories of Goodeve are good ones.

Q: Do you think those experiences shaped you?

A: Being the only Indian in class, I had to be able to stand up and defend myself and debate the others when they tried to say: “You Indians get everything free.” People have stereotypes of Indigenous people. I learned to challenge in a respectful way.

A: You want to change a mind, there’s no better way than a dialogue over coffee.

Q: You’ve been bringing people onside since you were a kid.

A: All my life, I’ve been making allies, building bridges. I still speak some Ukrainian—what a beautiful language and culture. “Je parle aussi français, mon amie [I also speak French, my friend]. Nista miyosin nipikiskwaywin [mine is also a beautiful language].”

Q: I’m Prairie-raised. It’s tragic that I cannot respond to you in Cree, that I wasn’t taught to at least say hello and to express thanks in Cree and Ojibway.

A: Indigenous languages are Canada’s national treasures. They are our identity. We simply have to put greater effort into rejuvenating and revitalizing them. It is key to moving forward.

Q: You got your political start very early.

A: I was 26. Right out of university. I ran for band council at Little Black Bear. Then I became chief there, then chief of Saskatchewan’s Federation of Sovereign Indigenous Nations. In December 2014, I ran for national chief of the AFN.

Q: What did you study?

A: I was the first Treaty Indian to earn a business degree from the University of Regina.

Q: Why did you decide to enter politics?

A: The elders and certain chiefs came to me and said, “It’s time to come help us.” In Cree, an oskâpêwis is a servant or a helper, someone who hauls in rocks for sweats, or pipes or medicines. I equate that to leadership. You’re a servant or helper of people.

Q: After the fall of South Africa’s apartheid system, Nelson Mandela, the country’s first president said: “If the pain has often been unbearable and the revelations shocking to all of us, it is because they indeed bring us the beginnings of a common understanding of what happened, and a steady restoration of the nation’s humanity.” Is this true of us too?

A: It certainly is. Now is the time to take stock of a painful part of our history. Only then can we move past it. Anything less would render generations of courageous struggle and soul-searching a truly lost cause.

Q: Only then can the healing come.

A: A lot of Canadians don’t seem to want to hear it. All I can say to them is: try to listen. Open your heart, your mind. The Indian Act and residential schools did a number on us, breaking down Indigenous people, then families, communities, nations. We can learn so much from each other. There is so much to be hopeful for.

Q: Learning is crucial. Coming back to language and to ceremony is crucial. What’s the next step?

A: Returning to our own system of government. We are a nation within a nation. 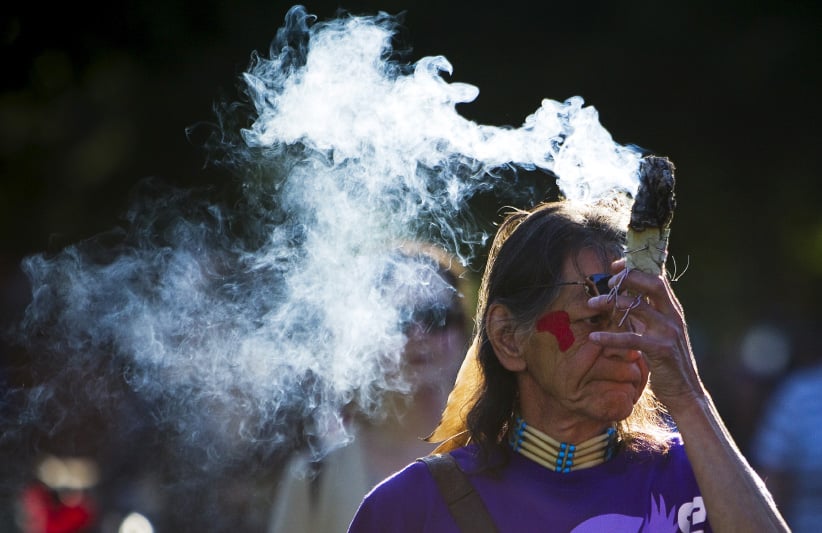 Q: A lot of non-Indigenous Canadians forget they are also treaty people. What does it mean to be a treaty person?

A: That we coexist in peace and with mutual respect. That’s at the core of these treaties. They intended for us to mutually benefit from sharing the land and its resources. To us, this contract and agreement is a sacred covenant whose signing was witnessed by your God (we call him the Creator) and by your angels (we call them ancestors). You can’t break that. We didn’t just sign it one day. It took months to prepare, to plan, to seek guidance.

Q: They were created to be everlasting.

A: “As long as the sun shines, the rivers flow, the grass grows.” Forever. Treaty medallions depict a European man shaking hands with an Indigenous person. Beneath them lies a buried hatchet. The clasped hands and buried hatchet are meant to symbolize eternal peace and friendship.

Q: What myth about Canada most irks you?

A: That Canada was founded by two nations: the English and the French. What about the Mi’kmaq, who opened their doors, who shared their food, their knowledge? What about the military alliances our people formed with European settlers? We are allies of the Crown.

Q: Without the help of the Sioux, who fed and housed my great-grandfather through his entire first winter in North America, he would not have survived. There were many like him, from Ireland, Britain, who came unprepared for these harsh lands.

A: And that part is never celebrated: the medicines, the knowledge, the food, the lands—all that we shared openly.

Q: Do we need to begin recognizing in meaningful ways the Indigenous role in the creation of this country?

A: We do. We made huge contributions to this country. The biggest is in sharing the land and resources. People need to see that, understand that. Indigenous people should be viewed as the founding peoples of this land.

Q: How do we change that?

A: Education and awareness. Education will lead to understanding; understanding will lead to action. Education and understanding are going to be key to moving us forward. That’s why I take every opportunity I can to try to educate Canadian people on the impact of intergenerational trauma. To tell them how, until 1951, we weren’t allowed to leave the reserve without a permit. That it was illegal for a lawyer to give us advice. It was illegal for us to sell our wood, our cattle, without a permit. I want the next generation to understand we have endured, we have persevered and we are getting stronger.

Q: To a lot of people, Canada 150 feels regressive and potentially harmful, particularly to those nations who have called this land home for more than 12,000 years.

A: We should be adding two more zeroes on there!

A: We’re not celebrating this; we’re marking it. The distinction is important to us. Some will celebrate, some won’t. Some will say: “Why should we celebrate the birth of colonialism, of oppression, of cultural genocide?” It’s 2017. In spite of the genocide we faced via the residential school system, and all we have endured from colonialism and control, from 1876 to this day, we’re still here. We need to show the country and the world that we are still here.

A: That we focus on bringing back Indigenous languages, ceremonies, cultures, traditions—all that was lost over the past 150. This is how we’ll generate hope—for all Canadian people.

Q: Can you describe the moment you felt genuinely hopeful that a better Canada awaits?

A: I was in North Bay, [Ont.,] a few years ago. I walked into a class in a Catholic school. There were 16 students: eight of them were First Nations kids, the other eight were non-First Nations students. They drummed us in—every one of them. Then we entered, and they smudged us—this is a Catholic school! They used sage and cedar and sweetgrass to cleanse the air and clear the room of negative energy. Then, one by one, they introduced themselves in Ojibway. It was such a powerful moment of acceptance and validation: Ojibway was treated with the same degree of importance as French. Smudging was equally important to a Bible teaching.

A: The children are going to show us the way.

MORE ABOUT THE ASSEMBLY OF FIRST NATIONS: