Judge rules in much-watched art case, calling it a case of mistaken identity 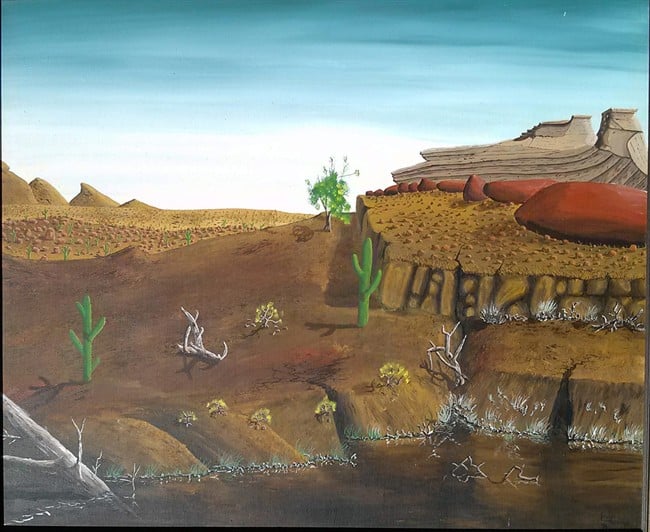 This undated photo provided by Bartlow Gallery, Ltd. shows a painting of a landscape that was once valued at more than $10 million. A federal judge in Chicago is set to issue a verdict in a peculiar civil trial over a celebrated Scottish-born artist’s insistence that he did not paint the landscape work. The painting’s owner maintains that the painting of the desert landscape, which he paid $100 for in the ’70s, is by Scottish-born Peter Doig. (Bartlow Gallery, Ltd. via AP)

A painting at the centre of a strange multimillion-dollar civil lawsuit filed by a former Canadian correctional officer who owns the canvas was definitely not the work of famed artist Peter Doig, a Chicago judge ruled Tuesday.

In his decision, U.S. District Judge Gary Feinerman said the evidence showed that Doig, whose paintings have sold for more than $20 million, was not in a prison in Thunder Bay, Ont., in 1976 when the desert landscape was painted and sold to the guard.

“Peter Doig could not have been the author of the work,” Feinerman said in his decision, calling it a case of mistaken identity.

The unprecedented battle, closely watched by the art world, involved a claim by Robert (Bob) Fletcher, of Sault Ste. Marie, Ont., who argued that Doig painted the canvas, once valued at more than $10 million.

Doig, who lived in Toronto decades ago, disavowed the work, arguing the acrylic landscape was by a Peter Doige, a man who once spent time locked up in Thunder Bay for a drug offence. Doig claimed he had never been in the northern Ontario city and only began painting on canvas in 1979.

Among other things, Feinerman noted photos from a high school yearbook proved Doig, now 57, was at a Toronto high school and not in a prison in Thunder Bay where Fletcher worked.

Doig “absolutely did not paint” the impugned work, which was in fact by Doige, Feinerman found.

The suit had alleged Doig’s disavowal of the canvas — ostensibly to hide his criminal past — had potentially cost Fletcher millions, because auctioneers refused to put the painting up for sale.

“I have rarely seen such a flagrant example of unethical conduct in the U.S. courts — nor a case that inflicted such needless burdens on a defendant,” Doig’s lawyer, Matthew Dontzin, said in a statement after the verdict.

“Artists should be grateful to Peter for having the ethical and financial fortitude to fight tirelessly to ensure that justice prevailed.”

MORE: Peter Doig, the man who paints Canada from Trinidad

Fletcher could not immediately be reached for comment Tuesday.

However, in a recent interview, Fletcher, 62, told The Canadian Press he was pursuing the claim despite the risk of having to pay hefty court costs to find out if the artwork was Doig’s so he could sell it.

“We are so convinced that we have the right person that we’re going to go ahead with this,” Fletcher said.

The origins of the dispute date back 40 years, when Fletcher worked at the Thunder Bay Correctional Centre and also attended classes at Lakehead University. At the school, he met a teenager named Peter Doige, who ended up in jail for possession of LSD and, during art classes at the institution, painted the disputed work.

The 86-centimetre by 105-centimetre canvas depicts a desert scene with a pond. It is signed “Pete Doige 76.” As a parole officer, Fletcher bought the painting for $100 as a way of helping Doige.

Five years ago, Fletcher’s friend noticed the canvas and said it was done by Doig. That spurred Fletcher to do some digging, which, according to his claim, turned up “uncanny convergences” between Doig and Doige: Both were born in the 1950s in Scotland; Doig’s family immigrated to Canada when he was a child; and Doig has admitted to having dabbled in LSD as a teen.

Fletcher, who admitted that pursuing the lawsuit was a gamble, and Chicago-based Bartlow Gallery alleged Doig and his agents had “wilfully and wrongfully interfered” with their efforts to sell the painting, but Doig called the lawsuit a scam.

The artist, who splits his time between Trinidad and London, denied ever being in Thunder Bay, or in prison.

Marilyn Bovard, of Hinton, Alta., said in court filings that she believed her brother, who died in Edmonton in February 2012, was the painter and the scene appeared to be from around an area in Arizona where their mother lived.