Regrets? Perhaps a few — to judge by the photo file 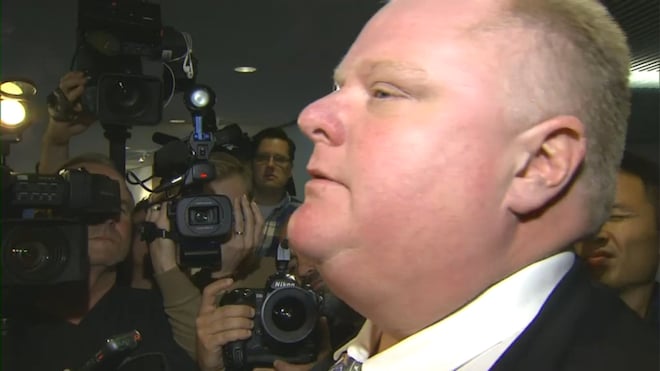 Six words after six months of denial: “Yes, I have smoked crack cocaine.”

Toronto Mayor Rob Ford said as much to reporters at city hall on Tuesday morning. “But am I an addict? No.”

Well, whatever. Much talk in Toronto of a city’s shame, its reputation and so on. As the story continues to develop, a quick look back at the Ford photo file:

Toronto Mayor Rob Ford is shown in a video still first published on the U.S. website Gawker on May 16, 2013. The website reported on a video its editor viewed that is alleged to show Ford smoking crack cocaine. Ford called the allegation ridiculous. (Gawker/CP)

Weight challenge image: No thanks: Ford ignored offers of vegan food from PETA during his weight-loss publicity stunt in 2012. (Pawel Dwulit/Toronto Star via Getty)

Rob Ford has a phone conversation while putting magnets on cars outside the Church on the Queensway on May 14, 2013. (Daniel Dale/Toronto Star/Getty)

Ford hot-rodding it down the Gardiner: Ford was photographed reading while driving on Toronto’s Gardiner Expressway; he eschews a driver.