The unlearned lessons of Lac-Mégantic

Just months after the horrific train crash in Quebec, the rail industry is ramping up to carry even more oil

Kerrobert, Sask., is perfectly situated to be a railway hub. Its central midwestern location makes it suited for delivery westbound, eastbound and down to the United States. That’s one of the reasons why, in early August, Torq Transloading Inc. pegged the small town of 1,061 people for its new $100-million rail hub for shipping oil. A week later, Torq also revealed plans to expand the Unity Rail Terminal in Unity, Sask., less than an hour’s drive north from Kerrobert. That will allow it to handle trains hauling 120 tank cars of crude—a three-fold increase from what the terminal currently accommodates. Meanwhile, a short drive across the border in Alberta, Gibson Energy has announced plans for a major terminal in the town of Hardisty, which would be able to ship 140,000 barrels of crude by rail every day.

It’s been less than two months since 72 tank cars filled with crude derailed and exploded in Lac-Mégantic, Que., killing 47 people, but of all the scenarios Canadians may have expected in the aftermath, a massive expansion in the shipment of oil by rail probably wasn’t one of them. Yet even as officials and experts debate the practice, including in a wide-ranging Senate report released last week that called for the industry to improve its safety, oil transportation by rail shows no signs of waning.

Not surprisingly, many aren’t thrilled with this latest round of expansion. “We think it’s safer to ship oil by pipeline than rail, and I think the Quebec accident underlines that reality,” says Peter Prebble, a policy director for the Saskatchewan Environmental Society.

On the ground in Kerrobert and other small oil communities, however, people take a far more nuanced view. Erhard Poggemiller, the mayor of Kerrobert, says his community is keenly aware of the safety issues, what with three pipelines running right by their town for decades and oil trains regularly passing through. “I think everyone had a major wake-up call [regarding Lac-Mégantic], including our community,” he says. But the new rail hub will be an obvious boon to the town. “We feel very confident that the safety issues that needed to be addressed have been and are being addressed.” If anything, he is more concerned with how to maintain local roads in the face of increased traffic. “This was a no-brainer for us because we know what we’re getting into.”

Still, as last week’s Senate report made clear, there are steps that could be taken to boost safety. For one, the committee called on the government to force railway companies to replace the DOT-111 (or in Canada CTC-111a) tank cars that are commonly used to carry oil, but which critics say are unsafe for carrying hazardous goods. Those were the types of tank cars that exploded in Lac-Mégantic, and the Transportation Safety Board documented their shortcomings as far back as 1994. “We can’t continue to use railcars that may not meet the standard continually and hope that we’re going to have good safety,” says Sen. Richard Neufeld, who chairs the committee. However, approximately 240,000 of these cars are still in use today and the industry has repeatedly said the cost of retrofitting them, estimated at more than $1 billion, makes it unrealistic.

A more affordable recommendation from the committee was for rail companies to boost their liability coverage. That could help avoid a repeat of the situation in Quebec where Montreal, Maine & Atlantic Railway had insufficient insurance to cover the damage to Lac-Mégantic. The company has filed for bankruptcy protection.

While Calgary-based Torq is rushing to expand its oil transport hubs, the company says it is not responsible for the types of cars its rail customers use. “As far as safety goes, the only thing I can control is the way I load the railcar—controlling the vapours, sealing the car properly,” says Torq CEO Jarrett Zielinski. “We believe putting heavy oil into a tank car may provide safety benefits equal to or better than pipelines.”

With continued high demand for crude, and railways seen as an affordable way to transport it, the recent wave of expansion is likely to continue, despite loud opposition, says Manish Verma of McMaster University, an expert in the transportation of dangerous goods. “Most people would be very shocked as to how these [new rail hubs] are being allowed to go ahead,” he says. “The harsh reality is everything is dictated by cost economics.”

The other reality is that as long as there’s a need to move oil from one place to another, as Sen. Grant Mitchell, deputy chair of the committee told reporters, there can be no such thing as “zero risk.” 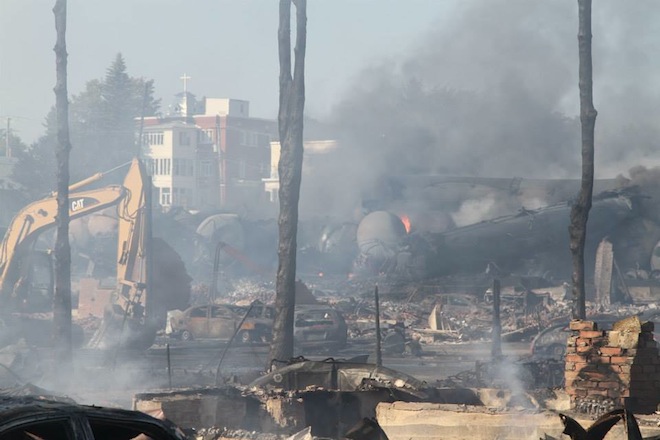 A photo from inside the disaster zone in Lac-Mégantic, Que. Released by the Quebec provincial police on July 9, 2013. (Sûreté Du Québec)