Peladeau's power and money propelled him to the top job. Now the real challenge of guiding the official opposition begins. 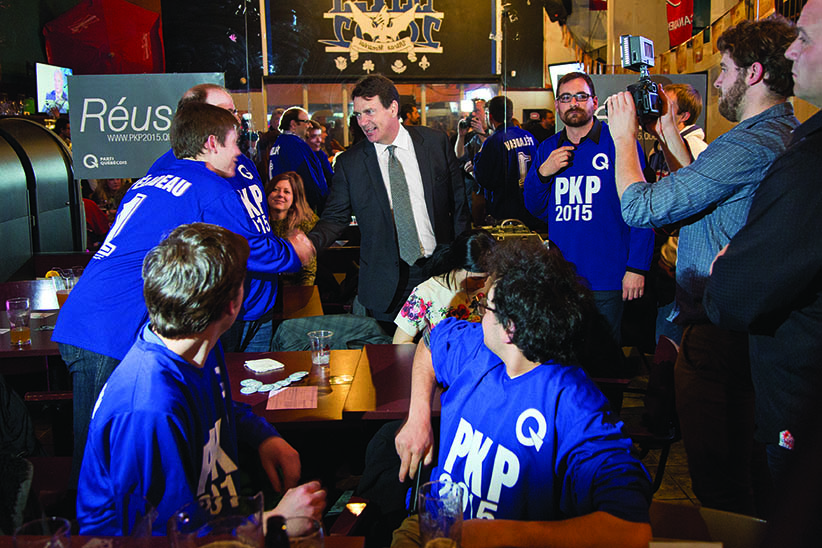 Quebec is now officially in its Péladeau moment.

Pierre Karl Péladeau, who has dominated the race for the Parti Québécois leadership practically from the moment he declared his desire for the job, took 57.6 per cent of the votes, handily beating out rivals Alexandre Cloutier and Martine Ouellet. The race amounted to a war of attrition, in which opponents cowed to Péladeau’s money- and media-driven Howitzer of a campaign.

In January, former cabinet minister Jean-François Lisée dropped out, only to be followed by his colleague Bernard Drainville in April and fringe candidate Pierre Céré last week. Cloutier and Ouellet, brave as they were, continued in part to buck the PQ’s historical trend of coronating its leaders. Ouellet, a hard leftist with little caucus support, will be expendable in Péladeau’s PQ. Cloutier, who rallied to second place largely based on his centrist appeal and youthful campaign, will be less so.

The question is whether either will want a place there. As we’ve found out in the past few weeks, Péladeau is a taciturn fellow known for brusque dérapages and aggressive whimsy. Two of the three leadership candidates, Ouellet and Céré, both said they had run-ins with Péladeau during the campaign, with Céré claiming that the media mogul blew up at him last February, after Céré compared Péladeau to central character in Citizen Kane. “You, mon tabarnac, I’m going to buy you. How much do you cost?” Céré says Péladeau told him. It’s exactly the sort of thing Charles Foster Kane would say to an opponent—minus the tabarnac, of course.

Another open question: will Péladeau be able to rally Quebec’s overwhelmingly federalist business community to his side? It’s doubtful. Attacking Canadian federalism and Quebec federalists is stock and trade during any PQ outing, yet its leaders have usually been careful enough to hedge their outrage at the Maple Leaf. We aren’t against Canada, they say, we’re just pro-Quebec, and it is our job to convince enough Quebecers that those two things are mutually exclusive. Péladeau, though, isn’t blessed with the same humility or nuance. He recently derided members of the provincial Liberal government as a bunch of Elvis Grattons—the (admittedly hilarious) caricature of a French-speaking, Canadian flag-sucking federalist dolt brought to life in the movies of deceased proto-separatist Pierre Falardeau.

The biggest threat to Péladeau’s legacy as PQ leader stems from having dragged his previous life into Quebec politics. He has refused to sell his shares in Quebecor, the media company founded by his father Pierre in 1965. Quebecor looms large over Quebec’s media and cultural landscape. It is the parent company of the province’s largest cable and internet service, the publisher of its largest circulation daily, and the owner of the vast majority of its book and magazine publishing outlets, among myriad other properties. Being at once the leader of the province’s official opposition and Quebecor’s controlling shareholder is “a ticking time bomb”, as Lisée once put it—one that will only tick louder and faster the closer Péladeau gets to power.

Yet if Péladeau has shown anything beyond a near-pathological desire to win the PQ leadership over the past few months, it’s his ability to adapt to the situation at hand. After all, he is a union-busting, pro-capitalist captain of industry who in a few short months has rebranded himself as a left-leaning and progressive defender of the vaunted modèle Québécois model of high taxes and state interventionism. His Quebecor shares are important to him today; maybe they won’t be as much tomorrow. Federalists are the devil today; tomorrow, he’ll be courting them as every other PQ leader has. A neophyte politician, Péladeau has nonetheless figured out the secret of successful politics: convictions are to be as tightly held as they are forever interchangeable.