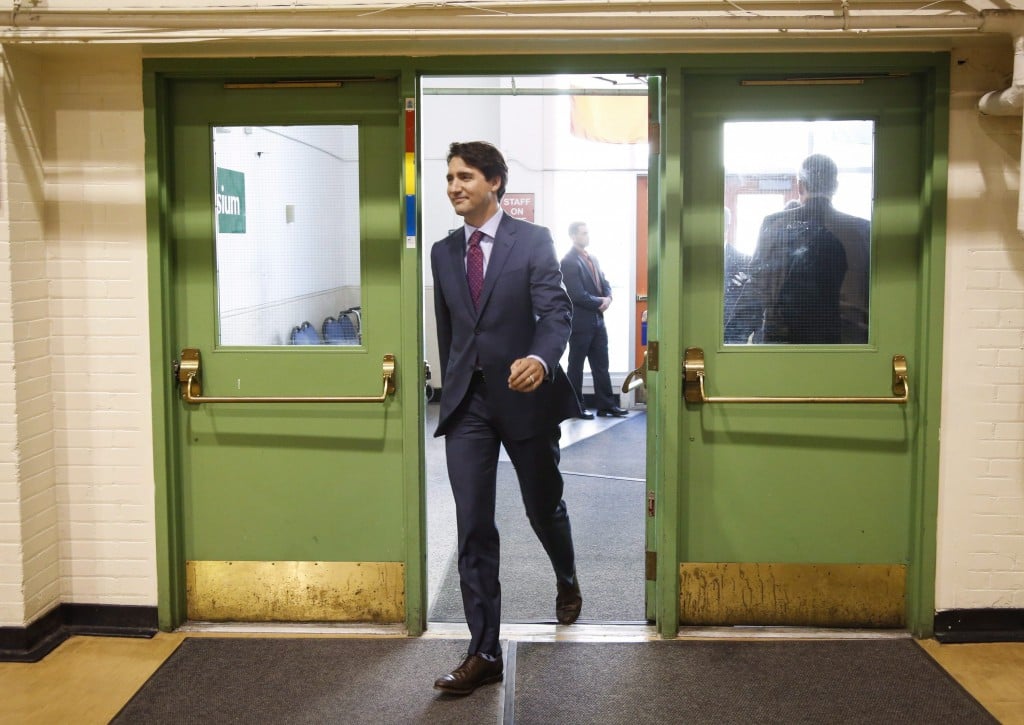 Prime Minister Justin Trudeau arrives to speak to the media after participating in a roundtable discussion on employment insurance in Calgary, Alta., Tuesday, March 29, 2016.THE CANADIAN PRESS/Jeff McIntosh

Trudeau said in an interview with Global Calgary that people in Edmonton and Saskatchewan who complain of being left out of changes to the program should feel fortunate their areas have not been harder hit by the downturn in energy prices.

“I think that both people in Edmonton and Saskatchewan should be pleased that they are not hit as hard as other parts of the country and indeed the province have been,” Trudeau said in the interview that aired at 6 p.m. Tuesday.

“We’re of course going to keep monitoring to make sure we’re doing everything we can for the places that need it.”

Last week’s federal budget boosted employment insurance benefits in some parts of the country, but left some areas of the oilpatch out.

The government said it picked 12 regions that needed the most help with extra weeks of benefits for jobless workers. Those include Newfoundland and Labrador, parts of northern and southern Alberta, northern British Columbia, northern Manitoba, northern Ontario, northern Saskatchewan, Whitehorse and Nunavut.

Calgary is on the list, but Edmonton isn’t and Saskatchewan Premier Brad Wall has complained that large parts of his province have also been shut out.

“We’ve heard the federal government say, well, they just sort of used this formula approach, they looked at where unemployment was high and decided to extend benefits in those narrow regions,” Wall said Tuesday.

“But if it’s about helping the oil sector, how can you miss two-thirds of our oilpatch? I am hopeful that they will (change their position on that).”

Trudeau was in Calgary for an EI roundtable where he met with a dozen individuals, including some whose benefits had run out and others receiving the benefit to get their views on what could be done better.

But the prime minister wouldn’t specifically commit to further improvements to employment insurance, adding the government is always considering ways “to improve or increase that impact if necessary.”

Trudeau said previous governments were keen to announce programs, but not so good at following up to make sure they were having the desired effect.

Jill Fink said she appreciated Trudeau taking the time to talk to unemployed workers. She applied for EI in February after she lost her job in the non-profit sector.

“The prime minister made a real effort to speak to everyone in the room, which I think was very kind,” she said.

Fink told Trudeau she is worried about people who don’t have enough savings and support while unemployed.

“He spoke to creating things that work for all Canadians and support people in the right place at the right time.”

Alex Kent, who also took part in the roundtable, lost his job as an environmental consultant last year when his company downsized. His employment benefits have run out and he has sent 130 resumes to as far away as Ontario.

He’s had no luck.

“I told him a bit of my story, but also asked him what his government will do to try to escape the boom-and-bust cycle,” Kent said.

“Is the government trying to be different and do different things?”