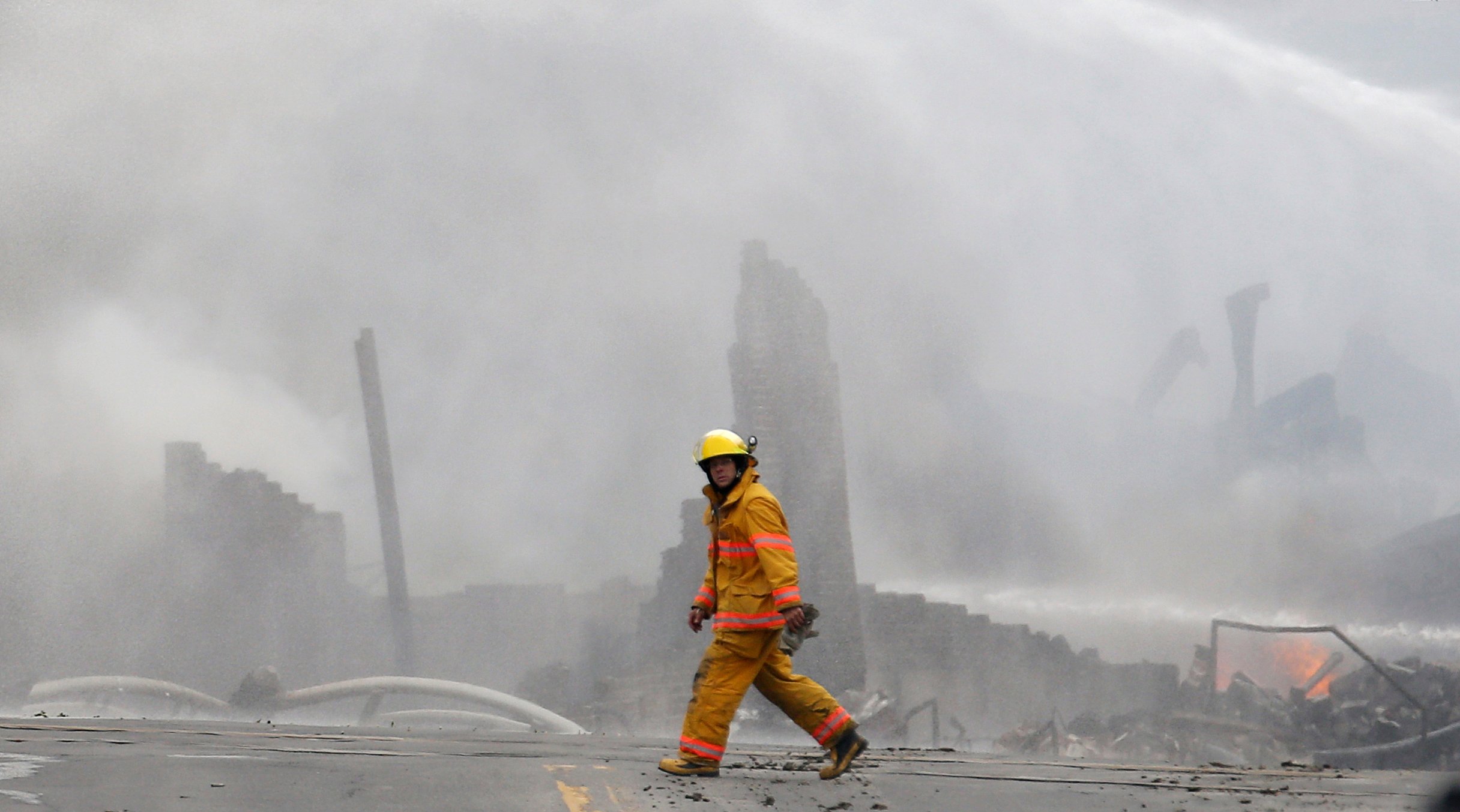 A firefighter walks past the remains of buildings after a train explosion at Lac Megantic. (The Canadian Press)

WINNIPEG – Alex Forrest clearly remembers what happened to a fellow firefighter who was traumatized by the deaths of two captains in a house fire.

It was two months after the Winnipeg blaze in 2007 that killed Tom Nichols and Harold Lessard, and Forrest knew his colleague was having a hard time coping.

“I checked up on him and he had killed himself in a garage, and he was holding the pamphlet from the memorial,” Forrest, head of the Winnipeg firefighters union, recalled last week.

“Many of the firefighters are still suffering the effects of that fire.”

Forrest is one of many emergency responders across the country, including police officers and ambulance crews, who are fighting for better treatment for post-traumatic stress disorder, or PTSD.

He says the condition has been around a long time — he remembers early in his career 25 years ago when one firefighter committed suicide — but people are more willing to talk about the issue now.

There have been high-profile cases in recent weeks, including that of Ken Barker, a retired RCMP corporal and dog handler who took his own life. His family told the Winnipeg Free Press that Barker had struggled with PTSD after seeing many horrific crimes over the years, including the 2008 beheading of Tim McLean on a Greyhound bus.

Vince Savoia is a former paramedic and advocate who set up the Tema Conter Memorial Trust Fund in honour of a young woman killed in Toronto in 1988. He said there have been at least 15 suicides by first responders across Canada since April 28. The total is based on media reports and information given directly to his organization, which embarked on a cross-country tour this year to raise awareness of PTSD.

The number surprised even him.

“I’m really hoping this is just a blip …. because I just can’t see this continuing,” Savoia said from his organization’s Toronto headquarters.

While suicide is the most extreme outcome of PTSD, both Savoia and Forrest say the condition can manifest itself in many different ways — depression, substance abuse, divorce or an inability to work.

A 2012 study by psychiatric researchers in Brazil estimated that, worldwide, 10 per cent of emergency responders suffer from PTSD. That number was comparable to the rate among United States military personnel who had served in Iraq. It was much higher than rates among the general population of the countries that were studied — those rates varied between one per cent and 3.5 per cent.

In Canada, there is a growing movement to try to treat PTSD in emergency responders. British Columbia and Alberta have recently changed worker compensation laws to make PTSD a presumptive condition. That means emergency responders suffering from the disorder will be presumed to have it as a direct result of their jobs, making it easier to qualify for compensation and treatment.

The Ontario government has reintroduced a similar bill in the legislature and Manitoba appears ready to follow suit. Labour Minister Erna Braun has discussed the issue with the firefighters union and a report from the province’s Workers’ Compensation Board is expected this fall, according to Braun’s press secretary, Naline Rampersad.

Aside from making compensation easier, the change would encourage emergency response management and workers to tackle PTSD, Forrest said.

“Now it creates a responsibility on the employer to recognize the issue. Just the fact that it’s becoming part of legislation, it will become an education tool for firefighters to realize that it’s an acceptable issue … and not to be embarrassed, that you have the ability to come forward.”

“I believe we are just scratching the surface of the tragedy of PTSD … and I see it’s getting more and more prominent because more and more people are coming forward.”