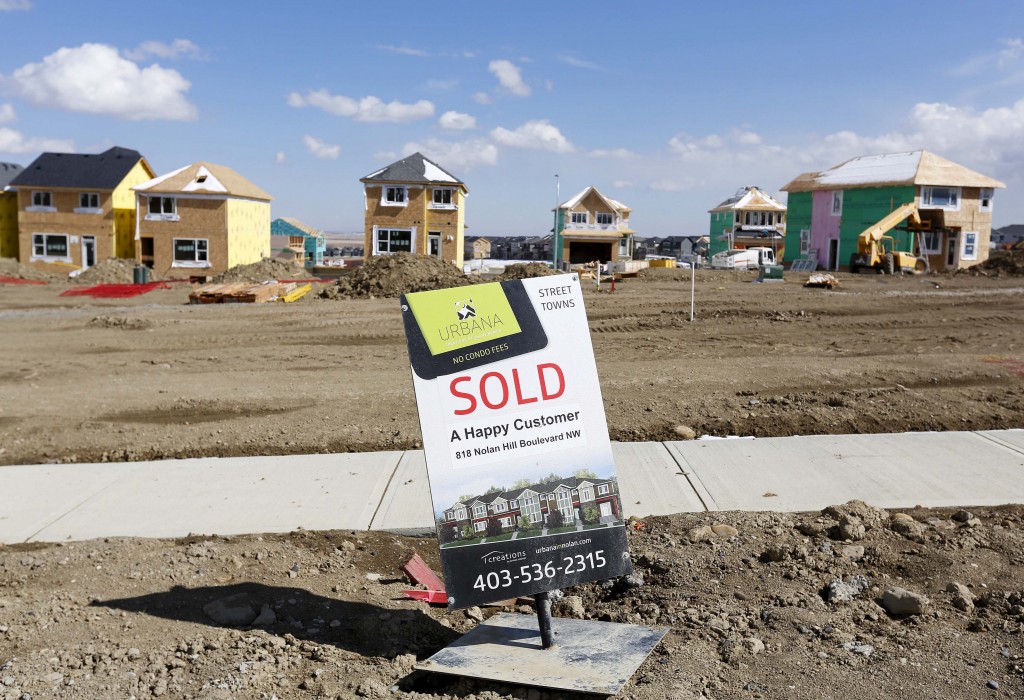 A sold sign is seen at an empty lot in a new sub division in Calgary, Alberta, April 7, 2015. House prices have fallen in Calgary after the price of oil plummeted late last year according to local media. (Todd Korol/Reuters)

CALGARY – Police say domestic violence in Calgary is on the rise at least partially as a result of a severe economic downturn that has cost thousands of jobs in the oil and gas industry.

Figures released by the Calgary Police Service Tuesday show officers have responded to 2,796 domestic violence calls in 2016 and the number has been increasing for the past three years.

“This is a 36 per cent increase over the average and we have not seen domestic violence rates this high since 2004,” said Staff Sgt. Rob Davidson of the Calgary police domestic conflict unit.

“What is important to remember is that these numbers represent families — victims and children — who are impacted and experiencing domestic violence.”

Alberta’s economy has been decimated by low oil prices, which industry groups estimate have led to the loss of more than 40,000 jobs in the province’s energy sector alone.

Davidson said the downturn can’t be entirely blamed for the increase in violence, but it does play a major factor. He said the increase in reports of violence are not confined to Calgary but involve other jurisdictions in Alberta as well.

“If most of us think of a healthy family who is experiencing unemployment and economic troubles and the stress that would bring, that’s pretty substantive,” he said.

“If you’re already in an unhealthy relationship and you’re already experiencing other issues — when you add that layer of unemployment and economic issues, we believe the financial strain makes it more likely to experience domestic violence.”

Karen Lee, who wrote about the abuse she suffered in two marriages in the book “The Full Catastrophe: A Memoir,” said the numbers are upsetting.

“Obviously it’s very tragic and there’s extra pressures right now. I don’t think economic pressure creates domestic abuse, but I certainly think that those extra pressures increase the chance that this might happen … people taking their frustrations out on the nearest people to them,” she said.

Lee, now a clinical psychologist, was attending a conference for professionals who work with families experiencing violence. She said she used to be the type of person who didn’t call police to report abuse, but fortunately times have changed.

Andrea Silverstone, the co-chair of the Calgary Domestic Violence Collective, said many victims have never experienced the bust of an oil boom in Alberta.

“Individuals who have never experienced that boom-bust cycle before or domestic violence — or have been experiencing it and hiding it — are finally now being able to access services. Because things have gotten so bad they can’t tolerate the situation that they’re in any more,” she said.