"I'm happy the change has been made but I am shocked that in 2017 we are still talking about women and escorts and pregnancy," one doctor said 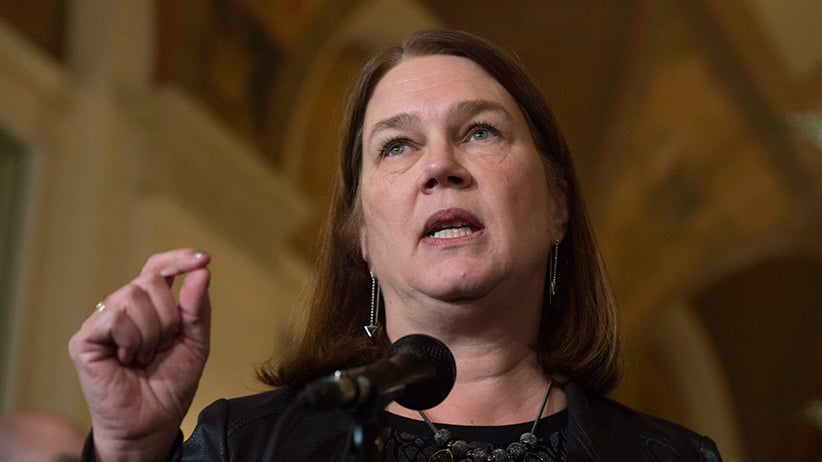 Minister of Health Jane Philpott speaks with the media during a break in meetings at the Finance Ministers meeting in Ottawa, Monday, December 19, 2016. (Adrian Wyld/CP)

OTTAWA — Health Minister Jane Philpott says Ottawa will now pay for someone to travel with indigenous women who need to leave their communities to give birth — a change to what she called an “extremely unhelpful” policy.

In an interview with The Canadian Press, Philpott said she heard a “cry loud and clear” from indigenous health experts who were urging the federal government to allow pregnant aboriginal women to leave home with an escort.

“It is a major policy change for us,” Philpott said. “It requires significant resources in order to be able to do that, but it is absolutely a wise investment.”

Indigenous women without proof of a medical need to have someone escort them have long been forced to have their children alone and far from from their land, language and heritage, the minister continued.

“There are a whole bunch of negative outcomes of that,” Philpott said. “What happens at birth has an impact on the rest of peoples’ lives for the whole family. So to have a positive, healthy birthing experience is extremely critical.”

Philpott said northern Manitoba doctors told her of women who were so terrified to travel alone that they would hide to avoid having their pregnancy discovered, only to present themselves at the last minute in communities ill-prepared for deliveries.

Too often, the cries heard in aboriginal communities were cries of death, not birth, she added.

“That set me on a path to be able to return the cries of birth in communities as much as possible,” she said, noting recent a recent $83-million budget investment for maternal and child health for First Nations and Inuit.

She also noted the need to transform the delivery of health in communities, saying a number of indicators clearly show considerable gaps between health outcomes of indigenous and non-indigenous people.

Philpott said recommendations from the Truth and Reconciliation Commission, which spent six years studying Canada’s residential schools, included acknowledging the state of indigenous health and the fact it’s the result of decades of ill-informed government policies.

Dr. Michael Kirlew, a family physician in Sioux Lookout, Ont. and Wapekeka First Nation, said he welcomes the change to Health Canada’s travel policy for indigenous women but is disappointed it took so long for the change to happen.

He said the policy is not a novel thing but rather something basic. Having a support person in pregnancy is associated with a number of positive health outcomes, he added.

“I’m happy the change has been made but I am shocked that in 2017 we are still talking about women and escorts and pregnancy,” Kirlew said in an interview.

Indigenous people needing to leave communities for end-of-life care still have to travel alone, he added.

“That means escorts for the end of life are still viewed as compassionate reasons to have them there,” Kirlew said. “Having an escort or having someone there — that is basic care.”

“It is something that we have certainly heard about,” she said. “In a step by step process, we need to make sure we bring justice and fairness to indigenous Canadians.”