Quebecers more concerned about corruption than anyone else in Canada 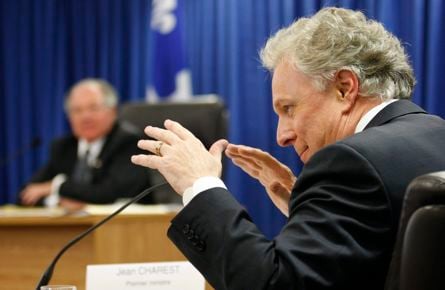 Quebecers are more concerned about corruption and the ethical standards of their politicians than the residents of any other province, according to a poll by Angus Reid. And 62 per cent in Quebec consider corruption in the province to be a broad or systemic problem.

The poll, conducted this week, surveyed 1,260 randomly selected Canadians, and found that 68 per cent of Quebecers are either “very concerned” or “moderately concerned” with corruption in their home province. British Columbia (61 per cent) and Ontario (56 per cent) finished second and third. As far as the ethics of elected officials as viewed nationwide, Quebec politicians scored the worst of any province. Forty-nine per cent of all Canadians said politicians in Quebec are “moderately” or “very unethical.” Ontario politicians finished second: 36 per cent of respondents deemed that province’s politicians to be unethical. But nobody is as harsh on their own elected officials, the poll found, as Quebecers themselves—58 per cent of whom describe their politicians as “moderately unethical” or “very unethical.” Just 24 per cent in Quebec described them as either “moderately” or “very ethical.”

When identifying root causes, 41 per cent of Quebecers blame “systemic failings best dealt with by policy reforms” and another 21 per cent say it’s a “symptom of broader public attitudes.” Just 22 per cent in Quebec blame corruption on a “few bad apples.” According to Angus Reid’s Jaideep Mukerji, “this fits in well with other polling we’ve seen that shows overwhelming public support for a broader public inquiry into the links between political parties and outside interests.”

The poll comes amid much coverage, including a cover story in Maclean’s about corruption in Quebec that Premier Jean Charest and the House of Commons both attacked as unfair. In the midst of the Bastarache hearings into allegations against Charest’s government, and with other controversies in recent years, the issue of political corruption has been front and centre in Quebec. But if Quebecers are concerned, they don’t seem to think the problem is unique to them. In fact, 47 per cent of Quebecers feel that politicians in their province are “just as ethical” as politicians everywhere else. On that point, the rest of Canada doesn’t seem to agree. Of those surveyed from outside the province, 44 per cent said politicians in Quebec were “less ethical.”

Methodology: From September 29 to September 30, 2010, Angus Reid Public Opinion conducted an online survey among 1,260 randomly selected Canadian adults who are Angus Reid Forum panelists. The survey included an over sample of residents of Quebec. The margin of error for the Canadian sample-which measures sampling variability-is +/- 3.1%, 19 times out of 20. The margin of error for the Quebec sample is 4.38%, 19 times out of 20. Results have been statistically weighted according to the most current education, age, gender and region Census data to ensure samples representative of the entire adult population of Canada. Discrepancies in or between totals are due to rounding.