Poppies? For legions, the big money's in real estate

By leveraging the land it sits on, a Calgary branch got a chic new hall with a trendy eatery and luxury condo tower on-site. Other cash-strapped legions may soon follow suit. 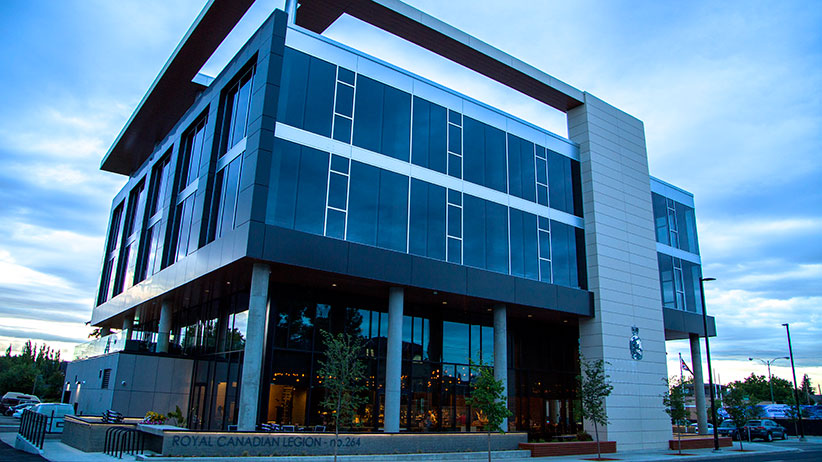 My knife cuts cleanly through the pork schnitzel, and it’s not too greasy, resting in a splash of stout-based jus. The herb spätzle strikes the right balance between crispy and chewy, while the arugula-and-fennel salad’s natural spice is softened by a lemon vinaigrette. As the evening goes on, I trip through the range of local microbrews on offer, from the XPA to Red Rage to the lemon-berry helles.

The servers are young and black-clad. The décor is black and rustic browns, washed in sunlight on three sides by eight-metre, floor-to-ceiling windows. The light fixtures are those hipster Edison bulbs. I am at Royal Canadian Legion, Branch 264.

It’s likely the most audacious turnaround venture in a country full of legion branches fending off the triple scourge of dwindling memberhip, crumbling halls and slowly fading relevancy. Calgary’s six-decades-old No. 264 hall, a windowless sprawl of beige bricks with a sprawlier parking lot in the Kensington district, is fenced off, destined to become a developer’s condo tower. Next door, as part of a land swap meant to take the branch from struggling to self-sustaining, that developer built a new legion-owned building with a chic public restaurant (dubbed “1918 Tap & Table”), a member’s lounge above it and two top levels with 15,000 square feet of office space that the legion plans to lease for cash flow—a resource whose scarcity in recent years has forced branches throughout Canada to shutter.

“It was a three-stream approach for revenue, which makes the entire operation viable,” says branch treasurer Mark Barham. The v-word is one that in recent years too few legion leaders have been able to utter. Nor have they been able to predict, as Barham does, that those revenue streams may yield $1 million in net annual income—money the Calgary branch treasurer says could be reinvested into local community projects for veterans and others.

Barham, a retired Tim Hortons franchisee with a salesman’s flair says he was first brought into 264’s leadership as a trustee, tasked with turning it around or shutting it. He believes most fellow legions are also sitting on their survival strategy: the prime land, usually downtown, upon which their leaky and underutilized buildings sit. Unlocking that value, Barham says, is the path forward for Royal Canadian Legions.

The alternative is gradual decline. Korean War and Second World War veterans are now in their 80s and 90s, while Afghanistan veterans have returned to a social network their combat predecessors never had: Facebook. The legion started this century boasting nearly 500,000 members at 1,600 local branches nationally; it now has just 275,000 members and 1,407 branches. Some national and provincial leaders now actively encourage troubled branches to amalgamate with healthier ones, and sell their buildings. Other branches are finding smaller or more affordable spaces. A handful are pairing with developers to build halls on a tower’s ground floor, and condos or seniors apartments above, including Cobourg and Port Dalhousie in Ontario, as well as Port Moody, B.C., whose condo/legion project sits near a Skytrain hub.

Legions across the country, many in squat 1950s or ‘60s brick buildings with insides that have hardly changed, are deciding how to cope with their infrastructure problems, says Brad White, national executive director. “They say: Do we really need a great, big building like that, when we had a population of maybe 1,000 veterans or members before, but we’re now at 200 or 100?” he says.

Other branches call No. 264 every week for advice about land sales and development (some have had development plans or sales fall through, or get vetoed by legion members; the Calgary branch was on its third developer before things clicked). Many are surviving just fine and don’t need an asset liquidation, while others sit on less valuable land, in towns with weaker real estate markets–certainly not the $10 million in Calgary land value that No. 264 occupied. In the future, legion branch health may be divided among property haves and have-nots.

In the mountain town of Canmore, Alta., a proposed development would give the branch a facility that’s modern, more reasonably sized than its current 10,000 square feet, and some sales income. “They’ll have a legion, plus investments that should take care of them for the rest of their days,” says branch president Darrel Jones.

At No. 264, change is bringing new members with its new look and sleek public restaurant. The old crowd doesn’t show up there; but it doesn’t show up that much to the member’s lounge upstairs, either. Members didn’t bring over the pool table or shuffleboard from the old hall, and have basically the same design as the modern eatery downstairs–and the same bill of fare, with a burger twice the price it used to be, grilled spring salmon instead of fish and chips, and pea-and-barley risotto on the menu where the baked macaroni with beef used to be. The place is too new to reek of fried food, and it likely never will.

“It doesn’t feel like a legion to me at all,” says a former RCAF pilot in his 80s, who doesn’t want his name used. Many of his fellow veterans now drink at other branches. His Thursday evening beer mate, a legion youngster in his mid-60s, has long liked No. 264 as a quiet place to drink and hear literal war stories. His wife would never accompany him to the old hall, he says; but this newfangled legion, sure.

Bill Cox, Branch 264’s president, acknowledges he’s lost longtime members who prefer the traditional atmosphere. But not as many as he’s lost to old age.

“When you move from one town to another, you lose friends, lose memories,” he says. “But you move to a new one you get a chance to rebuild that, to make new ones.”