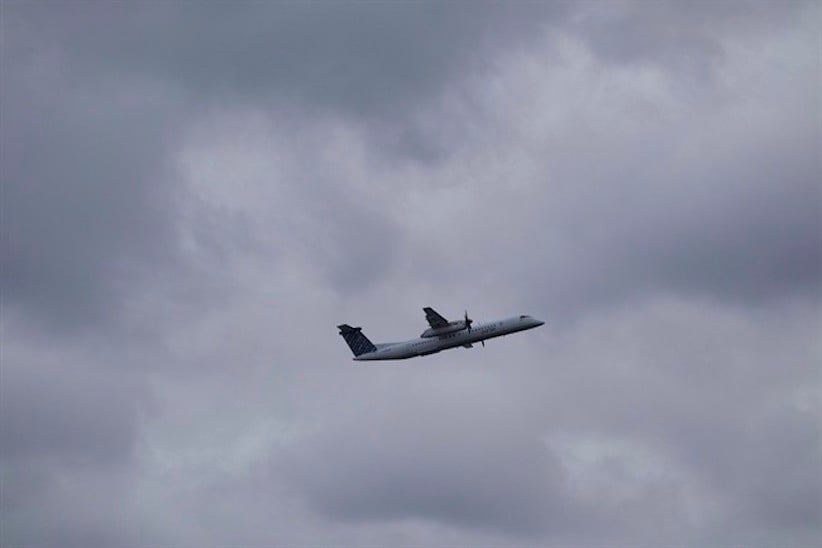 TORONTO – Two crew members of a Porter Airlines flight en route from Ottawa to Toronto were slightly hurt Monday when a plane narrowly avoided a mid-flight collision with what may have been a drone, the airline said.

The Dash 8 aircraft with 54 passengers was flying at just under 3,000 metres over Lake Ontario at 7:30 a.m. E.T. and was about 55 kilometres from Toronto’s island airport when the incident occurred.

“The pilots noticed an object in the distance (and) as they approached the object, they realized it was very close to their flight path,” Porter Airlines said in a statement.

“The pilots’ initial assessment was that it looked like a balloon. After debriefing, there is potential that the object was drone.”

The pilots took evasive action and, contrary to some initial reports, there was no contact between the aircraft and object.

The two flight attendants, who were in the process of securing the cabin for landing and weren’t in their seats, were pitched about the cabin, but continued with their duties.

No passengers were hurt and the plane landed normally. The flight attendants were taken to hospital as a precaution and released.

A senior investigator with the Transportation Safety Board of Canada told The Canadian Press that it was impossible to say at this point what the unidentified object was.

“It happened so quick, they have no idea what it was. It’s just something that they knew they were going to hit unless they took evasive action,” Peter Rowntree said. “It happened that quickly.”

Rowntree said the aircraft ducked under the object but could not say exactly how far the plane dived. He did, however, say the encounter was “very close.”

Investigators have taken cockpit voice records and the flight-data recorder for analysis and to see how much the aircraft descended during its “very quick evasive action,” he said.

“We may never be able to determine what exactly they saw,” Rowntree said.

The growing threat of collisions with drones prompted Transport Canada in September to warn those flying them about the potential hazards they presented.

“Before you take to the skies, make sure you understand the rules and follow them,” the agency says on its website. “Not doing so could put lives at risk and cost you up to $25,000 in fines and/or jail time.”

While flying drones under 35 kilograms requires no special permit, users must stay away from flying within nine kilometres of an airport or helicopter landing pad and no higher than 90 metres.

Porter operates flights out of Toronto’s island airport to and from several Ontario cities, as well as to seven destinations in the U.S.