Greatest collection of Canadian stamps ever assembled ready for auction

Why few are likely to remain here 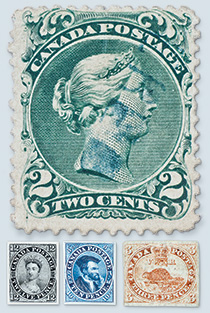 A few years ago, Ron Brigham, who has amassed what is recognized as Canada’s most valuable private collection of stamps, launched a bid for Canada’s rarest stamp that says everything about his postage obsession, not to mention the surprisingly cutthroat world of philately. The 1868 two-cent Large Queen on Laid Paper, as it is known, is so rare that only two stamps were known to exist. Brigham already owned one, while the second, of lesser quality, was held by an American collector. One night in 1999, while the two men both happened to be in Australia, Brigham made his move, offering $300,000 for the stamp.

“Why would you want it?” the American collector asked. “You’ve got the other one.”

“Because,” Brigham told him, “I’m going to burn yours.”

The owner didn’t sell. And as Brigham sits in the basement of his unassuming home in Brampton, Ont., leafing through his collection—estimated by some to be worth at least $10 million—and retelling the story, it’s hard to know if he was joking or serious.

But what started as a childhood hobby, when Brigham’s father gave him a $3 package of 10,000 stamps, became a serious quest starting about 30 years ago. Now he is 69, and the retired businessman’s walls are covered with plaques and trophies for philately. A nearby safe the size of a fridge is packed with some 160 volumes of stamp books containing his 20,000-item collection. As Brigham opens up one volume, entitled “The Pence and Cents of Canada: 1851-1868,” he points to a page of stamps that includes an 1851 image of Queen Victoria printed in black ink, a mint version of which sold earlier this year for $225,000. “You’re looking at 12 stamps that are worth $1 million,” he says. “This is just the opening page.”

While there’s no official ranking of private stamp collections in Canada, it’s widely understood that no other collection contains as many rare and valuable stamps as Brigham’s. Even Canada Post relied on Brigham in 2001 when it wanted to celebrate the 150th anniversary of Canada’s very first stamp, but didn’t have a copy of its own. Brigham opened his doors for the corporation to borrow the die proof.

But all that’s about to end. Later this year, through his own auction firm, Brigham will begin to sell everything off. Not one stamp will remain. “I’m old,” he says. “I want to make sure I have the pleasure of seeing where they go.”

It’s a process that is expected to last more than four years, and will almost certainly see the collection broken up and dispersed around the world. “If you want to have the finest collection of Canadian stamps in the world, then you have to go to Brigham’s sales and you’ll have to have $10 million in your stamp budget,” says John Jamieson, owner of the Saskatoon Stamp Centre and a philatelic expert. “I don’t know any collector in Canada who has multi-millions of dollars to spend on stamps.”

To amass the collection in the first place involved multiple trips abroad for Brigham, to places as far-flung as Spain, Singapore, Great Britain, Switzerland and Australia, with some trips undertaken to acquire a single stamp. Some stamps took decades to acquire. “The difficulty of acquisition is not necessarily money, it’s the availability,” says Charles Verge, a historian and stamp expert tapped by Brigham to run the auctions. In some cases, that meant waiting for a collector to die and for his or her estate to put a particular stamp on the market. Along the way, Brigham became the only Canadian to win the World Stamp Championship, which he did in Belgium in 2001, a competition where stamps are judged on importance, research, rarity and presentation.

Brigham refuses to say how much he spent to acquire his collection. Nor is it clear how much he will earn from the auctions. “It is very difficult to ascribe values when material has never been on the market,” says Verge. He predicts a single stamp such as the 1868 two-cent Large Queen on Laid Paper could sell for as much as $1 million.

The auctions are being promoted to an international array of philatelists. Some collectors may only be interested in Brigham’s collection of pre-Confederation stamps, while others will be drawn to stamps with printing errors, such as his block of stamps issued in 1959 to commemorate the opening of the St. Lawrence Seaway, which were printed with a maple leaf and American eagle upside down. “It would make all our lives easier if someone came by, dropped a cheque and said: ‘I want all of it,’ ” Verge says. “It’s likely not going to happen.”

Brigham clearly has a collector’s appreciation for his stamps, referring to them as little “da Vincis.” And after countless hours spent collecting, researching and mounting his stamps, he admits it will be difficult to see them go.

Still, he’s serious about his collection without being obsessed. At one point, while showing off his stamps, Brigham uses tweezers to pick up a block of three-penny beaver stamps, the design for which was originally sketched out on a napkin by Sir Sandford Fleming in 1851. But then, Brigham accidentally loosens his grip, allowing the stamps to slip away, and for a few terrifying moments, the only complete mint-condition block of Canada’s first stamp flutters through the air.

Mercifully, they land perfectly flat on the carpeted floor. But as Brigham leans down to pick them up, he looks over at Verge, whose eyes remain frozen wide open. “What are you worried about?” Brigham asks with a smirk. “It’s just a stamp.”