Politicians know they need to rush in when disaster strikes. They are often met with cynicism. But sometimes they rise above it

Rare is the mayor who wins plaudits for scolding constituents, and rarer still the one who does it with enough flair to inspire a meme. But after the week Naheed Nenshi had, perhaps we shouldn’t be surprised he of all politicians pulled off the feat. Calgary’s ubiquitous mayor had just lit into a pair of judgment-challenged canoeists he’d seen paddling the swollen waters of the Bow River, noting that a rescue boat sent to save wayward thrill-seekers is one fewer available to save flooded-out residents. “I have a large number of nouns that I can use to describe these people,” Nenshi said, all but shaking his finger toward the TV cameras. “Stay off the river, and I won’t use any of the nouns that I really want to use.”

Within moments, the hashtag “#Nenshinoun” was trending on Twitter. “‘Don’t be a #NenshiNoun’ should definitely be on a shirt,” wrote one fan, while another added: “Thanks for keeping it real, Mayor Nenshi!!” The idiom had a pleasingly marmish quality (“Don’t make me come down there!”), and over the next few hours, it became a kind of rallying cry. Calgarians who pitched in were heroes, and those who didn’t were Nenshinouns—villains in the legend of their indefatigable mayor’s epic battle against the flood. They were, in short, on the wrong side of history.

It was Rahm Emanuel, the mayor of Chicago, who said it best: “Never let a serious crisis go to waste.” And if the former chief of staff to Barack Obama meant it less crassly than it sounds (Emanuel saw disasters as opportunities to drive through policy change), the adoration directed at Nenshi over the past few weeks shows that the more cynical interpretation has no less merit. Already riding 75 per cent approval ratings among Calgary voters, the 41-year-old with the doughy cheeks and the FM voice has transformed since last Thursday from a competent local pol to a national phenomenon—the sort of leader you could easily picture on the federal stage. Nenshi’s pitch-perfect blend of authority and empathy has served him well. So too has his instinct for the social media photo op. Nenshi in his hard hat; Nenshi at the emergency command centre; Nenshi addressing a crowd of volunteers: these tweeted images melded over a few short days into a kind of defining montage of the relief effort, and by the time the waters receded, the mayor was synonymous with his city’s resilience. 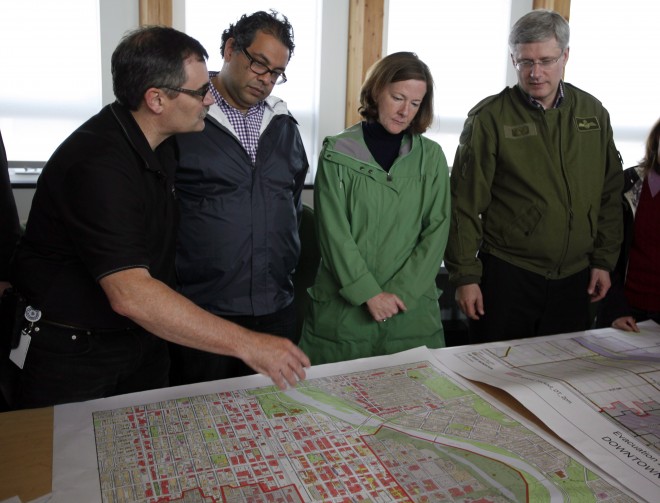 Nenshi wasn’t the only leader racing to the scene. Prime Minister Stephen Harper and Alberta Premier Alison Redford landed in Calgary the day the Bow and Elbow Rivers breached their banks—mindful, evidently, of lessons of former U.S. president George W. Bush, who took a public shellacking for his tardy arrival in New Orleans following hurricane Katrina. Both are from Calgary. Both were quick to offer the words southern Alberta’s flooded-out residents were keen to hear. “We will do everything to ensure that people can rebuild their homes and rebuild their lives,” said Redford in announcing that the province has already earmarked $1 billion in flood relief. “We’re committed to making sure we take the time to do it right.”

These responses suggest admirable levels of savvy among Canadian politicians, says Arjen Boin, a Louisiana State University professor who has studied leadership in the aftermath of Katrina and other disasters. But elected leaders who shine in such moments do more than merely say the right things, he says. They provide warnings as early as possible about impending trouble. They ensure key players in the emergency response phase work from the same plan. They exercise good judgment when making critical decisions, such as which neighbourhoods to evacuate and when.

Perhaps most importantly, says Boin, they manage to provide an uplifting message to stricken citizens without coming across as exploitative. “Some politicians find that last balance very easy,” he adds. “Rudolph Giuliani after the 9/11 attacks is a good example. Jimmy Carter, on the other hand, had no idea.”

So far, the key leaders in Alberta’s crisis appear to be meeting or exceeding expectation. Nenshi got the first step right when he cut short a speaking tour of Ottawa and Toronto after learning at noon Thursday that trouble was on its way. By then, a surge of grimy water had blown through the mountain town of Canmore, as well as other communities on the eastern slope of the Rockies, and anyone who understood gravity knew that Calgary lay in the path of a wrecking machine. Nenshi finished a luncheon speech to the Canadian Club in Toronto while his staff scrambled to find space on a flight back home. By 10 p.m. local time, he was on the ground in his city’s emergency operations centre, ready to assume the special powers accorded to him during times of emergency.

Harper and Redford were similarly responsive, and ready to help by the time they arrived the following morning. Ottawa had by then given the nod to the military to send in the first 1,300 troops, along with eight helicopters, a transport plane and trucks to assist with evacuation and search and rescue. RCMP officers swept in from detachments around Alberta to help clear buildings and secure evacuated neighbourhoods. Harper’s only misplay was to appear in a military flight jacket—a choice that irresistibly summoned memories of Bush touring areas ruined by Katrina, and that simply stretched credulity, given that the PM never served in the Canadian army. That the three leaders appeared together, and spoke as one, was in itself remarkable considering the fraught history between them (Redford, a Progressive Conservative, was stung when federal Conservative operatives backed the upstart Wildrose Party in the last provincial election; Nenshi, meanwhile, identifies as a small-l liberal). But their co-operation has been warmly received. “Our leaders’ unified, take-charge attitude is not only most welcome,” enthused a Calgary Herald editorial, “it is consoling.”

Still, pitfalls lie ahead that can quickly reverse the warm sentiment. “It’s the long term that matters,” warns Shachi Kurl, a pollster with Angus Reid Global who tracks the approval ratings of provincial leaders across the country. “It’s not just, ‘Is this person seen to be compassionate and caring and on-the-job and in action at the height of the flood. It’s, ‘Is the funding there? Is the administrative support there? Are people taken care of in the long run?’ If people are languishing for long periods in temporary housing, and if businesses in downtown are having trouble getting up and running, nobody’s going to remember or care about the earlier photo ops.”

The stakes are high, especially for Redford, whose approval rating among Albertans lagged before the disaster around 29 per cent following a series of ethics scandals, and who recently brought a red-ink budget before the provincial legislature. So great is the scale of damage that on Monday, the premier stressed that the province saw the rebuild and recovery as a 10-year project. That means the province’s share of relief and recovery costs will drive it deeper into debt, creating cost pressures on other provincially funded programs.

All of which makes it the more vital, says Kurl, for Redford to build goodwill during her brief respite from the regular grind of politics. “You’ve got everyone fixated on one issue,” the pollster explains. “The whole nation, the province, the city is watching. If you can be seen to be striking the right tone, it can be, in the most cynical sense, an opportunity.”

Nenshi, it goes without saying, is careful not to frame things in such terms. But he admits he feels gratified by the sort of adulation he experienced Monday, when he rose on a metal box to address 2,500 volunteers at McMahon Stadium and was greeted with wild cheers. He also admits that the honeymoon can’t last. “As we move forward, tempers will fray,” he told Maclean’s in an interview. “People have lost a lot. There’s going to be a lot of pain. People are going to have problems with insurance. There’s the challenge of getting flood relief from the provincial government out to the people who need it.”

But with that, Nenshi reverts to the message of positivity and resolve that has elevated him to stardom in the previous week. “You know what? Every one of us has only one thing in mind,” he says. “To make sure everyone is safe, and gets back into their home. If we keep that in mind, if we maintain a little goodwill and keep open hearts, we’ll be able to get through this okay.”

Rahm Emanuel himself could hardly have said it better. 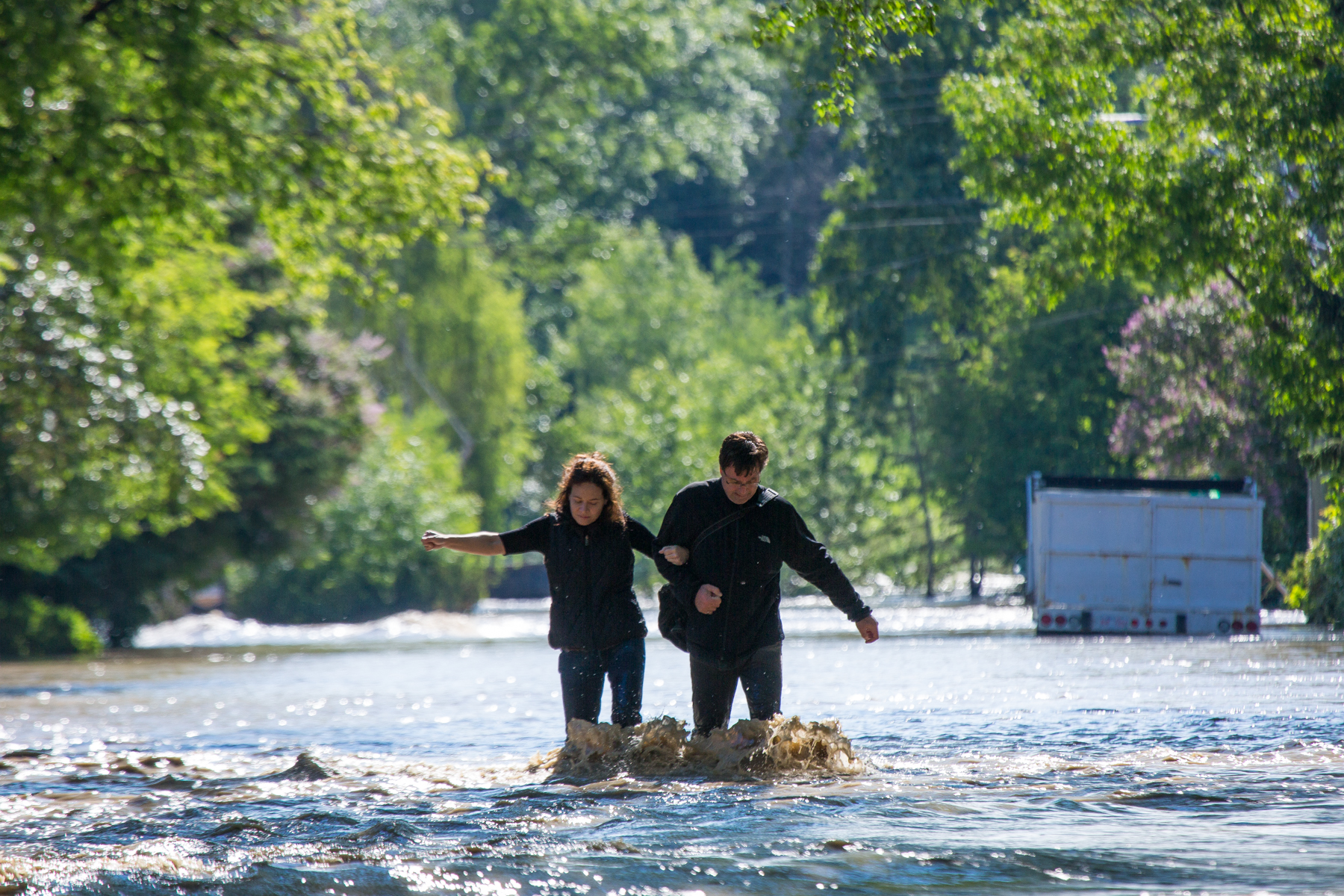 Residents of Elbow park in Calgary make their way down their street after their house was flooded. Photograph by Chris Bolin