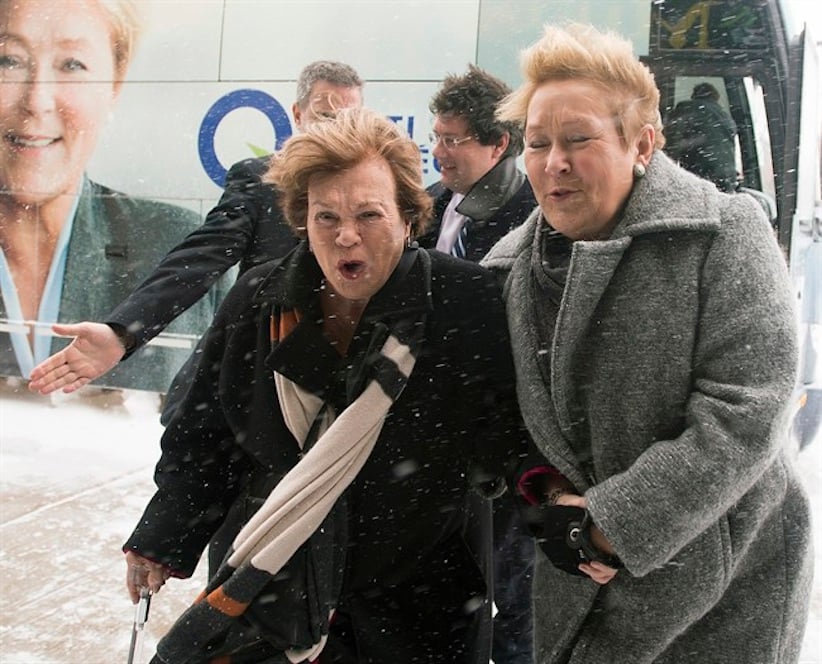 MONTREAL – A prominent supporter of the Parti Quebecois’ values charter made waves in the provincial election campaign on Sunday, using the example of an apartment swimming pool to warn of the dangers of religious accommodation.

Janette Bertrand, the head of a pro-charter group known as the Janettes, argued the accommodation of religious minorities in everyday life threatens to erode the equality between men and women.

And she gave an example to illustrate the need for a charter.

Imagine, she said, two men come to a swimming pool in a Montreal apartment, and the sight of women in the water upsets them.

“Well, suppose they leave, and go see the owner,” said Bertrand, an 89-year-old former actress and journalist, emphasizing that the owner would be happy to have such “rich” McGill University students in the building.

“Then they ask, ‘Well, can we have a day,’ and they will pay… And then in a few months, it’s them who have all the pool time.”

“That’s what will happen if there is no charter.”

Bertrand made the comments alongside PQ Leader Pauline Marois at what was referred to by the party as a “secular brunch.”

In recent days, the PQ has tried to turn attention toward identity issues such as language and the values charter as the April 7 election enters the home stretch.

The party’s charter of values would ban public sector employees — including teachers and daycare workers — from displaying or wearing religious symbols such as the hijab.

It would also includes a framework to deal with accommodation requests.

Later, Marois accused Liberal Leader Philippe Couillard of not having a plan to deal with such issues.

“He doesn’t have one. He will decide it case by case,” she told reporters.

Marois said Couillard’s ad hoc approach is exactly what previous studies of the issue, such as Quebec’s 2008 Bouchard-Taylor report, suggested the province avoid.

The Liberal leader was grilled on a similar issue during last Thursday’s debate.

Coalition party head Francois Legault peppered him with questions about whether a Quebec police officer should be allowed to wear a hijab.

Couillard didn’t take a clear position and said he wouldn’t speculate since the specific situation hasn’t come up in Quebec.

Legault’s party is also in favour of a secular charter, though it doesn’t go as far.

For his part, Couillard again Sunday accused Marois of practising the politics of division with her focus on the charter. He said his party is committed to “building” up the province and focusing on “inclusion,” not “exclusion.”

From the beginning, protection of the French language and the values charter were expected to be key to the PQ’s campaign, but they originally took a back seat to talk of whether there would be another sovereignty referendum — an idea disliked by many Quebecers.

The proposed charter has been highly controversial but polls suggests it’s favoured by a majority of francophones, a crucial voting group in the tight election.