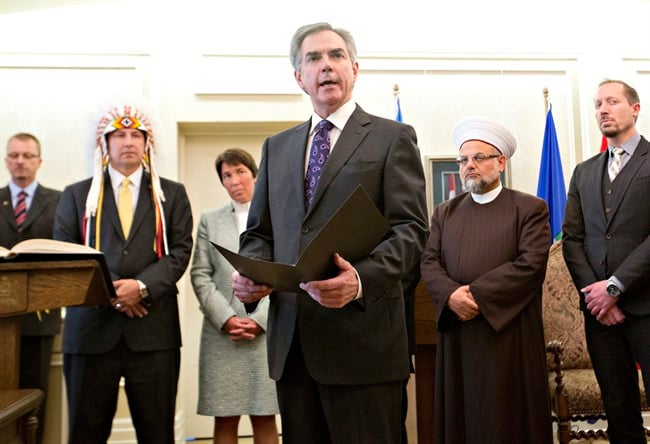 Jim Prentice gives an oath as he is sworn in as Alberta’s 16th Premier in Edmonton, Alberta on Monday September 15, 2014. (Jason Franson/The Canadian Press)

EDMONTON – Jim Prentice, sworn in Monday as Alberta’s 16th premier, promised to remake the face of a scandal-scarred government — and he did so by literally bringing in new faces.

Prentice announced he had taken the unusual step of reaching outside his government caucus to name two unelected civilians to fill the key cabinet posts of health and education.

“Building in a new government means bringing in new blood,” said Prentice in a speech after he was sworn in at Government House.

“Both are strong and experienced leaders with a record of accomplishment.”

Gordon Dirks — a former Saskatchewan MLA and chairman of the Calgary Board of Education — is the new minister of education.

Prentice said he will run in a byelection the coming weeks, as will Mandel and Dirks, but didn’t give details on when or where.

The two appointments led the way in a shakeup and a slimming down of the cabinet of former premier Alison Redford.

Key Redford ministers such as Doug Horner, who was in finance, and Fred Horne, who was health, were punted to the backbenches, while others moved to new portfolios.

Horner, however, will still work as an adviser to Prentice.

Prentice said more change is on the way, including legislation to clean up boondoggles on government patronage and contract tendering.

“Alberta is under new management,” he said.

“We are introducing tough new rules to put an end to entitlements and repair the bond of trust between the people of Alberta and those who represent them.

He left public life in 2010 to become a bank executive.

But he said he returned to the political arena after witnessing the meltdown of the PCs under Redford, turmoil that led her to quit the top job in March ahead of a caucus and party revolt.

Redford was found to have spent lavishly on herself and aides while taking private trips on government planes.

She flew her daughter and her daughter’s friends, and was later found to have been secretly constructing a pricey penthouse retreat for herself atop of a government building.

Prentice promised a renewed commitment to balancing the books, paying down debt, and building schools for Canada’s fastest-growing population.

Prentice also said that after the byelections, he will re-set the government’s fall agenda with a new legislature session and a throne speech.

Alberta’s opposition parties said Prentice’s first go at democratic renewal was stale, and not too democratic.

“Fifteen of the cabinet ministers are the same people who were at the table in the Redford era and in her cabinet,” Wildrose Leader Danielle Smith told reporters in Calgary.

“We had all of this hype about how this cabinet was going to be the next generation of leadership and would be a new look, and you end up with 75 per cent of the same people at the table.”

“And you have two outside ministers who don’t have an elected mandate responsible for more than 50 per cent of budget spending.”

NDP Leader Brian Mason said he is opposed to Mandel and Dirks being given cabinet jobs before being elected to the legislature, calling it a “basic democratic principle.”

He said the cabinet as a whole is weak.

“It’s not an auspicious start. If this cabinet were a horse we’d probably have to take it out and shoot it,” he said.

— With files from Bill Graveland in Calgary