Premier: Racism not unique or more prevalent in Saskatchewan

In the wake of the killing of Colten Boushie, Premier Brad Wall insists racism is a national issue 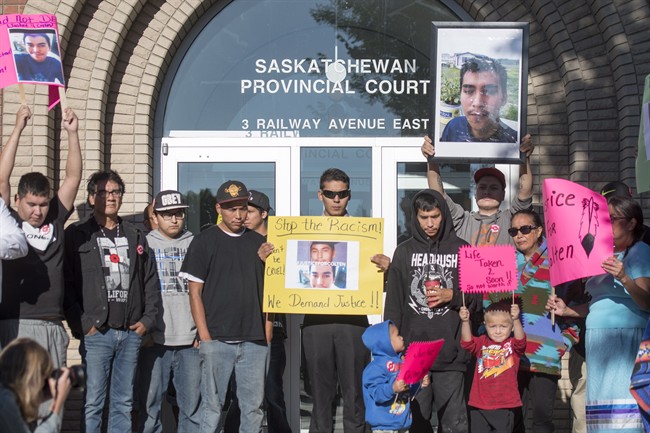 Family, friends and supporters for Colten Boushie hold signs during a rally outside of the Saskatchewan Provincial Court in North Battleford,Thursday, August 18, 2016. (Liam Richards/CP)

REGINA – Saskatchewan Premier Brad Wall says some of the racism that has come to light since the shooting death of a 22-year-old Cree man is a national problem.

Wall says racism is not unique to Saskatchewan, nor is it somehow more prevalent in the province as some have suggested.

Racial tension has been high since Colten Boushie was killed Aug. 10 after the vehicle he was in drove onto a farm near Biggar west of Saskatoon.

The property-owner, 54-year-old Gerald Stanley, is charged with second-degree murder and is free on bail.

Wall says young people are more enlightened, but he doesn’t know of any program that could address racism among older generations.

“I’m not sure what program you could do to deal with the other generations, (which) aren’t frankly as enlightened as our kids are, except to speak out boldly about it, except to make it unequivocally clear that’s not this province. That’s not how we are good neighbours in Saskatchewan,” he told reporters after a cabinet shuffle Tuesday.

“Unfortunately, this isn’t unique to Saskatchewan. I just want to reject … that it’s somehow unique or somehow has a greater presence in our province. Sadly, it has a presence right across the country.”

Screen grabs after the shooting from a Saskatchewan farmers group Facebook page were widely circulated. One post, written by a councillor with the Rural Municipality of Browning, said Stanley’s “only mistake was leaving three witnesses.”

Wall said Tuesday he has received a letter, which he wouldn’t release, from the Federation of Sovereign Indigenous Nations asking him to address racism in the province. Wall said he’s happy to sit down to discuss the issue, but suggested the province has already done several things.

Saskatchewan has made treaty education mandatory and is following up on recommendations from the recent Truth and Reconciliation Commission on residential schools, he said.

“We need to start building an understanding, especially in places where there may not be a high First Nations population.”

“The hope that we should have is, the next generation, they don’t have some of the thoughts perhaps that even ours did or that our parents did. I think we should be hopeful about that.”