Closer relations promised during Prentice's visit to B.C. on Monday, his first trip outside Alberta since being sworn in as premier 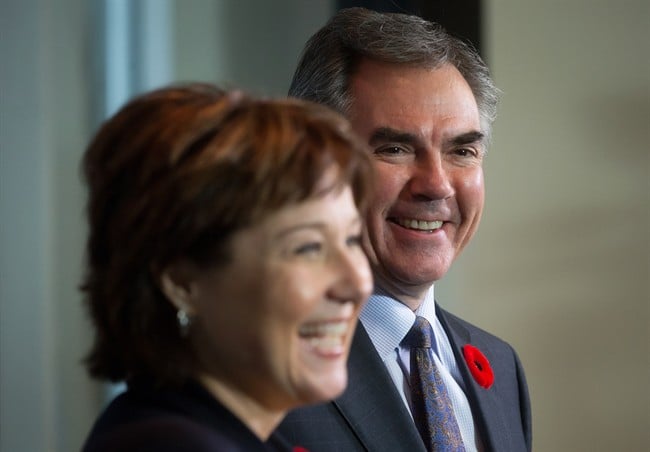 Prentice’s visit to B.C. on Monday was his first trip outside Alberta after being sworn in as premier Sept. 15.

When asked by reporters if they had moved on from the rancour that was visible with Redford, Clark did not respond directly but instead praised Prentice.

“There hasn’t been a premier in Alberta’s history who has understood British Columbia’s uniqueness as well as Premier Prentice does,” she said.

Clark noted that Prentice, while serving in the cabinet of Prime Minister Stephen Harper, was the minister for the environment and for aboriginal issues.

“We have so much that we have in common that we want to work together on and, in order to make that work, we need to understand also how we’re different,” she said.

“Good working relationships begins with a depth of understanding.”

Prentice said he and Clark discussed a number of issues, including trade, Asia Pacific markets and the proposed Enbridge Northern Gateway pipeline to take bitumen from Alberta to tankers on the West Coast.

“In keeping with the candour, the frankness, the respect that we have for each other, it was an opportunity to sit down and talk about a wide range of issues,” he said.

“I’m confident that we’ll have a warm relationship and a positive relationship that will be advantageous for both of our provinces.”

B.C.’s relations were not so rosy with Redford due mainly to the Enbridge line.

Clark insisted that her province’s concerns with the pipeline be addressed, including environmental protection, dealing with the concerns of aboriginals, disaster preparedness and profit sharing.

The profit sharing put her relationship with Redford in the ditch in 2012 when Redford made it clear that Alberta would not share its oil royalties.

“I wouldn’t say we made a whole lot of progress,” Clark told reporters in October 2012 after meeting Redford in Calgary.

More than a year later, the issue came to a head when Redford threatened to cancel a meeting with Clark in Vancouver just hours before it was to go ahead, saying that “B.C. is seeking to negotiate additional benefits.”

The two sides met after all and hammered out the framework for a deal that would see Clark’s conditions for pipeline approval honoured — but not with bitumen royalties from Alberta.

Harper’s government approved Northern Gateway in June subject to the resolution of 209 issues cited by a joint review panel.

The project has faced widespread criticism: that it would pose a danger to the environment, that it would have an impact on aboriginal groups and that it would sustain a form of energy damaging to the long-term health of the planet.

“The purpose of this meeting was to ensure that I understood where Premier Clark was coming from and vice versa, to be able to have a frank relationship where we trust one another, where we can work together,” he said.

“It’s been an excellent meeting in that sense.”

“Alberta, British Columbia and Saskatchewan represent 60 per cent of Canada’s trade with Asia. We’re a trading bloc that produces $500 billion in GDP,” she said.

“We have an opportunity in front of us to really grow the national economy.”