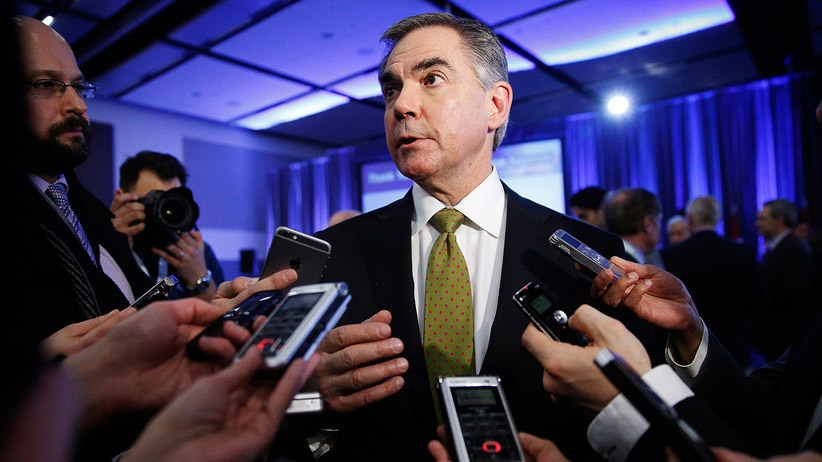 You have to give the Alberta government credit for the clarity of its bad-news 2015 budget, introduced yesterday in advance of an anticipated snap election. Robin Campbell’s finance ministry has moved away somewhat from the complexity and artificiality of the Alison Redford/Doug Horner budgets, and they have even put the myriad new fees and taxes on one convenient web page. This will save the opposition parties enormous labour in creating their election advertising.

Albertans were, all at once, endearingly united in calculating their personal pain from the Prentice budget. (The parking lots of liquor stores and gas stations did get awfully crowded in the eight or so hours before the sin taxes were hiked, presumably by Order-in-Council.) Me, I’m eyeing the cigarettes I use to overcome the terror of the blank page, thinking of the extra $100 or so my combustible idea sticks will cost me over the next 12 months, while also applauding myself for being a non-driver and dodging the first-order hit from the 44 per cent increase in gas tax.

But the big relevant news of wider significance isn’t any individual’s suffering or inconvenience, or even lack thereof. I think it’s the formal abandonment of Alberta’s flat provincial tax structure, crunched down by Ralph Klein and finance minister Stockwell Day in 1999.

In retrospect the Alberta flat tax seems like the last major change in Alberta life engineered by Klein and his cadre of reformers—a sort of victory lap that signalled the final victory of conservative government austerity in Alberta. Klein’s trims in government spending, which still have Alberta leftists howling, have been imitated at times by governments of all stripes around the world; his curtailing of health care was certainly matched next door in NDP Saskatchewan. Democratic socialists and probably even communists everywhere now accept the need to avoid “structural deficits”; in Greece, Syriza and the Eurocrats stare daggers and shout obscenities at one another over the details of the next few years’ public spending, while tacitly agreeing that, in the long run, reality is truly intractable, and the country’s in-flow must exceed its out-go at some point, somehow.

The truth of the Laffer Curve, too, has asserted itself among the advanced and semi-advanced democracies: there is general agreement that marginal tax rates just get stupid and counterproductive at some level, and that those levels were routinely exceeded by Western governments in the 1960s and 1970s. Even the special odiousness of corporate taxation is recognized by pretty left-wing regimes now.

But there is still an ongoing argument over optimum progressivity in the tax structure, and the position taken by Ralph Klein’s Alberta was, against a global background, truly radical. The flat tax is fundamentally a moral, idealistic position: it is the assertion that the citizen is entitled to keep the same fraction of the millionth dollar he earns, at least once he passes the basic personal tax exemption, as that of the first. It makes our contribution to the state proportional to our income, but no more than proportional; it is, in an odd sort of way, a rejection of class distinctions—revolutionary egalité in a particularly bourgeois form.

Socialism was a dream found to be largely incompatible with the realities of the welfare state, and one cannot help wondering if flat taxation has not now been found to be the same sort of thing. If you cannot make a flat tax work in utilitarian, competitiveness-obsessed Alberta, where are you likely to?

Alberta taxation has not, of course, been ostensibly made very un-flat at all. The new personal income tax structure has only three brackets, and, on the plans expounded yesterday, will end up five years from now with only two: the existing 10% core rate, and a rate of 11.5% on taxable income above $100,000. But once you have given way on the principle of bracketing, further changes become much easier thereby. And they will be tempting, for this Alberta government is still covering the hole in its budget mostly through borrowing in the short term. Two classes of Albertan have been set against each other, and a rebound in oil prices would spare us the electoral gameplaying that logically must follow. But betting on such a salvation would be unwise, and is recommended by nothing in the arcana of the market.

Even more progressivity has been injected into the Alberta system of revenue-gathering. There is a “Health Care Contribution Levy” applying only to Albertans with taxable income over $50,000. The money goes into the general revenue, which is not to say that it would matter if the funds were somehow hypothetically earmarked and only used to pay for stethoscopes and X-ray machines. (Some sillier Albertans are complaining that the money “won’t go into health care,” as if the whole point of money wasn’t that dollars are freely substitutable for one another.) The health levy effectively creates another tax bracket, although, since the amounts stop rising in proportion to taxable income at a level of $130,000, it is also tantamount to a small break for the newly stigmatized rich at the high end. There are also new tax credits for lower-income families, so that is two new tax brackets, labelled “AFETC” and “AWFS,” on the poor side.

In short, Alberta’s taxation of incomes, if thought of as a chart of marginal tax rates moving up and down as income grows, will now have a complex, jagged shape more like that of other provinces in Confederation. One presumes, or fears, that this may ultimately make Alberta’s deep politics less distinctive.

Alberta, thanks to the resource-centricness of its economy, is a funny sort of place when it comes to class. In a typical neighbourhood the richest person is very likely to be the one who goes to work in a hard hat and overalls. Ph.D.-holders live next door to people with Grade 10 educations, envying them for retiring at the age of 45. The tug of upward mobility feels stronger, to me, than it did when I was a child; I am somewhat unusual in my social circle in having practised the same trade for most of my adult life and in identifying strongly with it. If I were a real Albertan, I almost feel, I would be doing something shrewd on the side like studying for an accounting credential.

In the last 10 years I’ve seen so many friends and relatives sucked suddenly upward on the income scale—even within the corporate environments that are often reputed to be lacking in adventuresomeness and sensitivity—because they were willing to have extra education paid for, or because they had an underexploited ability that someone spotted. I do not suppose that flat taxation had much to do with this per se, but flat taxation was a sort of collective vote for, even a pledge of faith in, this kind of world—as opposed to a world where at 20 you’re a fish canner and at 60 a slightly better-paid fish canner with nicer working conditions and excellent state-funded medical care. In Alberta, outside the public sector, labour unions are perhaps not so much seen as odious as they are totally pointless: there is always something else you can go do, isn’t there?