However, Trudeau says nothing about whether the training mission in Ukraine will be extended 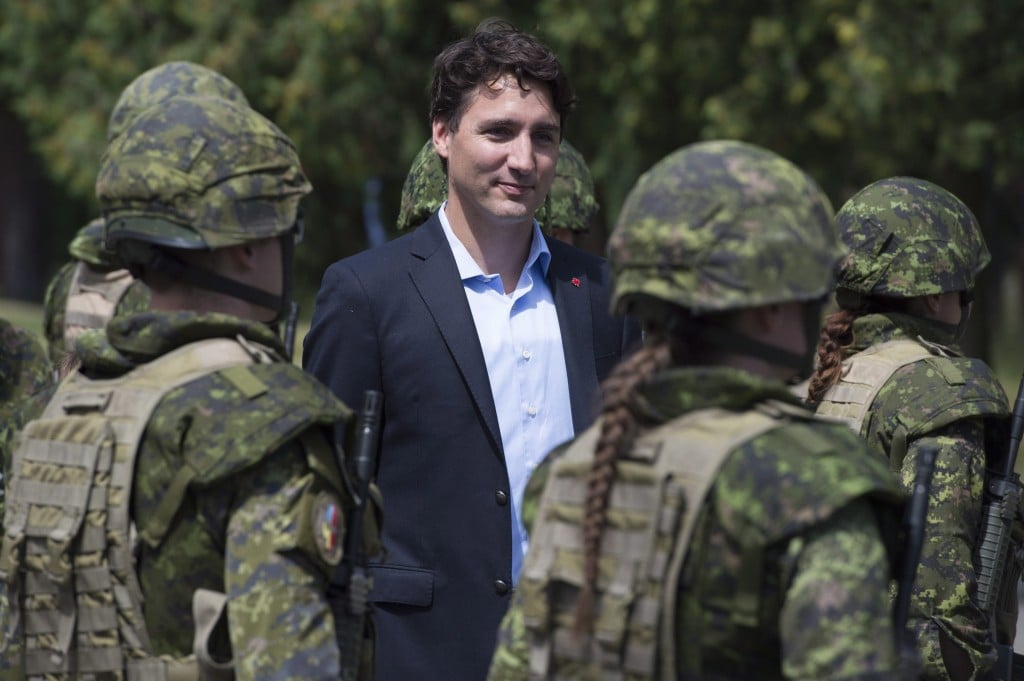 LVIV, Ukraine – Prime Minister Justin Trudeau thanked Canadian soldiers on Tuesday for their role in training the Ukrainian army, before getting a demonstration of their work firsthand.

Speaking to some of the 200 soldiers who have been based near the western city of Lviv since January, Trudeau emphasized the importance of continuing to support Ukraine in its struggle with Russia.

“It has been a long time since Canada had to defend our valour and defend our territory,” he said in French to the soldiers, who are members of the Valcartier-based Royal 22e Regiment, better known as the Van Doos. “But we need to continue to work with those who are fighting for democracy and their territorial integrity. It is essential.”

Trudeau didn’t say anything, however, about whether the training mission will be extended. It is due to end next March, though Ukrainian President Petro Poroshenko made a personal request to Trudeau on Monday to extend it.

The previous Conservative government sent the Canadian military trainers to Ukraine last year in response to Russia’s annexation of Crimea and support for separatist rebels in eastern Ukraine.

The Canadians, alongside British and American troops, have been teaching the Ukrainian army the basics of soldiering, such as how to use weapons and move as a unit, as well as more advanced skills such bomb disposal and medical training.

“You are really a source of extraordinary pride for all Canadians,” Trudeau said. “And this is an opportunity for me to thank you in person.”

After speaking to the troops, Trudeau was joined by his son Xavier and defence chief Gen. Jonathan Vance to watch a military exercise involving a group of Canadian and Ukrainian soldiers.

As the Trudeaus and Vance watched through binoculars, a Soviet-era armoured personnel carrier led the soldiers toward a wooden building. The air shook as its cannon fired several rounds in quick succession.

The troops then moved away from the vehicle and spread out in a line facing the building. Four Canadians followed close behind as the eight Ukrainians slowly closed on the building, firing all the way, before placing an explosive inside and setting it off.

The exercise was designed to show how Canadian troops have been helping bring the Ukrainians up to a level where they can push back against Russian-backed rebels in eastern Ukraine.

It came at the end of a six-day trip through Eastern Europe for Trudeau in which Russia loomed large.

Trudeau flies home from Lviv later today after having pledged troops to Latvia while attending the NATO summit in Poland, paying an emotional visit to the infamous Auschwitz-Birkenau concentration camp, and signing a free trade agreement in Ukraine’s capital, Kyiv.