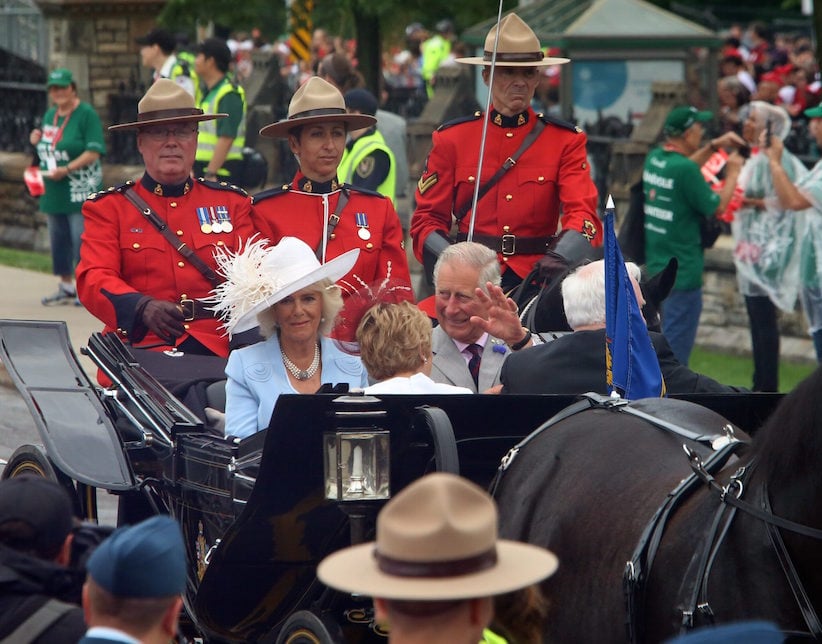 Camilla Duchess of Cornwall and Prince Charles wave to the crowd as they ride in a carriage during Canada 150 celebrations in Ottawa on Saturday, July 1, 2017. THE CANADIAN PRESS/ Fred Chartrand

OTTAWA – The newly invested Extraordinary Companion of the Order of Canada showered the country and its people with praise Saturday as Prince Charles helped to mark the 150th anniversary of Confederation — and to bid farewell to Gov. Gen. David Johnston.

The Governor General presented the prince with his insignia during an investiture ceremony at Rideau Hall after Charles began the day — the last of his visit to Canada with wife Camilla, the Duchess of Cornwall — by sitting down with Prime Minister Justin Trudeau.

Later in the day, Charles returned the favour as he acknowledged Johnston’s seven years as the Queen’s representative in Canada and thanked him for his service.

“I would like to say a special thank you on your behalf to the Governor General for his seven years of impeccable service as Her Majesty’s representative here in Canada,” Charles told thousands of revellers at Canada Day celebrations on Parliament Hill.

“He has earned great respect and gratitude as a modern nation-builder, whose commitment to the youth of Canada — and to reconciliation — is exemplary.”

Charles also paid tribute to Canada’s war dead, recounting his visit to Vimy Ridge earlier this year to mark the 100th anniversary of that devastating battle.

“It was a victory led by Canadians, driven by commitment to the power of freedom and democracy,” he said. “Thousands gave of themselves on those fields, far from their homes. That was a gift to all our futures, and one we must never forget.”

Charles, too, acknowledged the controversy shrouding the sesquicentennial celebrations, symbolized by a teepee erected on Parliament Hill as a reminder of the oppressive, colonial treatment of Indigenous Peoples throughout the country’s long history.

Canada, he said, is a celebrated champion of human rights, peacekeeping and diversity — “with, if I may say so, Canada’s commitment to reconciliation with Indigenous Peoples demonstrating a remarkable determination to forge an ever better society.”

Prior to the day’s celebrations, which saw about 25,000 people brave heavy rains to mark the occasion of Canada’s 150th birthday, Charles and Johnston inspected the ceremonial Guard of Honour together during a proceeding at Ottawa’s peacekeeping monument.

The royal couple also became the first visitors to the newly opened Canada History Hall at the Canadian Museum of History in Gatineau, Que., where they cut a ceremonial ribbon and met with the Alkhalaf family from Syria, now based in Peterborough, Ont.

After emerging from the new hall, Charles and Camilla entered the Grand Hall at the museum and met people lined up to shake their hands, including Amelie Labelle, a 17-year-old puppeteer dressed up in a red blazer, silver tights and red Converse shoes.

“It is really, really exciting,” Labelle said. “I didn’t expect to do that today.”

Nick and Kyla McCandie Glustien were also on hand to meet the royal couple with their kids Tristan and Adria.

“It is Canada’s 150th, so it is a once-in-a-lifetime opportunity to celebrate this fabulous country that we are so honoured to be a part of,” Kyla said.

The couple was also scheduled to visit the newly opened and renovated National Arts Centre for a ribbon-cutting with a number of guests, as well as stop in at Shopify, an Ottawa-based e-commerce company.

Finally, they were to attend the inauguration of the Queen’s entrance at Rideau Hall to wrap up their three-day visit.