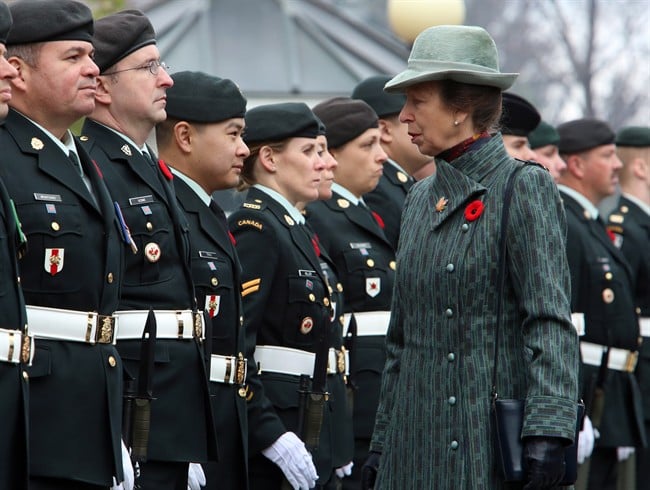 OTTAWA – Princess Anne, the only daughter of the Queen and Prince Philip, arrived in Ottawa on Monday for what is expected to be a largely sombre, two-day visit.

When the visit was announced in September, it was billed as a celebration of everyday heroes, including veteran police officers and aboriginal youth. It took on new meaning after the deaths last month of two Canadian soldiers in terror-related incidents.

“I think we especially remember the two servicemen, Warrant Officer Patrice Vincent and Cpl. Nathan Cirillo, who were recently killed in the service of their country,” the Princess Royal said as she was welcomed at Rideau Hall.

“And we will always honour the sacrifice they made on behalf of us all.”

Vincent, 53, was struck and killed by a vehicle on Oct. 20 in parking lot in St-Jean-sur-Richelieu, Que.

Security officials later described the incident as an attack by a violent extremist.

The lone gunman, Michael Zehaf-Bibeau, was killed shortly afterward as he shot his way into Parliament Hill’s Centre Block.

Her Royal Highness and her husband Vice Admiral Sir Tim Laurence arrived at the Ottawa airport shortly after noon.

Both will attend the National Remembrance Day service and take part in a ceremony to rededicate the war memorial.

Princess Anne noted that her grandparents, King George VI and Queen Elizabeth, attended at the original dedication ceremony for the monument in May, 1939.

“As we stand on the verge of the monument’s rededication, I am mindful of this continuum of history and the privilege given us as members of the Canadian Royal Family to share such important moments with you all,” the princess said before inspecting a royal guard.

Anne was welcomed to Rideau Hall by Gov. Gen. David Johnston, who said the visit is a fitting tribute to Canada’s military.

“You are a true friend to Canada and we are delighted to have this opportunity once again to showcase what our country has to offer,” said Johnston.

Following her arrival, the princess’s itinerary for Monday included visits to the National Military Cemetery, the National Police College and the British High Commission and a meeting with this year’s Silver Cross Mother, Gisele Michaud, whose youngest son died of injuries suffered in Afghanistan.

Master Cpl. Charles-Philippe Michaud was wounded after stepping on an improvised explosive device while on patrol near Kandahar City in 2009.

The 28-year-old died less than two weeks later at a hospital in Quebec City.

Calling it an “all-too-short tour,” Heritage Minister Shelly Glover also welcomed Princess Anne on her seventh official visit to Canada, thanking her for paying tribute to the heroism of everyday Canadians.

“We thank you for highlighting and sharing this core Canadian value,” said Glover.

Known for her equestrian talents — she was the first member of the Royal Family to compete at the Olympics — and her charitable work, Princess Anne is the patron of over 200 organizations.