Philippe J. Fournier: As of this moment, Blaine Higgs's PCs are projected to win an average of 28 seats to the Liberals 17. The Greens are solidly in third place. 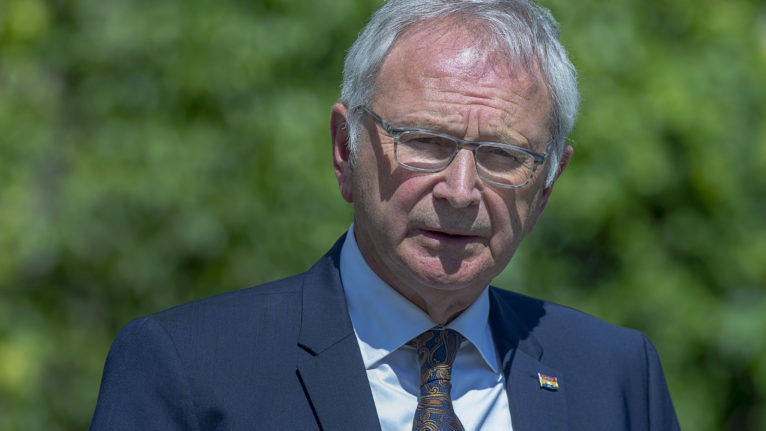 As we pass the halfway mark of the 2020 New Brunswick provincial election campaign, Premier Blaine Higgs and the New Brunswick Progressive Conservative Party lead voting intentions, according to a new Mainstreet Research poll commissioned by 338Canada. Moreover, this poll also indicates that Green Party is on the rise and could potentially muddy the waters in the weeks ahead.

The Mainstreet poll was in the field on August 27, and asked 700 New Brunswick voters: “If a provincial election were held today, who would you vote for?” Here are the results from decided respondents: 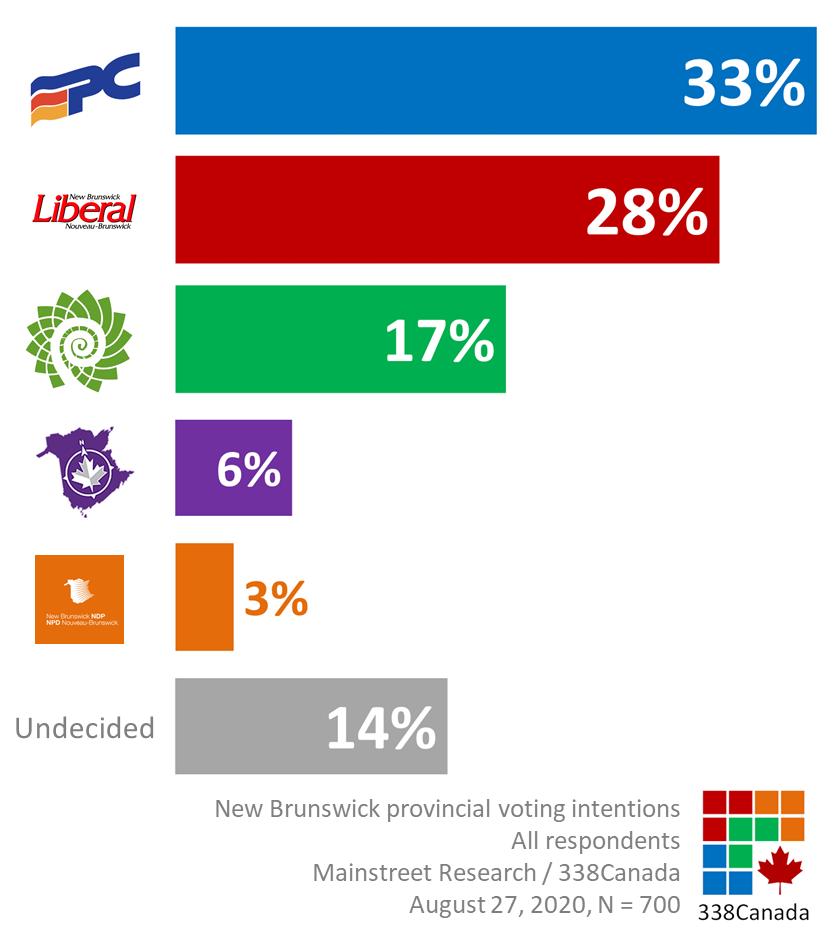 One-third of all respondents answered they intended to vote for Blaine Higgs’ PC party. The NB Liberals stand in second place, five points behind the PC party, with 28 per cent of decided voters. The New Brunswick Green Party, which won 12 per cent of the popular vote and three seats in the 2018 general election, gets the support of 17 per cent of all respondents.

The People’s Alliance of New Brunswick, which held three seats and the balance of power until dissolution, gets six per cent. We must note that the PANB will only field candidates in 37 of the province’s 49 electoral districts. Ten of 12 districts without PANB candidates are located in northern New Brunswick.* 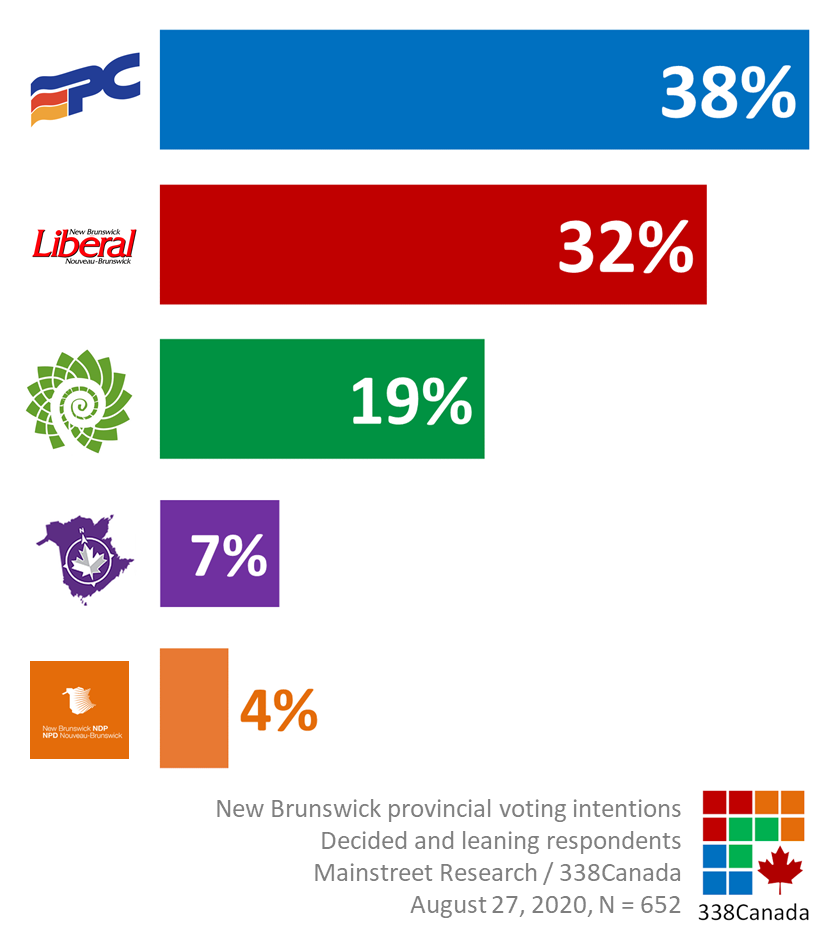 Among decided and leaning voters, the PC party has the support of 38 per cent of respondents, a six-point lead over the Liberals. The Green Party stands in third place with 19 per cent—a level of support which could potentially mean net seat gains for the Greens compared to 2018. Naturally, one must use caution when using regional sub-samples, because the margin of error of the data grows as the samples shrinks, but Mainstreet measures a tight race between the PC party and Liberals in Moncton (38 per cent a piece).  In the capital region of Fredericton, the race is solely between the Progressive Conservatives (42 per cent) and the Greens (32 per cent).

In northern New Brunswick (Northwest, Restigouche, Chaleur Peninsula) where most of the province’s francophone population lives, the Liberals dominate the field with 61 per cent of voting intentions and could repeat their 2018 near-complete sweep of the region. In a Léger poll published Saturday in Acadie Nouvelle, the Liberals were the preferred party among francophones with 58 per cent. 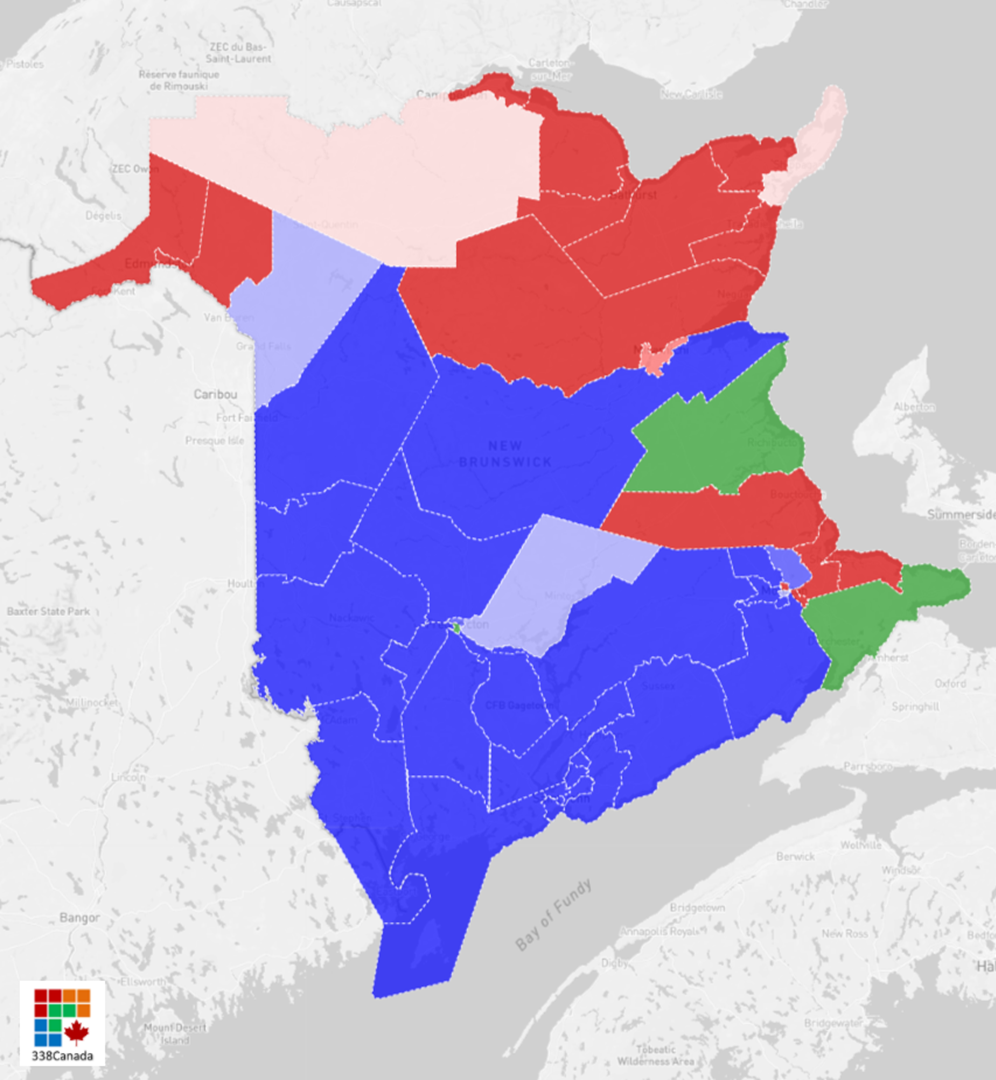 We should also stress that the Greens, should they improve their popular vote share into the high teens or even low 20s, could potentially double their 2018 total of three seats and hold the balance of power in a PC-led government. However, we do need more numbers to confirm whether the Greens are indeed on the rise in New Brunswick.

We will continue to track the New Brunswick numbers until election day on Sept. 14. For a complete breakdown of this projection, visit the 338Canada New Brunswick page.

This poll was conducted by Mainstreet Research for 338Canada. It was in the field on August 27, 2020 and collected voting intentions from 700 New Brunswick voters. The poll’s margin of error is 3.7%, 19 times out of 20. Here is the complete poll report from Mainstreet.

CORRECTION, Aug. 31, 2020: An earlier version of this post incorrectly stated that all 12 districts with no People’s Alliance of New Brunswick candidates were in northern New Brunswick. In fact, 10 of 12 ridings with no PANB candidates are in that region.