After leading his NDP to its first defeat in the province since 1999, Greg Selinger resigns as leader 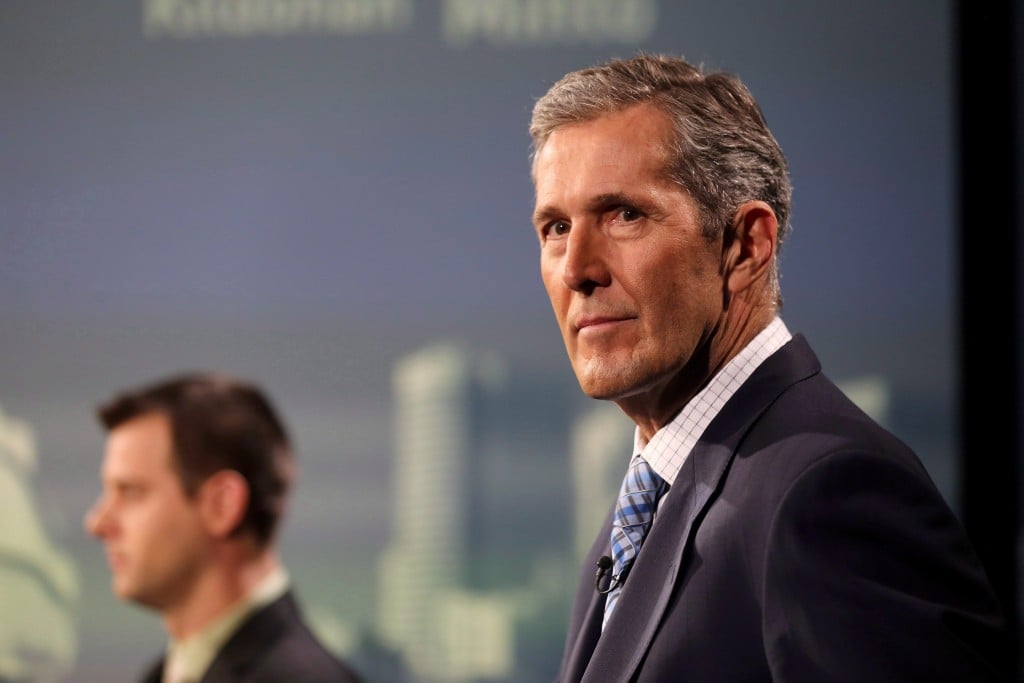 Manitoba changed governments for the first time this century on Tuesday as voters painted the political landscape a solid hue of Tory blue.

Brian Pallister’s Progressive Conservatives routed Premier Greg Selinger and the NDP to put an end to 16 years of orange power.

It also marked the demise of Selinger as leader.

“Tonight, as we examine the results, I will and I have already, talked to the president of the party and I’ve offered my resignation,” Selinger told party supporters.

“I do take responsibility for the election outcome. I will recommend they appoint an interim leader after tonight as we go forward.”

It was a bad night for the New Democrats. Not only did they fail to win a fifth consecutive majority, they were looking to win about 15 seats — the worst showing since they won 12 in 1988.

The party’s percentage of the popular vote fell to the mid-20s, about half of what it was in the last election in 2011.

The Tory popular vote was over 50 per cent.

The defeat is another blow to the NDP in Canada. The federal New Democrats were reduced to third-party status in October’s federal election and Premier Rachel Notley is the last NDP premier in the country.

Pallister, a former Canadian Alliance MP, joins Premier Brad Wall of Saskatchewan as another voice of conservatism on the Prairies. Pallister won his seat in the Winnipeg constituency of Fort Whyte.

“I think we were fighting a lot of (desire for) change,” he said. “We went into this campaign knowing that we were running from behind.”

Steven Fletcher, a former federal Conservative MP, will be one of the new PC members of the legislature after winning in Assiniboia.

The Liberals doubled their seat count to two: incumbent Jon Gerrard and newcomer Cindy Lamoureux. They were in a tight battle in a third, but Liberal Leader Rana Bokhari failed to win in Fort Rouge. The party was hoping for four seats to gain official party status.

Bokhari lost to NDPer Wab Kinew, an author, former broadcaster and rapper who had to defend himself during the campaign for misogynistic and homophobic language in his rap lyrics.

The PCs swept the southern rural seats, their traditional base of support, and won by capturing a majority of seats in the traditional NDP stronghold of Winnipeg.

Pallister, 61, rode to victory on a promise to build infrastructure, increase trade and reverse a sales tax hike that many believe doomed Selinger and his NDP when they broke a promise and introduced it in 2013.

The decision prompted a number of Selinger’s cabinet ministers to revolt and forced a leadership contest last year that he barely survived.

During the campaign, Pallister hammered on the broken promise of the tax hike, which took the levy seven per cent to eight per cent.

Political scientist Karine Levasseur said the tax hike decision sent Selinger into a spiral from which there was no recovery.

“That decision has haunted Greg Selinger and has produced public opinion poll after poll where support has been declining, and with that declining support, that then sparked a very deep internal leadership crisis within the New Democratic Party,” said Levasseur with the University of Manitoba.

“They kind of sat back almost. They kept repeating the mantra about broken trust and broken promises for sure, but they kind of let the NDP unravel themselves.”

Pallister ran on promises to invest in infrastructure, but also reduce the provincial sales tax to seven per cent from eight. He has said the PCs will raise income tax brackets with inflation and join the New West Partnership trade agreement with other western province

The election capped a five-week campaign that often seemed nasty and personal.

Last week, Selinger called Pallister “homophobic” for voting against a law in 2013 that requires schools to allow gay-straight alliances set up by students.

Pallister was also on the defensive over a vacation home in Costa Rica and the amount of time he has spent there.

The Tories and then-premier Gary Filmon lost power to Gary Doer and the NDP in 1999 and had been the official Opposition ever since.