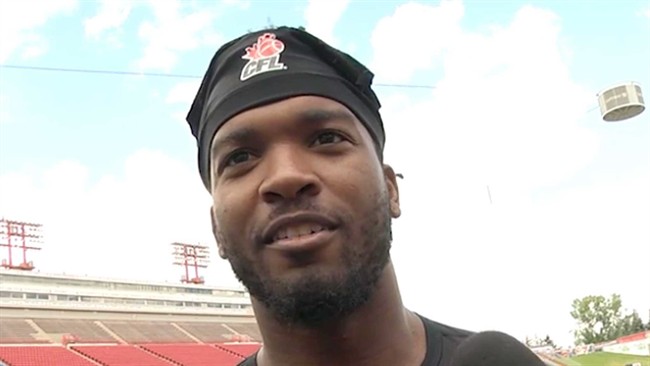 DETROIT – The sister of slain Calgary Stampeder Mylan Hicks says he was “pure love” and the 23-year-old was trying to be a peacemaker before he was shot outside a Calgary nightclub early Sunday.

Hicks and some of his teammates were at the Marquee Beer Market and Stage celebrating the Stampeders’ win Saturday night against the Winnipeg Blue Bombers. Police say there was a fight inside the club that later continued and escalated in the parking lot, where Hicks was shot.

“The guy was in there causing havoc and from what I understand my brother was the one that tried to defuse the situation and tried to calm him down — ‘Hey man, it’s going to be all right, let me buy you a round,'” Jazzmine Fowlkes said Wednesday in an interview from Detroit.

Fowlkes, 29, said she and her brother were close. He often acted as her “little big brother,” imparting advice and looking after her.

Hicks was a doting uncle to her two sons Kaiden and Carter, who are three and two years old, she said.

“He loved my babies. Those were his world,” Fowlkes said.

Fowlkes said she thought her brother would be safer from violence in Canada than he had been in Detroit.

She was the first in the family to get the news that he’d been shot.

“I can’t begin to describe the type of agony and pain I felt all through my body. All I could do was scream and holler,” she said.

Fowlkes said she talked to her brother on the phone a day earlier.

“I asked him when he was coming home and he said in December and I couldn’t wait. I was looking forward to it because I love my brother.”

Members of the Calgary Stampeders were still reeling over Hicks’s death at practice Tuesday and were looking forward to meeting Hicks’s family.

“We’re going to get together with the parents — tell some stories, share some memories. We definitely need closure as well. We need to heal,” said Stampeders head coach Dave Dickenson.

“It’s a pretty big family actually and the mom has a tragic story earlier in her life as well. You feel for them.”

A 2013 profile of Hicks’s mother, Renee Hill, on community website My Grandmont Rosedale says she moved into the Detroit neighbourhood nearly three decades ago as a single mom shortly after her husband was killed in a robbery.

Stamps defensive back Jamar Wall will wear Hicks’s number 31 jersey in this weekend’s game in Hamilton.

“I just want to shake his mother’s hand,” said Wall.