Putting the 'limp' in Olympics: Calgary's 2026 bid lives on, but for what, exactly?

City council chose Monday against euthanizing the bid, but there is not much of a 'Yes' side left eager to lose money and get hosed by the IOC 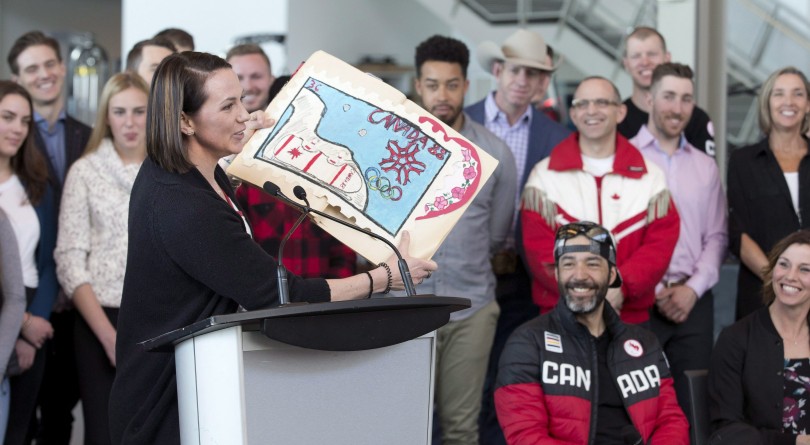 Former Olympic bobsledder Helen Upperton speaks and shows a poster that she made as a child for the 1988 Calgary winter games as athletes hold a press conference to encourage the city of Calgary to continue a Winter Olympic bid for 2026 in Calgary, Alta. on Friday, Apr. 13, 2018. (THE CANADIAN PRESS/Larry MacDougal)

A few days before Calgary city council voted on Monday to keep Calgary’s 2026 Olympic bid plodding forward, a poll showing a slight majority of local support showed that young Calgarians are more prone to back another bid than older residents.

This was, at first, surprising, as it appeared when this debate began two years ago that the support base for another Winter Games bid would be the baby boomers who were nostalgic for the 1988 Winter Olympics, with the basement trunks of ’88 Sun Ice jackets and gas station collectible glasses to prove it.

It turns out, however, that the enthusiasts of three decades ago have aged into the cynical, recession-wary taxpayers of today that aren’t as keen to pursue the five-ring circus as much as those who are younger and probably newer to Calgary, for whom a Games would be novel (as an exhilarating two-week stretch of fun that every generation of Calgarian deserves to experience).

Thus far, the skeptics have been the much louder and more ardent faction on both ends of the political spectrum, which bodes ill for when the bid proposal goes to civic plebiscite, either in late 2018 or early 2019. A referendum was a condition for the Alberta NDP government, and local politicians had touted a public vote as a way to kill it—until it seemed in recent days the dream may die by simple council vote, at which point the believers pleaded to let the idea live long enough to let residents render their verdict. (The believers won at council, but not by much: nine votes to six.)

The “No” side is shaping up to be an awkward consortium of right-wingers who deplore using taxpayers’ money on Olympic baubles and the lefties who deplore pledging scarce funds to one-off events and getting into bed with the monolithic and corruption-prone International Olympic Committee.

There isn’t much of a “Yes” side. Mayor Naheed Nenshi, who personally loves the Olympics, is putative leader of the Agnostics who like the potential but are wary the public gets hosed in a deal with the IOC; most of his council chose to argue Monday against euthanizing the bid, rather than for anything in particular.

And the clamour of public lobbying from athletic and business groups to keep alive a Calgary 2026 bid alive has been… well… suffice to say it’s not going to be stitched together to create modernized verses of “Can’t You Feel It”, David Foster’s so-very-1988 anthem of the original Calgary Olympics.

“We’re going to continue to be involved so that work is done, and when it is done, we’ll react to it and see what it is,” former Olympic luger Jeff Christie gushed (well, OK, that’s not gushing) after Calgary city council’s vote Monday.

“Even if there are understandable concerns about undertaking such a project, we’re having a conversation well worth having,” Canadian Olympic Committee president Tricia Smith said in a statement.

“Cutting the process short at this time would be counter-productive to good public debate,” said the Calgary Chamber of Commerce.

And there’s this mighty vote of support for the Games and International Olympic Committee from Seyi Smith, a Pyeongchang bobsledder and Summer Games sprinting medalist: “I hope we’ve created a system that stamps out corruption and sweetheart deals.”

That’s about the closest thing to enthusiastic public cheerleading Calgary gets after nearly two years of public planning to bid for a Calgary 2026.

The pom-poms also come out when bid supporters talk rosily about extending Calgary’s stature as an amateur winter sports capital, and the potential to leverage hard-to-get federal and provincial dollars to maintain Calgary’s existing skate and ski facilities, plus build a new fieldhouse. It’s tough to convert all this into a winning argument for a $4.6-billion (at least) hosting opportunity: Extend! Leverage! Maintain! is a crummy stand-in motto for the Olymics’ citius, altius, forties (faster, higher, stronger).

The IOC has begun encouraging Olympic bid cities to employ reused, refurbished and pop-up sports venues in hopes of preventing another Sochi-style $50-billion excess or a landscape of useless stadiums. To keep Calgary’s potential costs down to a mere $4.6 billion, bid leaders have hived off much of the civic ambition—who needs a new arena when the one old Saddledome will do, and we can survive just fine without an airport rail link, and maybe we can farm out the curling competition to Edmonton and the ski jumping to Whistler, B.C. This has created a Calgary Olympic paradox: organizers genuflect to the gods of fiscal responsibility by making sacrifices of infrastructure legacy.

Consider that when Vancouver put its 2010 Olympic bid to a plebiscite in 2003, there were ample goodies to offer the public, including the Canada Line train to the airport and finally twinning the Sea-to-Sky Highway to Whistler. Calgary’s bid has no such lure. For the Vancouver Games vote, the “Yes” campaign included both the progressive mayor Larry Campbell and centre-right Liberal premier Gordon Campbell, and they prevailed over naysayers with 64 per cent.

NDP Premier Rachel Notley does want to woo Calgary voters but also wants to not appear too spendthrift, so she can’t be counted on as a diehard Olympics supporter; Nenshi has suggested he’s loath to put his thumb on the scales as Calgarians decide, but that could change if the IOC sweetens the deal in coming financial talks with the bid team.

Nenshi encouraged Calgarians to be circumspect about a bad deal when the Calgary Flames organization proposed a joint venture to build a new pro-sports arena, where the city was asked to carry much of the cost burden. He’s now urging Calgarians to have faith in a multimillion-dollar dalliance with a different set of sports plutocrats.

At least if Calgarians toss in a few hundred mil’ at the Flames, they know they end up with a snazzy new hockey and concerts facility that’s not shaped like a saddle. Going all in on the Olympics gets the city two weeks of glory and… maybe somebody can do a better job of explaining.