Caroline Mulroney on why she's running and what's wrong in Ontario

The leadership candidate for the Ontario PC party talks about winning, her life in politics and getting advice from her father, Brian Mulroney 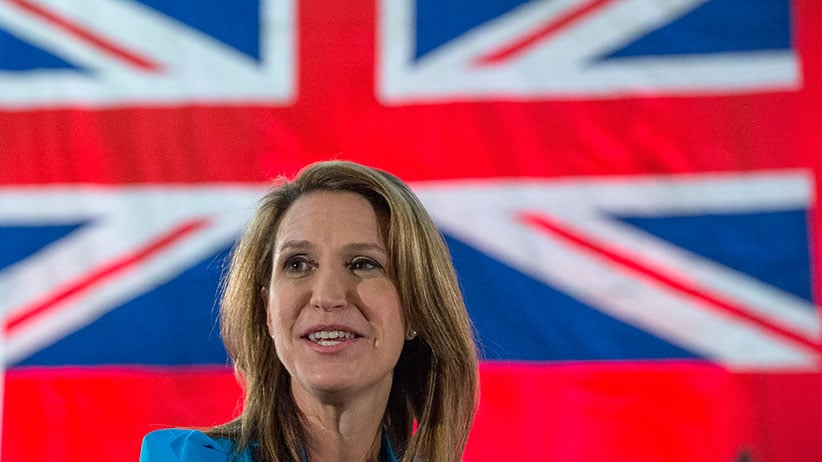 Caroline Mulroney at a town hall event in North York. Mulroney is officially in the race for the leadership of the Ontario PC Party. (Rick Madonik/Toronto Star via Getty Images)

It’s been a tumultuous few weeks in Ontario politics. The fall of Progressive Conservative Party leader Patrick Brown—who was forced to resign amid allegations of sexual misconduct—has prompted a lightening-fast leadership race to be held before the June 7 provincial election. So far, three candidates have stepped forward to replace Brown; Christine Elliott, Doug Ford and political newcomer Caroline Mulroney, daughter of former Prime Minister Brian Mulroney. Although she lacks political experience, Mulroney has a formidable resume in her own right; she’s a lawyer and businesswoman who graduated from Harvard and New York University’s law school. She took a leave from her job as the vice president of investment firm BloombergSen Inc. last year to become a candidate for the riding of York-Simcoe. She spoke with Jen Gerson for Maclean’s.

Q: Why are you doing this?

A: I’m doing it because we need change in Ontario. The more I knock on doors, the more I hear from people that they’re angry. We need to deliver change in Ontario, and I’m running because I’m the only person who can defeat Kathleen Wynne.

Q: How do you respond to people who say that you lack political experience?

A: Kathleen Wynne has a lot of political experience and it’s what got us into this mess in the first place. I have worked on Wall Street and on Bay Street. I started a charity and I’ve been doing it while raising four children. And I think that’s the kind of experience people want to see from their political leaders. It’s real life experience.

Q: For you to go from candidate to party leader to potentially the premier of the province in the span of only a few months, that’s an extraordinary career arc in politics. Are you confident that you can pull this off?

A: Well I wouldn’t have put my name forward if I wasn’t confident that I could do this. I’ve worked hard my whole life. I have been working as a candidate, as a member of this party, as a member of this team and I am definitely ready. I mean, I’m not going to say it’s not unprecedented, this timetable. We can see victory.

Q: Was there a specific moment or a specific policy that connected with you that made you make (the decision to run)?

A: There wasn’t a specific policy: When I realized that the debt had doubled and that our interest expense is the third largest line item on the Ontario budget. You’ve got $12 billion that we’re spending a year to service our debt. I thought that this has to stop. We can’t just keep adding debt and continue spending in the way we’ve been spending.

Q: Obviously you have a unique background being the daughter of Brian Mulroney.  Did that make you more inclined toward a political career or less inclined?

A: If you grow up and your mother or father is a doctor you talk about medicine at the dinner table. In our case we talked about politics at the dinner table. I also met a lot of people when we were in Ottawa, people that I saw doing great things. I really admired the people who got involved in politics. I thought they were trying to make change in their communities and our country. I always thought it was a great profession. So certainly in the back of my mind growing up it was something that I always thought I’d do and that’s why I ended up doing it.

Q: It seems like you’re sort of following in the path of your father, not only in your decision to go toward politics but also in your ideology.  Was that always the case or was that an evolution?

A: My father had a great legacy and implemented important policies for Canada. And so I got to see the politics in that case. I’ve always been a conservative because I believe that government’s not always the solution. You’ve got to empower people to make the best decisions for themselves. I learned it from my family but I also learned it from the party, and from my own education.

Q: So you didn’t have an NDP phase at the dinner table?

A: No, I didn’t really have an NDP phase, sorry.

Q: Because that would have been kind of funny. There are going to be people who try to characterize you in this race as being another prime minister’s kid. How are you going to respond to that kind of criticism?

A: Because of my last name I know people want to create a narrative around it, but I was 19 years old when my father left office 25 years ago. I’ve spent my life studying and working and following my own career and developing my own career. Just like most people, your parents have a big influence on who you are as a person, but I’m my own person. I’m a mother. I’ve been working hard. I have a career. I’m a businesswoman. I’m much more than just a prime minister’s daughter.

Q: Did your father at all try to talk you out of running?

A: No, my father wants me to do what I want to do and he’s always encouraged me to make my own decisions and pursue my own ambitions and dreams.  His advice when I told him that I was going to put my name forward to be a candidate for the party was not what people would expect. He said: ‘your riding is big, drive safe.’

Q:  Right now you’re in a leadership race where you have two women as frontrunners in a race that will eventually square off against a female premier and a female opposition leader. Do you think that is going to be an important moment for politics in Canada?

A: I think it’s going to be a great moment for politics in Canada. As someone who has always watched politics, enjoyed participating in politics in my life, and as a mother of daughters, I want to see as many women represented in politics as possible.

Q: Do you think this might be the moment when gender ceases to be a defining issue in the race?

A: I think for the women who are there it’s about who’s the right candidate, the right leader. And I think that each woman will be speaking to her experience and her qualities and what makes her the best candidate for the job. I hope we get to a point where other people are looking at us and not just thinking about our gender. Given how much conversation is going on right now about how we need a woman leader, I don’t know that we’re there yet.

Q: I’m here in Alberta and, of course, we have Rachel Notley as premier and one of the things that I’ve been startled by is just how rough a ride women can get in politics. It can get very nasty. It gets very personal and some of the commentary and backlash can get very sexualized. Is that something that you’re prepared for?

A: As I grew up a political child I got used to not really paying attention to what people say because no matter what you do you’re not going to be able to please everybody. I’ve met in my life some amazing women in politics who have been there for me since I started this journey and continue to be there for me. Lisa Raitt’s been a great friend and so I know that if things get a little rough I’ve got a network of great, strong female leaders who have been in the political trenches who can advise me as I need.

Q: Have they given you any good advice getting into this?

Q: Yes, that’s good advice.  That’s excellent advice. Do you have any strategic advantages as a woman, here?

A: Everyone is out there working hard trying to get ahead and, so it’s not a gender-based issue. I don’t know if a woman can speak to that better than others. I think that I’ve got an opportunity to speak to a broad group of Ontarians because I’m a new face. I’m a new generation in politics and I think that that’s what people are really looking for in Queen’s Park, a new way of doing things.

Correction: The original version of this story gave an incorrect date for the Ontario election. It is to be held on June 7.