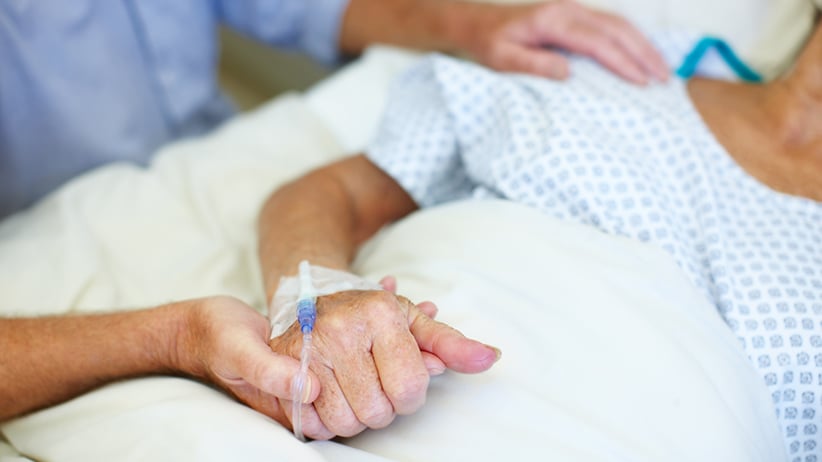 Closeup shot of an elderly man holding his wife’s hand while she is ill in the hospital. (Squaredpixels/Getty Images)

Stefanie Green, a family physician in Victoria, is a vocal supporter and provider of medical assistance in dying (commonly called MAID). She recently founded the Canadian Association of MAID Assessors and Providers, a nascent organization intended to provide support and information for Canadian doctors navigating this new territory. Maclean’s spoke to Green about why her organization is necessary, what they hope to accomplish and her own experience helping patients to die.

Q: How did your organization start?

A: Back in the spring of 2016, right before the law changed, there was a euthanasia conference in Amsterdam. A number of us from B.C. went, expecting to see many Canadians there, and to our surprise, there weren’t others there. But we were a core group of about six of us and we came back better prepared, more educated, ready to take this on and do this work.

We created a small email group to help support each other as we started this work, because there’s lots of obstacles in the beginning and lots of unknowns. We found very quickly that support was essential and we were really able to help each other.

I went to a conference in the fall in Vancouver that the Canadian Medical Association ran and I started talking to other colleagues. Everybody was very keen on it, so very soon after, I set up this list. But the group of us in B.C. were still talking about the work that needed to be done cross-country. I had a little bit of free time this fall, so I decided it’s time to actually do it.

Q: What kind of support and knowledge do physicians need as they try to figure this out?

A: Back in the beginning, what we really needed was just a sounding board of colleagues who understood the work we were doing. Nobody in this country had done this. So when you go to assess a patient for the first time, you feel like, ‘Okay, I’ve learned from my colleagues, I’ve read as much as I can, I’ve spoken to people who do this in other jurisdictions. How do I interpret the law? How do I interpret what the college said to me? Did I do this well enough?’ You say to your colleague: ‘This is what I did. Does that sound like I did that right?’ We literally taught each other and supported each other.

That quickly changed, because then after you’ve done two or three assessments and one or two procedures, all of a sudden, you’ve done it and you have a different perspective. You have a much more mature idea of how to do that assessment and who to bring in to get a second opinion, and what’s the best way to approach the family member if they’re not comfortable.

Since we’ve had the national listserv going—I started that before CAMAP was in existence—that group has quickly found its voice in supporting each other. It’s a secure and safe setting where we feel that we can ask each other’s opinions and thoughts honestly. There’s a lot of discussion on interpreting the law. We do some compare-and-contrast, and we help connect people in areas where there hasn’t been a lot of assessors or providers. That’s really, really helpful when people start out.

There’s the old saying in med school: ‘See one, do one, teach one.’ In the old days, that’s how we learned things. We’re happy to help provide that kind of connection to our members as they step forward.

Q: It seems we have really dropped this in the laps of physicians and said, ‘Okay, figure it out.’

A: I tend to agree, but I have to say, physicians do this all the time. I don’t mean starting from scratch, but we are in such a privileged position with our patients. I’m a family doc by training, and a lot of people in this field are family docs, and when we sit in a room with a patient, they put their trust in us for many, many things. It can be as small as the rash on their hand, but it often is life-altering questions and thoughts. So it’s not a foreign concept that we’re talking on a very intimate, emotional level with the patient. We evaluate capacity all the time in our work, and we talk end-of-life issues. We do have the skills, so it’s not totally crazy, but it is new.

Q: What are your personal experiences with MAID?

A: I don’t run a general practice right now, so people that I see for MAID have been either referred to me from their doctors or they’ve self-referred. At the beginning, I was one of the very, very few who was willing to put my name out publicly, and by being willing to speak on the radio and to the print media, my name was heard.

I have to tell you that it’s been amazing work. It’s absolutely incredible. It’s a bit humbling, it’s a bit awing. People are incredibly strong. I’ve been really impressed with the gratitude I have received from families and patients.

A significant proportion of the people I see have been terminal cancer patients, people who have been suffering for months or years. They’re usually at the very end of their fight—not always, but usually. There’s a real sense of empowerment and relief in being able to make a decision. It’s maybe the first time in months or years that they feel they have some sense of control of anything with respect to their illness. They are usually visibly relieved or thankful that I’ve walked in the room to have this discussion with them.

I don’t use euphemisms or talk about flying over meadows—when I talk about someone’s death, I talk about their death. They are so grateful to have someone in the medical field be able to do that with them.

Q: Did it take any amount of bravery to put up your hand and be outspoken about this? I know some physicians are reluctant because it’s seen as so sensitive.

A: In the beginning especially, it was unclear what kind of feedback would come to me if I put my name out. We all have private lives and families, we don’t want to put anyone in any sort of awkward position or risk. I did think about it and discuss it with my family—but I didn’t think too long, because this is a topic that I really believe the vast majority of Canadians support.

I also believe that MAID is absolutely on the spectrum of care that physicians should be offering, and I’m so proud that Canada has stepped forward to legalize and promote it and offer it. I think it is good care—good medical care—and it’s one more option for people at the end of their life.

Q: How many people do you have involved, either as members of CAMAP or on the email list?

A: I don’t want those numbers out there because they’re changing daily.

Q: Are we talking dozens or hundreds?

A: We’re not at hundreds yet. We’re dozens. The email list, that is exclusive for providers. Unless you’ve already provided MAID, you’re not on that list. It’s a much smaller group.

Q: So what about people who will be looking at providing it and want to learn?

A: They’re not on the list yet, but they are welcome and encouraged to join CAMAP and we will of course support them in any way we can. Some of those people are just looking for training, some of them are looking for mentorship, some of them are just looking to be involved. Once they have provided (MAID), they will be welcomed with open arms onto the list. But there has to be a sense of security among people on that list that this is exclusive to providers.

Support is number one. I’m going to establish a network among us so we can confer with each other. Number two, I’m going to work on education. I’m going to run this conference in June, and as far as I know, it will be the first MAID conference in Canada since the law changed. At this point, I think we’ve decided to mostly focus on the educational needs of the assessors and providers—establishing the expertise, going over what constitutes proper capacity to make these decisions, how do you do a robust assessment, the practical work of providing, what has worked in one province and what hasn’t worked in another; there’s different drug protocols in different provinces.

Q: Is there anything else you want to add?

But as we do the work and truly grow the expertise, we have an evolving sense of what this work is and what it means and how to interpret the law. If I have a group of physicians fifty wide across the country who agree on a certain term in the law and we’ve been working under this and supported each other in it and pulled people who are outliers into it and dragged people who are too resistant up to it, and we’ve developed this idea and it’s working and we all agree on it, in my understanding, that is the medical standard.