Quebec is more fearful about the future—with good reason 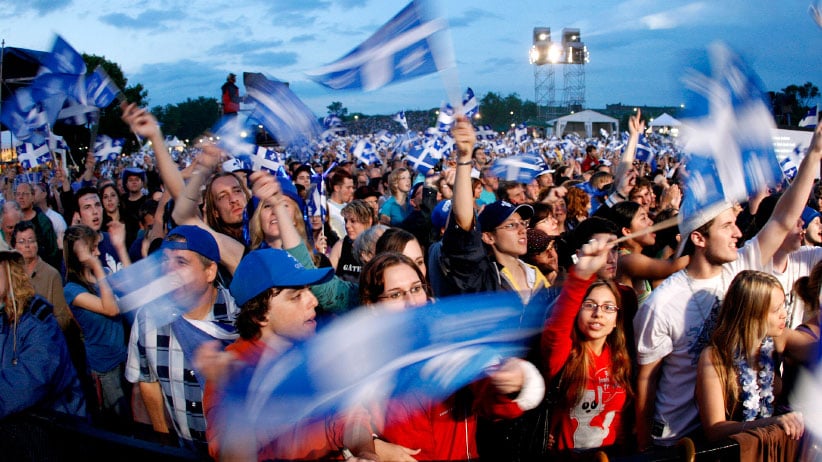 People celebrate the St-Jean Baptiste on the Plains of Abraham in Quebec City. The day is designated as a national holiday in Quebec province. (Mathieu Belanger/CP)

Can it be? There is an astonishing degree of like-mindedness in our Canada Project survey of 1,515 Canadians. Affinities abound in family and children, sports and country, entertainment and fashion, food and drink, money, lifestyle and even the fearsome “Canadian values” department. And this, not only between English-speaking provinces, but between Quebec and the ROC. Who nous?

Of course, someone itching for a fight could always make something out of the “What would you miss most from this country?” question. In every region, save Quebec, respondents pine for “our people.” In La Belle Province, food is what makes us yearn for home. A sure sign of hedonism gone awry, a nitpicker might say. Or just too many good French restaurants? But, otherwise, let it be known, we feel the same about not paying more taxes, affordable housing, patriotism, homosexuality, Facebook, having kids, homemade meals and (drumroll) being the nicest people on Earth. We share the same guilt about what we’ve done to Indigenous people and the same laissez-faire attitude toward the environment. We are equally confused about what to do about Syrian refugees and quite clear about letting people die with dignity. Even bilingualism, an age-old bone of contention, is now seen rather warmly from coast to coast.

But enough with all this harmony. Canada would not be Canada, especially 150 years down the rocky road of Confederation, without some kind of fundamental discrepancy between Quebecers and Canucks. While I do not think we are a meaner, more selfish and more corrupt kind of place, I do think—and the survey does point in this direction—that Quebec as a whole is a more fearful one.

The telltale question here is “What do you worry about most when it comes to your kids’ future?” Most everywhere in Canada, the number-one concern is “the availability of a good-paying, secure job.” There is notable anxiety in this regard in places where jobs are scarce (Saskatchewan and Manitoba) and where immigrant populations are high (Ontario). In Quebec, however, the number-one fear is “international conflict and extremism.” The fear in this case is associated with the outside, rather than the inside. Quebec also stands out when it comes to increasing the size of the military, increasing border security and decreasing the number of Syrian refugees. Still more signs that Quebec wants protection from external forces.

What does it mean? Let’s first of all resist the temptation to interpret this as proof of an anti-immigrant bias in Quebec. Now that we know how incredibly keen Canadians are to “screen new immigrants for Canadian values”—a whopping 84 per cent!—it would be unfair to single any of us out as being especially immigrant-shy. The fact is we are all a little worried about losing something of ourselves in the ethnic mix. Only, the rest of Canada has tended to keep this information to themselves while Quebecers have worried about being wiped out as far back as the Plains of Abraham, and express this anxiety at every turn.

“We are like a cube of sugar beside a gallon of coffee,” as novelist Yves Beauchemin once put it, describing Quebec’s situation within North America. Perhaps a tad alarmist, but the metaphor nails French-speaking Quebecers’ sense of vulnerability on the head. This is precisely what is so often misunderstood about Quebec: behind the hedonism, the fireworks, the jaywalking, the prize-winning filmmakers and the general hoopla, there is a sense that the lights may go out, perhaps not at any minute, but eventually. As a result, we are burdened with a permanent knot in the stomach which makes us want to party, drive dangerously and rudely ask people what country they are from.

Joking aside, this survival business does influence the way we treat one another. Among the old-stock French Quebecers, there’s a sense of “I know you!” (even though of course you don’t), a feeling that we’re all in this together, a real bond among people that I haven’t felt anywhere else save Newfoundland, Canada’s other distinct society. It’s a great feeling if you happen to be inside that circle, but not so great if you happen to be on the outside looking in.

Which brings us back to the immigrant question. In Quebec, a foreigner is not simply someone who looks, talks or eats differently. He or she is someone with the potential to blur the lines of a proud 400-year history, maybe even blot it out, seeing the natural tendency of immigrants to join the English-speaking ranks in Quebec. Hence the fear of the outside and tendency to hunker down. I wish it were otherwise. I wish we could cash in on the effervescence, ingenuity and creativity that comes with existential doubt and leave the finger-pointing aside.

But, hey, according to the survey, we still believe in being nice.