Quebec says it's on track for $2.2-billion surplus in current fiscal year 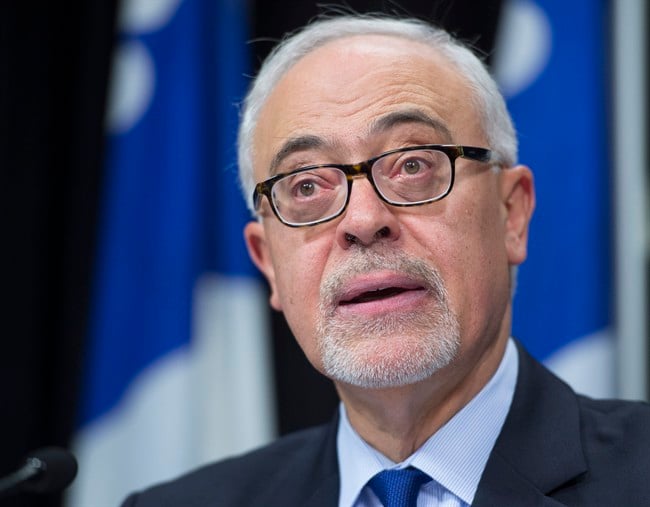 QUEBEC – Quebec is projecting a higher than expected surplus of $2.2 billion in the current fiscal year and is also abolishing a health tax two years ahead of schedule.

Information available over the summer led the government to call for a surplus of $1.8 billion for fiscal 2016-17, which ends next March 31, but Finance Minister Carlos Leitao said Tuesday that provincial revenues have increased more than expected.

Leitao said when the Liberals entered office in 2014 they faced projected deficits of up to $7 billion.

“If we didn’t do anything about the deficit we were going to run straight into a wall,” he said after his budget update.

The minister said the Liberals will use the surplus to invest an additional $410 million per year in the health and education sectors.

He added the government will boost its infrastructure fund by $400 million in the 2017-18 fiscal year, which begins next April 1.

Moreover, Quebec will add roughly $2 billion this year to a fund dedicated to paying down the debt, adding the province’s debt as of last March was $600 million lower than a year earlier.

“For the first time since the 1950s, Quebec’s gross debt is decreasing,” he said.

Quebec’s gross debt as of March 2016 was roughly $203 billion, representing 54 per cent of its gross domestic product — the second-highest ratio in the country after Newfoundland and Labrador.

The Opposition Parti Quebecois said the government’s reinvestments in health and education are a fraction of what was reduced from the budget over the last two years.

PQ finance critic Nicolas Marceau said budgets in the education and health sectors have been reduced by a total of $2 billion since the Liberals’ election in 2014.

“The surplus was created on the backs of the most vulnerable,” he said. “On the backs of children and the elderly and through tax increases.”

Francois Legault, leader of the Coalition for Quebec’s Future, said the health tax cut — which his party calculates amounts to roughly $140 per family a year — is nothing compared to the taxes and fees the Liberals have charged Quebecers since 2014.